Habituation of wildlife can lead to dangerous encounters 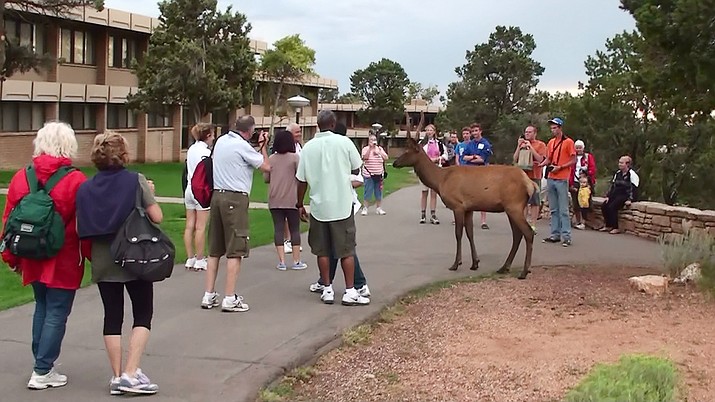 Elk can be seen nearly anywhere along the South Rim. Grand Canyon wildife biologists remind people not to approach elk, as they can become suddenly aggressive during rutting and calving season. 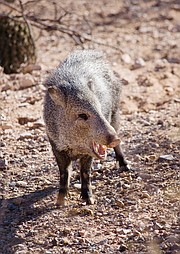 Javelina prefer to escape rather than attack, but they can charge and bite if cornered.

GRAND CANYON, Ariz. — Elk and mule deer grazing in your backyard might seem like a beautiful view as you sip your morning coffee on the back porch. You may think: pouring a little food out there shouldn’t cause a problem, right? It’s winter, after all. It’s hard to forage under two feet of snow.

But Larry Phoenix, field supervisor for Arizona Game and Fish Department’s (AZGFD) Flagstaff office, said the reality is not quite as serene.

Animals who are fed and approached routinely by humans become habituated — they lose their healthy fear of humans. And when an animal that weighs hundreds of pounds isn’t afraid, the results can be dangerous, as residents of Flagstaff’s Continental Country Club discovered last month.

According to Phoenix, residents in the area had been leaving food and water out for deer, leading to several of the animals venturing further and further into the community. A large mule deer buck living near the community became accustomed to living near humans and receiving food from a bucket, and therefore any human with a bucket became a potential food source, leading the deer to fearlessly approach people in hopes of landing lunch.

Phoenix said he had dealt with the same buck before, saving him after he got his head stuck in some wire. He hadn’t caused a problem in the past, but this time was a unique situation, he said. Mule deer are slightly larger than the white-tailed variety, and while they don’t appear dangerous, the males especially can charge at people and pets if they feel threatened.

“What really tipped the scale is that it’s rutting season right now,” Phoenix said, “and male deer begin to exhibit aggressive behavior to show dominance over the females in their herd, and also to establish their breeding rights as the alpha male.”

Phoenix said after they received reports of the buck chasing pets and not backing away when approached by humans, he and other game and fish officers tried to use non-lethal methods, including rubber bullets, to haze the animal out of the area.

When those methods failed, the buck was euthanized.

“We don’t want to have to kill anything,” Phoenix said. “But you have to determine a point when the animal becomes a danger to the public, especially children and the elderly who may not be able to move out the way in time if he charges.”

Gregory Holm, wildlife program manager at Grand Canyon National Park, said while the park hasn’t seen any aggressive behavior out of the ordinary, feeding and approaching the park’s wildlife is still illegal, and for good reason.

Approaching animals with food or using food to coax them closer to photograph them or touch them is dangerous for both visitors and animals. Even if the elk and deer don’t become aggressive toward amateur photographers, some are hit and killed by cars while standing too close to roadways because of visitors offering food from their vehicles.

“It’s a struggle, even in a park setting where people know it’s illegal,” Holm said.

Because food is the primary reason wildlife become dangerously habituated, the park has to carefully manage its food waste, Holm explained. Small animals, like squirrels and ravens, are attracted to dumpsters near hotels and restaurants. Not only do people feed them, but there’s a large source of food open for the taking.

And waste left for even a short period of time is quickly noticed by the park’s feathered residents.

“After this latest large storm, trash pickup was delayed for a couple of days and the dumpsters were overloaded,” he said. “I noticed the ravens key in on that pretty quickly, as they do.”

Not all of Grand Canyon’s wild residents appear willing to cohabitate with their human neighbors, though.

Javelina, which travel in small herds, can be seen as far north as the Grand Canyon, although Phoenix said they’re not fully adapted to the cold winters and tend to avoid deep snowfall, as they are low to the ground and have difficulty regulating their body temperature.

Visitors should be cautious, since there have been recent reports of aggressive javelina near the Grand Canyon Visitor Center and Mather Point, but Phoenix said the animals shouldn’t attack unless cornered with no alternative escape route.

“Javelinas mate year-round, and they may charge to protect their young, but otherwise if approached, they’re going to turn and run,” he said. “They aren’t predators, but if they feel threatened, they do have a nasty bite.”

While animals like ravens and even deer may consider populated areas an easily-accessible and never-ending food source because of waste and human intervention, predators such as mountain lions and bobcats may come for an entirely different menu.

Rodents and small animals have lived alongside humans since they abandoned the nomadic hunter-gatherer lifestyle and began to build agriculture-based communities. With rodents and small mammals, logically, come predators that feed on them.

“Something we live with here in northern Arizona is predators,” Phoenix said. “Mountain lions move through the territory between here and Flagstaff.”

Phoenix said that a mountain lion recently spotted in Williams has been in the area for several years, and has taken about four small dogs in that time. Although police reports from the town indicate that the animal doesn’t show much fear of humans, Grand Canyon wildlife biologists Holm and Brandon Holton explained mountain lions generally prefer to avoid populated areas and take large prey, such as deer.

Bobcats, while stalking the outskirts of communities like Sedona, rarely attack people, preferring instead to feed on small prey like squirrels, mice and rabbits. When they do attack, they are likely to be suffering from rabies.

A bobcat in Sedona was recently killed by AZGFD officers after it attacked four people, a dog and a domestic cat. Tests later confirmed that the animal was rabid.

Asked if the harsh winter and snowfall played any role in predators seeking out populated areas as an alternative food source, Holm, Holton and Phoenix said it played only a small role, if any.

Holton said bobcats can be seen everywhere, as there is an abundance of rodents and small prey near populated areas. He also said there is credible evidence that suggests small prey animals may seek out development as safety against their natural predators.

It’s something that predators have also picked up on.

“Predators like mountain lions may be drawn to the developed areas if adequate levels of prey are available,” Holton said. “But it’s not something we’ve had a problem with here in the park.”

Mice, squirrels and birds are a primary food source, so there is always the potential for predators to seek them out. Steps can be taken to ensure the safety of people and pets, however. AZGFD suggests keeping food waste placed outside to a minimum, bringing pets inside, and not leaving water or food sources out on the open.