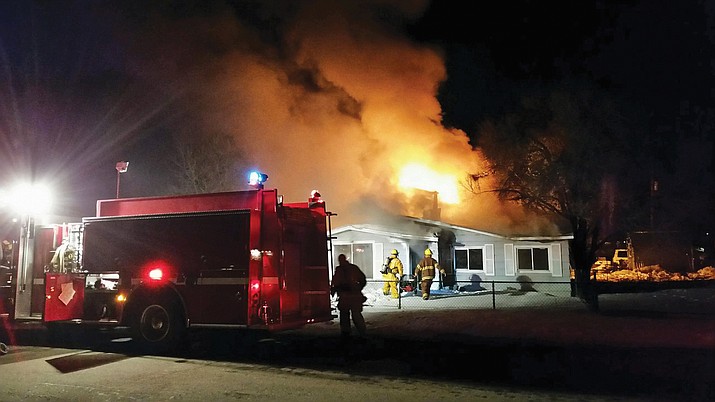 WILLIAMS, Ariz, — A woman is facing drug possession charges, and a residence that was known to house drug users and was a location for frequent drug activity was a total loss after a fire ravaged the structure in Williams Feb. 2.

According to Williams Police Chief Herman Nixon, officers responded to a report of a house fire with an occupant still in the home on E. Fulton Avenue at 10:30 p.m. 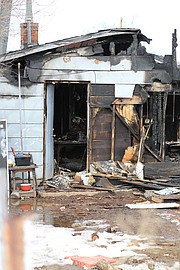 When officers and firefighters arrived, officers determined the house was empty, but found two dogs behind the house and a person living in a trailer in the backyard as flames tore through the back of the house.

The fire department fought the fire for several hours and determined it was out at 3 a.m. No occupants or responders were injured in the incident.

According to Nixon, officers arrested the woman at the scene for possessing five grams of methamphetamine.

Nixon said police officers had responded to numerous drug related and domestic violence calls at the location over the past few years. He said neighbors have become frustrated with the frequent drug activity despite several arrests made by officers. Many of the residents lined the street as the house burned.

“You know it’s pretty sad when the neighbors are out in front clapping. “

“We had a multiagency approach here,” he said. “Ponderosa came in to back us up.

Nixon said officers were concerned about the dangers of responding to a fire in a location of known drug activity.

Fire investigators from Flagstaff Fire Department work with Williams officials to determine the cause of the blaze.

“We don’t know what chemicals are in that house, and of course their job as first responders is to save lives,” he said. “This thing was totally engulfed and I’ve got my officer and his intern trying to get into this house to see who is in there.”

Moede said the department was advised about the residence being involved with drug activity, which caused a heightened concern for firefighter safety.

“You take everything in stride,” he said. “We go in there slowly, not running through the place. We open every window to get the smoke out of there so we can see.”

Moede said first responders did not find any obvious hazardous materials that would cause extra concern for the firefighters.

“We were making arrests out of there all the time,” Nixon said. “It is difficult to do more. We have to have proof and we have to have people that are willing to talk. We need to follow the law.”

Nixon said it is difficult for a small department to conduct extensive drug investigations and a narcotics unit is the best way address the problem.

“We don’t have a big enough drug problem for a task force to come in,” he said. “We can only be more reactive than proactive because we don’t have enough officers.”

Nixon said fire investigators from Flagstaff Fire Department were working to determine the cause of the blaze, but at this point it appears the fire was a result of a manipulated electrical system.

Drug houses are a concern in many neighborhoods across the country. Some police departments are taking advantage of a legal tool called a chronic nuisance abatement ordinance which allows officers to shut down certain houses.

To utilize the nuisance abatement, officers need to step up surveillance and count on neighbors to call in tips about the house and record activity at the residence.

Participation by the community, police and the courts is a necessary part of the process.

In an abatement, residents are typically evicted and the house is boarded up for a year. Abatement is not a quick fix, though. It takes months for police to collect the information they need, often with the help of neighbors. Then a civil suit has to be filed to shut down the house, with or without the cooperation of the owner.

Certain activities are found to be common at drug houses. Generally one or two of these indicators does not mean a drug house is in a neighborhood. And indicators are not evidence of a drug house. The following are some circumstances that cumulatively create a reasonable amount of suspicion that warrants further investigation.

• Vehicles stopping for short stays of 20 minutes or less, just long enough for someone to go

in and make a buy.

• An inordinate number of vehicles.

• Cars left running with someone in the car while another runs inside.

• People parking away from the premises and walking in.

• Disoriented or paranoid visitors or other neighbors.

• People carrying in tools or electronics, other items that may be used to sell or trade for

• Deterioration of the premises or grounds.

• Chemical containers being brought in/out, or left around the premises.

• Chemical or caustic smells emitting from the house or vehicles.

•Occupant is awake or sleeps for days at a time.

•Lots of young/teenage visitors, especially when the occupants do not have children of

•Increased crime in the neighborhood, especially crimes of opportunity like vehicle thefts