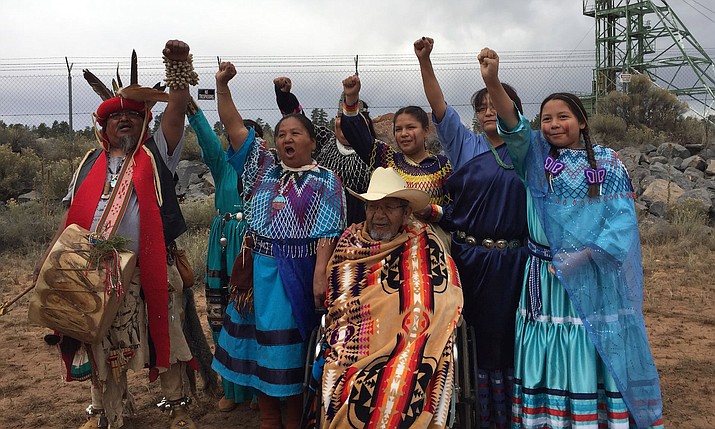 Havasupai Tribal members protest in front of Canyon Mine, a uranium mine near the South Rim of the Grand Canyon.

GRAND CANYON, Ariz. — A coalition of Havasupai tribal members and environmental groups breathed a brief sigh of relief as the Ninth Circuit Court of Appeals in San Fransisco, California handed down a verdict Dec. 12: the 20-year moratorium on new uranium mines was upheld.

The group had filed suit with the court more than a year earlier to save the moratorium put in place in 2012 by Barack Obama’s administration.

The National Mining Association had previously sued in a lower court to overturn the ban, which was put in place amid concerns that groundwater for millions might become radioactively contaminated. The ban also took into consideration the effect on Native American cultural sites and views from Grand Canyon National Park.

In its ruling, the court determined the ban should remain in place, stating “withdrawal of the area from new mining claims for a limited period will permit more careful, longer-term study of the uncertain effects of uranium mining in the area and better-informed decision making in the future.”

Carletta Tilousi, a Havasupai Tribal Council member who has been a vocal opponent of uranium mining near her ancestral home, traveled to Washington D.C. to reiterate the tribe’s opposition to any changes to the recently-upheld ban.

“What happens to that Red Wall-Mauv Aquifer and springs happens to the Havasupai,” Tilousi told the House subcommittee on energy and mineral resources, referring to the aquifer that is responsible for Havasu Creek, the tribe’s sole water source.

“I am here to tell you that uranium contamination in the aquifer will not only poison my family, my Tribe, ancestral lands, and me, but also millions of people living downstream,” Tilousi said. “Opening up this area to uranium and other mining would be tragic and an environmental nightmare.”

The Department of Agriculture recently suggested revisions to the 20-year mining ban, although it did not suggest revoking it.

Although there was cause for celebration after the verdict, the court also ruled against Havasupai and a coalition of environmental groups, allowing the recently-reopened Canyon Mine to proceed.

The group had sued to keep the mine from operating until an updated plan of operation was put in place, including consultation with the tribe. Canyon Mine, which sits in the shadow of Red Butte, a sacred mountain to the Havasupai and other regional tribes, was first approved 1986. Although the mine went dormant after uranium prices plummeted in the early 1990s, the U.S. Forest Service approved reopening of the mine in 2013 without seeking an updated plan of operations.

The tribe argued that the Forest Service granted permission to resume mining operations without consideration of new developments and technology, violating its legal obligations under the National Historic Preservation Act to consult with the tribe concerning the irreparable harm the mine will have on the sacred site and implementing measures to prevent damage.

“We are disappointed that the judges ruled against the common-sense argument that a 29-year-old permit to mine uranium on public lands doesn’t need to be reviewed and updated with new information,” said Roger Clark, Grand Canyon program director for the Grand Canyon Trust, who joined the lawsuit with the Havasupai Tribe.

“They dismissed compelling new evidence of water contamination and ignored a whole new generation of citizens who were born after the Forest Service decision, but who now have to live with its consequences.”

Richard Hughes, who represented the tribe in both lawsuits, said the Ninth Circuit court’s ruling is likely the end of the road. The only court that can overturn its ruling is the U.S. Supreme Court.