Yes, Virginia, there really is a Santa Claus, and he’s calling you 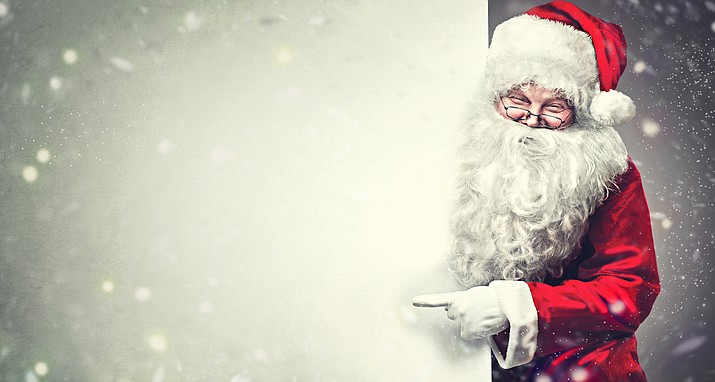 GRAND CANYON — Think there’s almost a conspiracy out there to squelch your child’s belief in Santa Claus?

Technology can help you fight back.

For years the big guy in red has had to contend with aggressive pushback from the PC crowd who apparently wish he’d just pack up his sleigh and stay home in the North Pole. Department stores were pressured to nix their Santa stand-ins. Schools changed their calendars to say “winter holidays” instead of Christmas.

And let’s not even talk about the damage done to his image by Billy Bob Thornton’s “Bad Santa” movies.

Santa, being Santa, could keep right on ho-ho-hoing when lesser immortals would’ve sicked their elves on them.

Clearly, just quoting pro-Santa experts like Professor Jacqueline Woolley, chair of the Psychology Department at the University of Texas at Austin, wasn’t going to cut it.

“Believing in impossible beings such as Santa Claus may exercise children’s counterfactual reasoning skills,” she’s written. “The kind of thinking involved in imagining how nine reindeer could fly through the sky carrying a heavy sleigh may well be the same kind of thinking required for imagining a solution to global warming or a way to cure a disease.”

Which is where a website called www.PackageFromSanta.com comes in.

First started a decade ago as a pure labor of love by the husband-and-wife team of Dale and Carey Gruber operating out of their home in suburban Washington Township, Michigan, the business has grown to the point where it now includes a 21st-century app — downloadable at the iTunes and Android App Stores — that lets users worldwide personalize a phone call to their kids from none other than Santa himself.

As in, say, “So! Virginia, I couldn’t be prouder of you for being such a good girl! And I’ll see you soon.”

And completing the effect for tech-savvy kids: both their own and Santa’s name and photo appear on their smartphone’s call screen (with the call shown as originating from the “North Pole Workshop”).

“The reason we continue to do this is that it often seems like there’s an effort to take the joy out of Christmas,” explains Dale Gruber, who’s also a graphic artist. “Whereas we think a child’s innocent belief in Santa is something worth fostering.”

You can watch a video here. But know the site offers three different packages at very affordable prices — all also include a letter from Santa and a personalized Santa video — and feature items like Christmas cocoa, “genuine reindeer food,” and a tin of Mrs. Claus’ Famous Sugar Cookies.

Think of it as Santa’s ultimate ho-ho-ho.