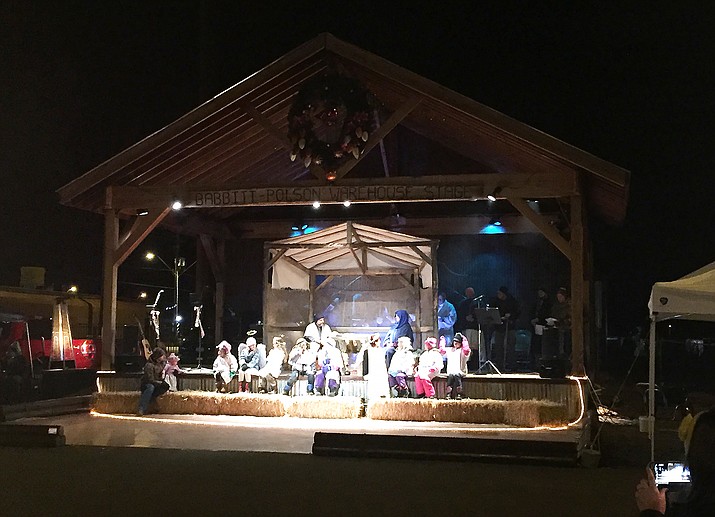 The 2017 Christmas Nativity pageant is coming Dec. 22 to the Babbitt-Poulson stage in Williams.

“We have such a great experience last year,” said event organizer Kerry-Lynn Moede. “We are very excited for this year’s program.”

The first organizational meeting was held in early November and Moede said she was overwhelmed with the response. She said dozens of people are volunteering to participate in the program.

Moede said she received a lot of positive feedback after last year’s performance, and the group has implemented some changes for this year.

“There won’t be a band this year, because they almost froze to death last year,” Moede said. “But we ironically have more music this year, more songs and added a dance number.”

Moede said they also found a better sound system and are going to provide more seating this year.

“We filled every chair we had last year,” she said.

She said they are also serving refreshments before the show this year instead of after like they did last year.

Moede said she also believes the pageant might attract some Williams residents and visitors who do not attend any local churches or be involved with any groups.

Moede said the pageant is Biblically based and won’t involve Santa Claus, reindeer or anything that differs from the Christmas story. The group is organizing volunteers for actors, singers, musicians and technicians.

Moede said the choir has been rehearsing weekly under the direction of Billie Jene Watt.

Several other musicians will be participating in an adult and children’s choir. Moede said any children still interesting in participating can attend the dress rehearsal with their parents Dec. 21 at 5:30 p.m. and then be in the play

Moede has organized pastors, deacons and community members to read from the Bible.

For the Three Wise men, Moede said riders from the Cataract Creek Gang will perform on horseback.

Moede said many local businesses, organizations and residents have stepped up to help already. She said several businesses have donated building materials for the stage sets, as well as gas heaters, covered fire pits, chairs and costumes.

Moede said the pageant is free to the public and hopes residents and visitors will turn out to watch.

“Nobody is making a dime off of the event,” Moede said. “It truly is a community event to celebrate the Bible story of the birth of Christ.”