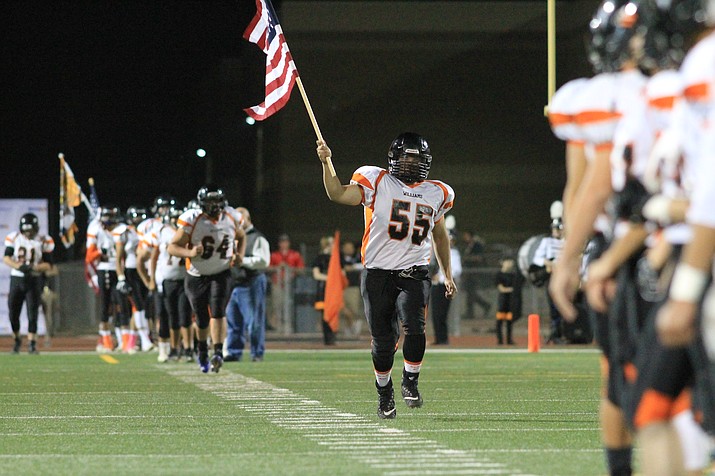 The Williams Vikings take the field during the 2017 1A State Championship on Nov. 11 in Maricopa, Ariz. 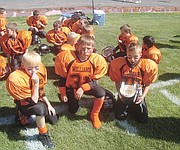 In 2008, many of the 2017 State Championship Vikings were just beginning their football careers at the ages of five to seven with the Williams Tigers. Pictured are Payce Mortensen, Antoine Zabala and Tate Grantham.

The road to the 2017 State Championship for the Williams Vikings began years ago when many of the players weren't even in school yet.

The love of football in Williams has a long history, and the development of the players begins when many of the players are just five and six years old. The community has developed a youth football program in the Williams Tigers and Bengals, that teaches players aged five to 12 the basic skills of the game. When those players mature and reach middle school, the Falcons program develops more advanced concepts of the game.

As the players finally reach high school, the skills gained at the lower levels have prepared the players for a higher level of play as Vikings.

In 2008, many of the 2017 State Championship Vikings were just beginning their football careers at the ages of five to seven with the Williams Tigers.

In the Oct. 14 edition of The Williams News, the Tigers had just won a game against the Prescott Valley Wolf Pack, 42-14 in 30 degree weather. The win put the Tigers 5-1 for the season.

In 2008, many of the 2017 State Championship Vikings were just beginning their football careers at the ages of five to seven with the Williams Tigers.

In 2010, many of the Tigers players moved up the Bengals team, comprised of nine to 12 year-olds.

The team finished the season in style as they won the Youth Football National Championship Tournament in Las Vegas. The Bengals beat the Marana Broncos 12-7 in the semifinals and the Las Vegas Spartans 26-12 in the championship.

In 2013, many players entered middle school and began playing for the Williams Falcons under Coach Tad Wygal.

In 2013, many players entered middle school and began playing for the Williams Falcons under Coach Tad Wygal.

An October edition of The News described a 52-0 win against Page. During the game, Lopez returned the opening kickoff for a touchdown

Soria was noted for his passing, and Lopez, Diego Pedraza and Jose Pedraza had standout running games. Emmanuel Flores, Jose Pedraza and Gutierrez were noted for their exceptional defense. With two games to go, the Falcons were 6-0 and had beat Cottonwood, Chino Valley, Kingman, Joseph City, Bagdad and Page.

In 2014, many of the 2017 State Champion players got their first taste of high school football. The Vikings went 5-5 overall, 3-3 in the section playing 11-man football. They finished the season 24th in Division V (now the 2A Conference) standings, and fourth in the VII Section. The team beat Camp Verde, Chino Valley, Red Rock, Rock Point and Greyhills.

As a freshman, Lopez got his feet wet carrying the ball 35 times for 163 yards; he also had nine receptions for 198 yards. Grantham, also a freshman, had 10 carries for 41 yards. Soria carried the ball 37 times for 304 yards and caught 15 receptions for 259 yards. On defense, Lopez contributed 26 tackles and Grantham contributed 27. Diego Pedraza had three carries for 35 yards.

In 2015, the Vikings moved to 8-man football and went 5-4 overall, 4-1 in the section. They beat Telesis Prep, El Capitan, Mayer, Fredonia and Joseph City, and lost to Pima, Bagdad and Mogollon. They lost in the first round of the state playoffs to Mogollon, 14-12. Pima won the championship that year.

Sophomores Soria, Diego Pedraza, Grantham and Perkins began to see more playing time. Soria became starting quarterback and completed 50 of 106 for 761 yards. He was also a leading rusher with 491 yards on 94 carries. Grantham followed with 259 yards on 42 carries. Pedraza had 208 yards on 35 carries. Grantham caught 18 passes for 166 yards. On defense Grantham had 63 total tackles followed by Perkins with 58. Pedraza kicked 24 times for 804 yards.

In 2016, the Vikings were stopped short of a state championship win when the Bagdad Sultans beat them 60-6.

In 2016, the Vikings became more confident in the 8-man game and went 9-2 overall, 6-0 in the section and were the runner-up in the 1A State Championships, where they lost 60-6 to Bagdad after beating Superior 42-40 in overtime in the semifinal. The Vikings' only losses that season were to Bagdad.

Soria, now a junior, completed 99 of 188 for 1548 yards and led again in rushing for 981 yards on 101 carries. He was followed by senior Tyler Smith with 869 yards on 91 carries. Lopez went 144 yards on 23 carries and had 25 receptions for 371 yards. Grantham led the defense with 111 tackles, including 48 solo tackles. He was followed by freshman Chance Pearson who had 72 tackles and 22 solo tackles. Perkins had 69 tackles, 32 solo tackles and seven sacks. Lopez had five interceptions. Lozano kicked 2016 yards on 42 kicks. Pearson had returns of 467 yards averaging 29 yards.

The Vikings won the 1A State Championship 57-14, Nov. 11 against the Superior Panthers

In 2017, the Vikings returned with a goal to win the state championship. In just the second game of the season, thee Vikings faced the 2016 State Champion Bagdad Sultans.

Leading throughout the game, the Vikings lost to the Sultans, 28-24, on a 55-yard desperation pass with three seconds to go in the game.

Two games later the Vikings lost to Mogollon 34-24. Despite the tough losses, the Vikings went on to win the next four games and were in fourth place as they headed to the state playoffs.

At the playoffs, the Vikings soundly beat the Salome Frogs 55-6, and avenged the earlier season loss to Mogollon with a 64-52 win in the semifinal.

Surprisingly, Superior upset Bagdad in the other semifinal game, allowing the Panthers to meet up with the Vikings at the state championship game Nov. 10.

In the first half of the state championship game, the Panthers and the Vikings seemed well matched, going into the locker room with the Vikings leading 22-14.

After the half, though, the Vikings lit up the turf and outscored the Panthers by 41 points to take the win 57-14.

The win was the first state championship for the Vikings since 1993.