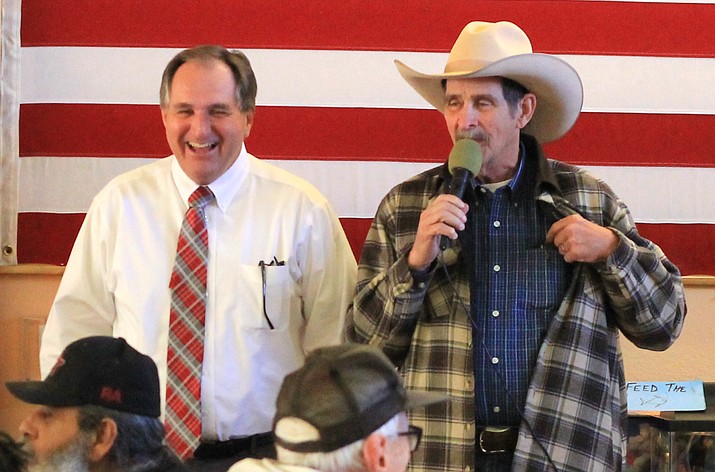 William Lee is introduced by Mayor John Moore at the Senior Center holiday dinner Dec. 6. Lee is beginning his first week as city manager of Williams.

William Lee is excited to become part of the Williams community.

“We are more than pleased, more than excited to be a part of the community,” Lee said.

Lee began work as the new city manager for Williams Dec. 4 after nine years as the city manager in Somerton, Arizona, a community of 17,000 on the outskirts of Yuma. In the first few days of the job, Lee visited with city employees, met residents and visitors and shared a holiday meal at the Williams Senior Center.

“I’m duly impressed with the staff that we have,” Lee said. “Everyone seems very dedicated to their job and doing the very best they can for the citizens of Williams.”

Lee steps into the position following a six-month vacancy after the departure of former city manager Skylor Miller.

Lee grew up in Yuma, Arizona and spent the past 27 years working in city government positions. He went to Yuma High School and took college courses in public management.

His first position in city government was with the city of Somerton as the parks and recreation director. Besides parks management, he found himself responsible for a variety of city duties.

“In small communities you wear many hats, so that kind of warped into being their grant writer as well,” Lee said.

Lee continued in that position for eight years before moving to Camp Verde, where he took another position as a parks and recreation director.

“That job kind of evolved into becoming their general services director where I was over the streets department for several years,” Lee said.

In 2007, Lee was offered a position as the city manager in Somerton.

“It just happened that the day before they called, my father called from Yuma…and said he had been diagnosed with Alzheimers,” Lee said. “So the stars were aligned for me to move back down there.”

Lee said while he was in Somerton the city had a large focus on repairing roads, and developing community parks. Lee said the community had just finished a purchase of 55-acres of land to develop a large community park prior to his departure.

“We borrowed 7 million to repair our roads down there,” Lee said. “It’s also a bedroom community. Parks are very important to the community.”

Lee said the community had also just approved a bond for a new high school.

“For the past 100 years, Somerton (students) had been bussed or drove to Yuma,” he said.

Lee said the city also recently completed an evaluation and upgrade to its water and waste water treatment plants.

“We spent a lot of time reducing our costs,” he said. “We went through all of our city facilities, improving our pump system and making sure we had the most energy efficient pumps for our water and our waste water facilities.”

Lee said he and his wife have been interested in moving to northern Arizona for many years.

“We enjoy the more northern climate of Arizona,” he said. “We looked at this position a couple times as it came open over the years; this time the timing was right for us.”

Lee said he looks forward to working in a smaller community where he can participate in a variety of roles with the city.

“When you work in a small community, you’re given many responsibilities,” he said. “I feel like working in a smaller community is very enjoyable because you get to do all kinds of different things.”

Lee said he plans to spend time getting to know the community and the city council members before making any suggestions for the direction of the city.

“As for goals, I’m just waiting for the mayor and council to give me a little direction there,” he said. “Obviously I’m going to see some things that I may recommend to council, but it’s a little early on in that process yet.”

Lee’s wife, Amber, is a school teacher in Somerton and will join him at the end of the school year. They have two children and four grandchildren.