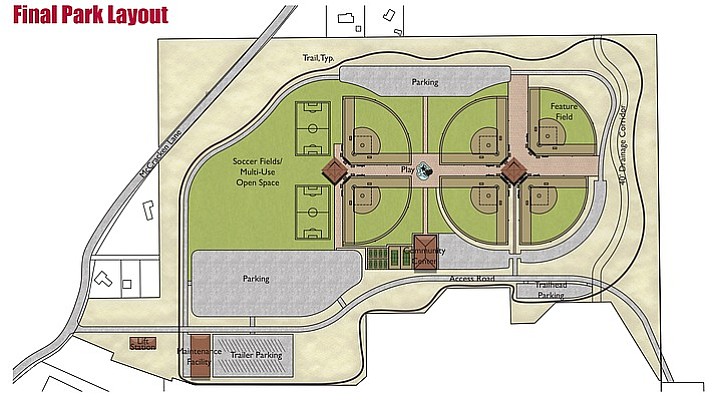 Courtesy of the Town of Camp Verde

Kimley Horn’s design for the Camp Verde Sports Complex, which will be built east on SR 260 off McCracken Lane. The Camp Verde council voted to approve the funding mechanism associated with building phase one of the new park.

CAMP VERDE, Ariz. —Building out the first phase of the new Camp Verde Sports Complex should take about $7 million – conservatively – according to Town Manager Russ Martin.

Wednesday, the Camp Verde Town Council unanimously approved the issuance of as much as $7 million in revenue bonds to begin work on that complex.

Now that the sale, execution and delivery of municipal bonds has been accepted, folks will likely have two questions.

When will construction begin? And how will the money be paid back?

The more glorious of the questions, the shovels turning the dirt, is expected to happen sometime in spring 2018, says Camp Verde Town Manager Russ Martin.

Phase one involves the grading and infrastructure of the entire 110-acre uber-complex off SR 260 and McCracken Lane, as well as potable water, sewer, electric, irrigation water, stormwater and drainage channels, basically “all those things we need buried in the ground,” says Camp Verde Parks and Recreation Division Manager Mike Marshall.

“As much as we can get done,” Marshall says.

Marshall also says that the Town of Camp Verde will “actively look” for grant money to create the desired amount of ball fields, which according to the Kimley Horn design for the complex would include four additional ball fields beyond the first phase.

“We can’t go for grant money until we have the infrastructure in,” Marshall says. “Once the infrastructure is in place, when an opportunity is there, we can grab it. We want to make sure we’re flexible to take advantage of grant opportunities. And we’d love to have citizen involvement, like a Friends of the Park, for example.”

Which is why the Town is “going to spend more money up front on the infrastructure to leverage the opportunities,” Martin says.

The “benchmark” for paying back the bonds is $350,000-a-year for 25 years, says Camp Verde Mayor Charlie German.

“This is the longest and largest commitment we’ve made,” Martin says. “An affordable commitment. If the economy changes or shifts, we can still handle it.”