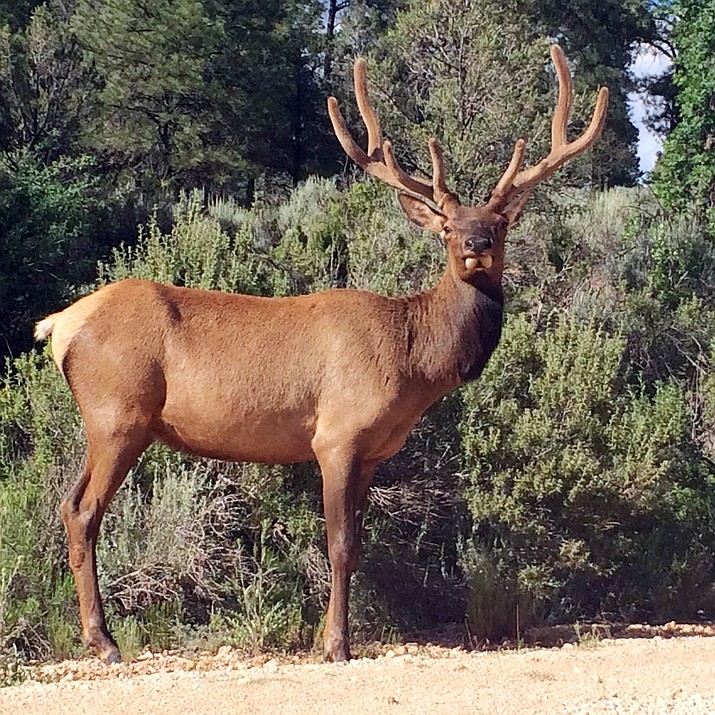 A young elk poses for the camera. Elk are just one of the many species that call Kaibab National Forest home. They are often easily photograhed, but visitors are encouraged to use caution and stay at a safe distance (at least 100 feet).

FLAGSTAFF, Ariz. — The Arizona Game and Fish Department (AZGFD) is offering up to $8,000 reward for information leading to an arrest of yet another suspected poacher.

The latest case involves a mule deer buck that was found dead near Mount Logan on the North Rim of the Grand Canyon. The deer was recovered in game management unit 13A off County Road 5 and is suspected to have been killed sometime between Nov. 17 and 19.

A lawful deer hunt started Nov. 17 in unit 13A, but evidence at the scene suggests that the mule deer buck was possibly poached and edible portions of the animal were left to waste.

“This crime was obviously not the behavior of ethical, responsible hunters,” said AZGFD Wildlife Officer Luke Thompson. “We’re asking anyone who may have been in the area or has knowledge of the crime to come forward with information on this case. Poaching is a crime against all Arizonans and will not be tolerated. One tip could be all that’s needed to bring a poacher to justice.”

Anyone with information about the case can call the department’s Operation Game Thief Hotline toll-free at (800) 352-0700 and provide case number 17-004571 or use the online form at www.azgfd.gov/ogt. Callers identities will be kept confidential and people can report anonymously if needed.

A string of poachings across the state has game officials concerned. Since October, a total of three mule deer and two cow elk have been illegally taken and left to waste, according to AZGFD. Flagstaff resident Loren McReynolds is also still under investigation for illegally taking wildlife on more than one occasion, including an atypical mule deer buck allegedly poached from within Grand Canyon National Park.