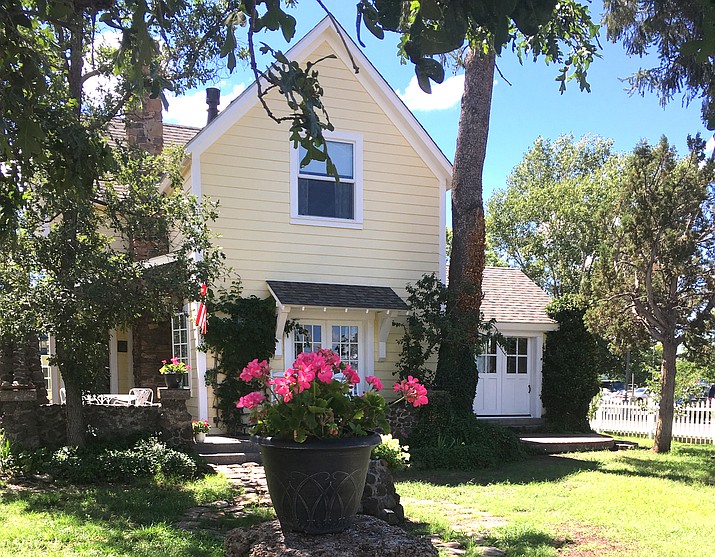 Although the warm summer temperatures and monsoonal rains are coming to an end, a garden party is revving up at the Historic Yellow House.

Kerry-Lynn Moede, the owner of the home, is hosting her second annual Garden Sale and Home Tour Sept. 2 from 9 a.m. to 1 p.m.

The event will showcase the extensive garden Moede has established at the home while hosting artists, musicians and vendors at the end. Moede will also be giving guided tours of the historic home.

“People ask all the time to see the house,” she said. “This is an organized and scheduled way to open the doors, let people see the house and tell them about it.”

Moede said many people are interested in how the home was restored and seek ideas about how to restore their own homes. She also has many people

The Yellow House gardens are in bloom.

“I love the garden,” she said. “I spend a lot of time out there and this allows me to share gardening ideas.”

Moede said the vendors this year include several artists such as water colorist Donna Easton and metal artist Tom Williams, who will be having a copper rose art demonstration and workshop for those who pre-register.

There will also be food booths, including local honey vendor Lita Ebersole and a representative giving out olive oil samples.

Pianist Billie Jene Watt will be giving multiple performances from the porch throughout the event.

“There will also be a lemonade stand and John (Moede) is making cinnamon rolls and selling them to raise money for the Williams Fire Department,” Moede said.

Moede is accepting donations for the home tour that she plans to give to the Williams Alliance for the Arts.

Moede and her husband John, purchased the home from the Negrette family in 2012. The home was originally built by the Saginaw Manistee Lumber Company and used as a bunkhouse and office. In 1919, the Negrettes, a pioneering Hispanic family, bought the house for $810.

Around 1927, the family made some additions and added the distinctive stonework to the exterior. The house remained in the Negrette family for 93 years.

Once the family was gone, the house sat empty for more than 10 years, falling into disrepair and blight. Feral cats and squatters took their toll on the once beautiful property. After watching the home for years, Kerry-Lynn Moede decided someone needed to do something, and purchased the home.

Acting as the general contractor, Moede saved everything historic possible and brought the house back to life. Now the home is part historic museum and part boutique hotel, as the Moede family has turned the house into a vacation rental and community event space.

While doing the renovations of the property, Moede tried to maintain the historic character of the home. She restored the Victorian farm folk style and preserved the basalt stonework. She said her goal was to restore the home to its former glory and not change it or rebuild it.

She said she reproduced large photographs of the historic home and pasted them in locations for carpenters to reference as they restored the home.

Moede worked diligently following the renovations to get the house listed on the National Register of Historic Places. She spent over 100 hours completing the extensive application, recording historical and architectural details about the property. After submitting seven different version of the application, receiving approval from city officials and the State Historic Preservation Office, the home received approval to be listed on the National Register in 2014.

According to the National Register, the home was listed as an excellent example of a Victorian building that was later modified to represent the Craftsman Bungalow movement of the early 20th Century. The stone walls surrounding the property on two sides and the stone well contributed to the significance of the property. Being one of the few two-story buildings and being located near the sawmill and railroad made for a landmark structure.