Vikings dominate 48-0 in opener with Hayden 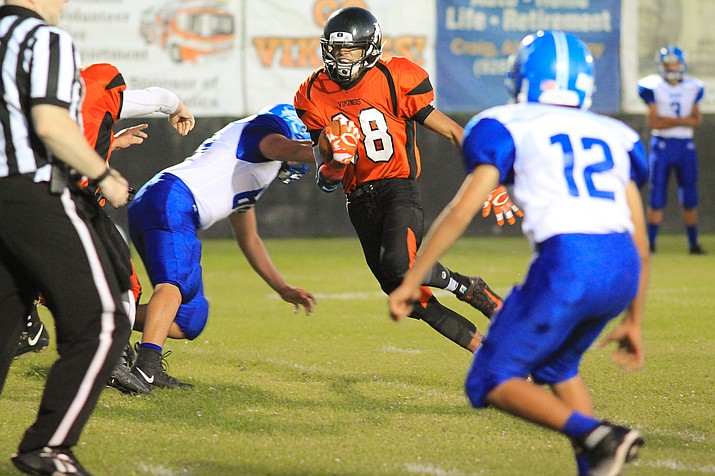 Viking Zack Perkins brings the ball up the middle for a first down against the Hayden Lobos Aug. 26. 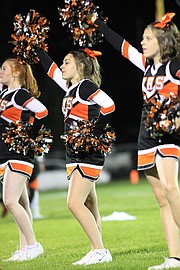 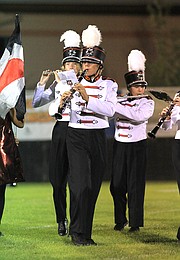 The Vikings band performs at half-time.

The Vikings defense brings down a Lobo runner.

The Vikings came out on the field and dominated as Daniel Lopez ran the ball for a 72-yard touchdown on the first offensive play of the game.

“We scored with a pitch to the left,” coach Jeff Brownlee said. “We scored really quick.” 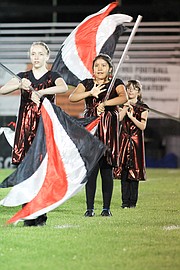 Members of the flag team perform with the marching band at half-time.

“We went in knowing they would be a good football team,” Brownlee said. “But we are faster, quicker and executed a little better and came out with a good win.”

“We spread it around pretty good,” Brownlee said.

Pedraza completed 13 of 19 passes for 172-yards and three touchdown passes.

“You couldn’t ask for anything better out of a quarterback than that,” Brownlee said.

Brownlee said the Vikings ran the offense very well and was impressed with the running support of Lopez, Pearson and Perkins.

“But it all starts up front with the big guys though,” he said. “They controlled the line of scrimmage and allowed us to do a lot of things.”

Brownlee said the Vikings made a few mistakes but the team’s speed and athletic ability allowed them to recover.

“It allowed us to take the negative and turn it into something positive,” he said.

Brownlee said he has been preparing the team for the game against Bagdad Sept. 1.

“We will have to play very well against Bagdad,” he said. “We’re excited for the challenge to face Bagdad again.”

The Vikings last faced Bagdad in the 1A State Championship in 2016 where the Vikings lost 60-6.

“I think its going to be a very competive football game, a good one to watch,” Brownlee said. “The kids are already excited and can’t wait for Friday to come.”

Brownlee was grateful for the fan support at the season opener.

“I’m happy for everyone who was there to support us — the Fire Department.with fireworks, the fans, the band, the cheerleaders,” he said. “It really brings a sense of community and the players love seeing all the people in the stands.”