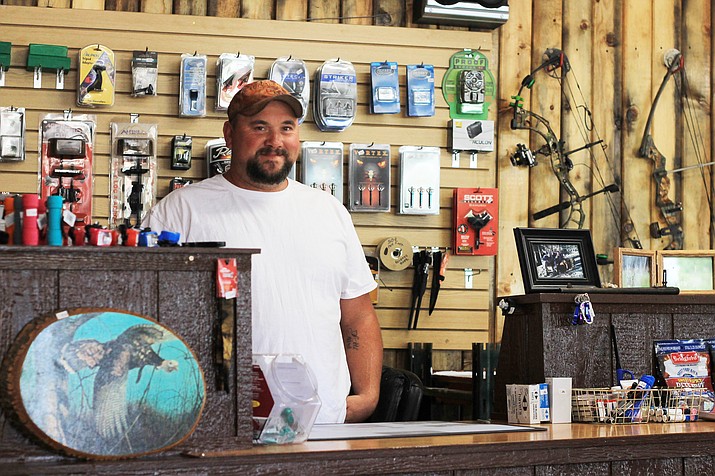 Kevin Overfield is the owner of the new Juniper Creek Outdoors store in Williams.

Kevin Overfield has many fond memories of hunting and fishing in the woods and hanging out in the historic Sportway outdoor store in Williams as he grew up, and he now hopes to give back to the community by opening Juniper Creek Outdoors in Williams.

The store opened last week, and caters to fishermen, hunters, campers and hikers.

Overfield has been an outfitter for 22 years in Flagstaff. He grew up in a family that spent a lot of time in the outdoors hunting for deer, elk and quail.

“But it was never enough for me,” Overfield said. “I was a bit of a fanatic. I couldn’t wait to go deer and elk hunting, I just couldn’t get enough.”

Overfield said by the time he was 14, he had two hunting dogs and would venture out to hunt on his own.

“I got some hound puppies and snuck them home,” he said. “I got to keep them and they turned out to be good dogs.”

When Overfield finished school, he worked a few assorted jobs, but his love of hunting led him to a carrier as a hunting guide.

“I would guide and then in the off season drive trucks,” he said. “But I never found anything I much cared for other than hunting.”

Overfield spent most of his time with clients around Tucson, Wilcox, and the Chiricahua Mountains hunting for deer, elk, mountain lions and bears.

“But you can only pack out so many elk before you get worn out,” he said.

After spending years as a guide, Overfield said he is looking forward to operating an outdoor store. He said the expertise he gained as a guide will help him outfit the store.

“We are focusing on people’s basic needs such as fishing and camping gear,” he said. “And we will rotate our stock based on the season.”

Overfield said he hopes to carry fishing gear for trout, catfish and bass. He said he especially wants to increase his inventory of bass supplies.

“I’d like to bring in more bass lures and bass fishing gear, because it’s getting pretty good around here,” he said.

As hunting season approaches, Overfield said he plans to open the store early in the morning for customers.

“We’ll be open extra early for hunters during the big elk and deer hunts,” he said. “It will probably be about 4 a.m. We’ll have free coffee here, you don’t have to buy anything.”

Overfield plans to stock all types of camping equipment and for hunters, he will have scopes, clothing, calls, scents, arrows, broadheads and more.

“I’m hoping with my guide experience, people will know they have somebody they can talk to who knows something,” he said. “I know a lot about hunting and archery. That has been my life.”

Juniper Creek Outdoors will have a variety of gear for tourists, but Overfield wants the store to especially focus on local residents’ needs.

“When I started guiding it was for the people out of Williams,” he said. “It was great, the best time of my life.”

Overfield said he hopes the store will be a local hang out where people can come in and talk and share. He said he was given the old photo albums that were once in the Sportway store that have many local families in them.

“People have been asking me about them,” he said. “Many of the families have been here a long time. They were kids in those books. I’m glad to have them and share with everybody. Somebody needs to take care of them.”

Juniper Creek Outdoors is located at 419 N. Grand Canyon Blvd. in Williams. It is open seven days a week from 7 a.m. to 7 p.m.