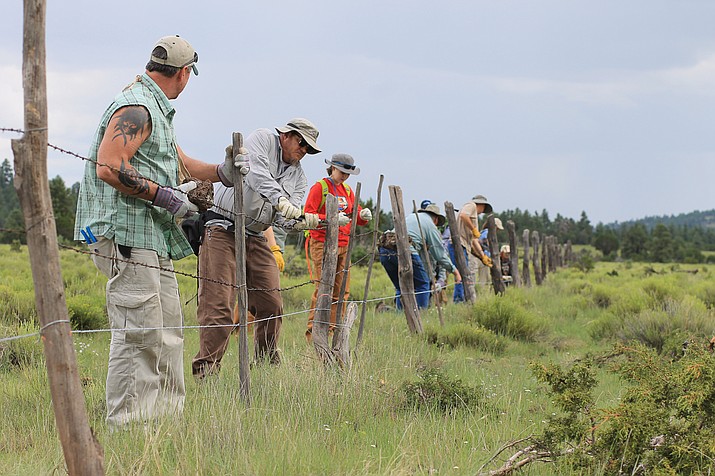 Volunteers and wildlife managers modify fences in Spring Valley Aug. 12. Workers moved the bottom wire up 18-20 inches to allow pronghorn to pass under the fences. 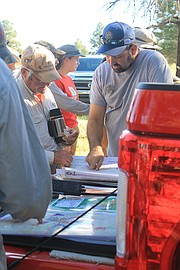 Pronghorn are the fastest land mammals in North America, but put a fence in front of them and they come to a screeching halt.

In Arizona, the checkerboard pattern of range fences have become a problem for the free range pronghorn who historically migrated across the state.

“One of the problems we’re having not only in Arizona, but nationwide, is habitat connectivity,” said Jeff Gagnon, a research biologist with the Arizona Game and Fish Department (AZGFD).

Fortunately several stakeholders interested in the conservation of pronghorn in Arizona are working together to change the fate of the animal.

On Aug. 12, volunteers with the Arizona Antelope Foundation partnered with officials from AZGFD, Arizona Department of Transportation, Kaibab National Forest and Coconino National Forest to reconfigure rangeland fences in the Spring Valley area to be more pronghorn friendly.

“If we move the bottom wire up 18 to 20 inches above the ground, they’ll go under,” Gagnon said.

Gagnon and other researchers have found that pronghorn avoid jumping over fences or crawling through fences, but will crouch down and go under fences.

Researchers have been studying the pronghorn in northern Arizona and adjusting fences over the past 10 years to facilitate movement of the animals across habitats. Researchers have found that fences, along with roads, often become impermeable barriers to pronghorn migration and confine the animals to certain areas.

“It’s a pretty big problem here and worldwide,” Gagnon said. “Population growth in Arizona is supposed to grow a lot over the next few decades and it is having a pretty negative effect on wildlife. Three or four of the largest roads in the United States go right through Arizona.”

Historically, pronghorn once numbered in the millions across North America. They were found in open grasslands from the Mississippi River to the Rocky Mountains and from central Canada to Mexico. As people began migrating west, the pronghorn nearly went extinct.

Historians believe pronghorn were most likely the most common game animal in Arizona prior to the 1890s. Because of overhunting and lack of quality game management, the population of pronghorn in 1921 dropped to 11,750 in the United States and Canada, and just 650 in Arizona.

Concerned conservationist worked to stop the decline and the Arizona Game Protective Agency was formed to enforce state game laws. By 1941, the population in Arizona had grown to several thousand. Today the population is estimated at 10,000 – 15,000 with the greatest threat being encroachment and habitat fragmentation.

To definitively support their theories about pronghorn migration barriers, researchers began capturing and pronghorn and fitting them with global positioning system collars in 1990 to monitor the movement of the animals. The researchers then created maps with colored lines representing each animal and studied the patterns.

“We began collaring animals and seeing what we could do to help them,” Gagnon said. “We’ll catch them with a helicopter, put a collar on them and send them on their way.”

Gagnon said the collars relay the pronghorn’s location every few hours and show the researchers where they are roaming.

In 2007, biologists captured 37 pronghorn and outfitted them with GPS equipped radio collars and then released them.

AZGFD, the Forest Service, the National Park Service and volunteers modified fences to have a 16 inch bottom strand and installed goat bars (a PVC pipe that pulls the bottom and middle strands together to create a passageway) on targeted fences. Volunteers also moved some fences back 100 to 400 meters from the highway to allow more area to “stage” before attempting to cross the road.

In 2010, 17 more animals were collared and monitored. Researchers found that the 17 collared pronghorn crossed no-fence lines twice as often as actual fences, proving that fences were indeed a barrier to their movements.

Researchers also found a higher proportion of pronghorn crossing in fence sections with a bottom wire height of 16 inches or higher. They also crossed more at fences set 200-400 meters from the road and areas where the fence was removed completely. 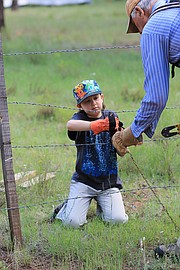 In 2012, research biologist Scott Sprague studied DNA samples from 132 pronghorn living on opposite sides of Highway 89 and State Route 64. According to his research, the two highways limited the herds from interacting and actually acted as barriers to gene flow.

“He looked at animals that were captured as well as hunter harvested animals and found there were genetically different populations on either side of the road,” Gagnon said.

Gagnon said the road and the fences kept the animals apart, which leads to a lack of genetic variation and increases the animals’ susceptibility to disease and climate change.

“It’s kind of like inbreeding in a way,” Gagnon said. “Being able to connect those populations is important so they can succeed.”

Antelope have exceptional eyesight, often compared to high-powered binoculars, and are one of the fastest animals, being able to run in excess of 60 miles-per-hour. They prefer open grasslands where the can more easily watch for predators.

“Pronghorn are grassland species,” said retired AZGFD biologist Richard Ockenfels. “If you’re going to run at 60 mph, it better be pretty open. Pronghorn like to see things a long way away.”

Gagnon said the thick forests in northern Arizona have also contributed to loss of habitat for pronghorn. He said forest managers are considering the wildlife that are impacted by overgrown forests in their decisions for thinning with projects such as the Four-Forest Restorative Initiative (4FRI).

Gagnon said the data collected from the collared pronghorn is not only being used by wildlife managers, but also rangeland managers and foresters who are engaged with 4FRI.

According to Gagnon, several ranches, nonprofit organizations, state and federal entities and other volunteers have contributed over $800,000 to capture and collar pronghorn and modify fences in Arizona.

Gagnon hopes to use data from the projects on highway 89, Spring Valley and State Route 64 for future projects south of I-40.

Biologists say pronghorn travel from Camp Navajo to Jerome and Clarkdale. Researchers believe historically the animals migrated from the Grand Canyon to the area, but I-40 has created a barrier to that migratory route.

“If we are able to connect the populations across I-40, the animals could move from the Grand Canyon to Jerome,” Gagnon said. “That’s a large scale connectivity. That’s the big picture.”