Can't see the solar eclipse? Tune in online here, on TV or make a pinhole camera 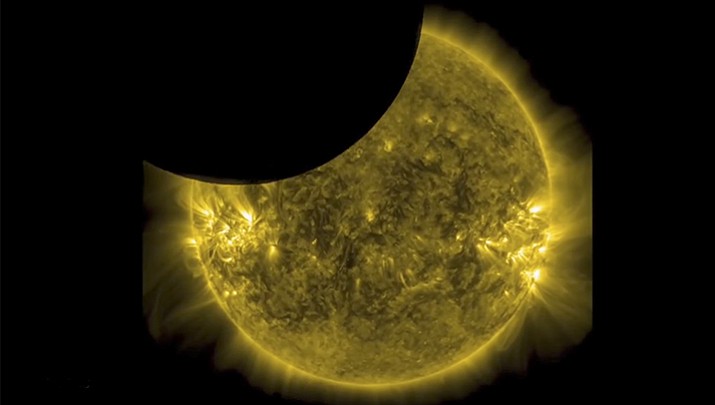 A solar eclipse on Monday, Aug. 21, 2017, is set to star in several special broadcasts on TV and online. PBS, ABC, NBC, NASA Television and the Science Channel are among the outlets planning extended coverage of the first solar eclipse visible across the United States in 99 years. (March 2016 NASA File photo)

For most of Arizona, it will take about two and a half hours from the beginning of the solar eclipse on Monday, Aug. 21 to the end. In the Williams-Grand Canyon area, the eclipse will begin at 9:13 a.m. Arizona is not in what is known as the "path of totality," meaning the sun will only appear partially obstructed.

For those not in the 14 states comprising the eclipse's path of totality, here's a look at some of the viewing opportunities online and on TV:

— "Eclipse of the Century": In partnership with Volvo, CNN plans two hours of livestreaming, 360-degree coverage accessible in virtual reality through Oculus and other VR headsets beginning at 1 p.m. EDT. Accompanying television coverage will include reporting from Oregon, Missouri, Tennessee and South Carolina.

— "Eclipse Over America": The PBS science series NOVA is planning a quick turnaround on its eclipse documentary premiering Monday. Senior executive producer Paula S. Apsell said "Eclipse Over America," which delves into why eclipses occur and what scientists can learn from them, will incorporate images of the event from across the country shot earlier that day with Dantowitz's high-tech cameras.

— "Great American Eclipse": The Science Channel will broadcast its live coverage from Madras, Oregon, from noon to 4 p.m. EDT, with commentary from educators and astronomers from the Lowell Observatory.

— "The Great American Eclipse": David Muir will anchor ABC's two hours of live coverage, with correspondents reporting from viewing parties across the country. NBC also plans live coverage, with Lester Holt hosting special reports at 1 and 2 p.m. EDT featuring correspondents reporting from Oregon, Illinois, Wyoming and South Carolina. Shepard Smith will break into typical broadcasting on Fox News Channel from noon to 4 p.m. EDT to update viewers on the eclipse and introduce footage from NASA and observatories around the country.

— "Solar Eclipse: Through the Eyes of NASA": NASA will offer hours of coverage online and on NASA Television beginning at noon Eastern. It plans livestreaming of the eclipse beginning at 1 p.m. EDT with images from satellites, research aircraft, high-altitude balloons and specially modified telescopes.

— "The Total Solar Eclipse": The Weather Channel is kicking off its live coverage at 6 a.m. EDT and continuing throughout the day with dispatches from seven locations along the "path of totality."

Or make your own pinhole camera

With just a few simple materials – two pieces of white card stock, a piece of aluminum foil scotch tape and a pin or a paper clip – you can make a pinhole camera that will project the sun's image. NASA's Jet Propulsion Laboratory has step-by-step instructions here.