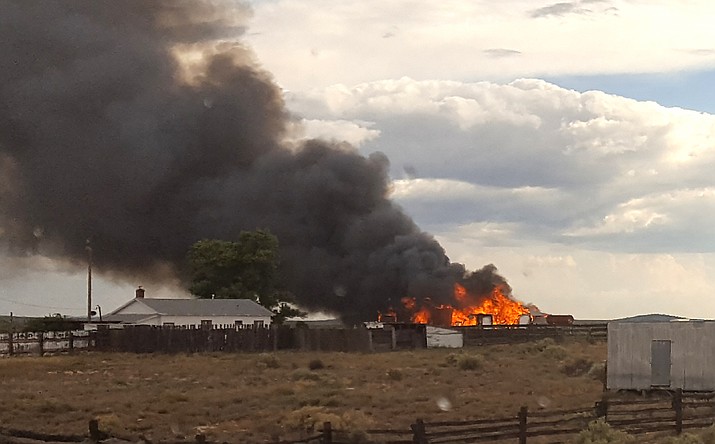 A fire rages at an unidentified residence north of Williams in July. Many rural residences lie outside designated fire districts in northern Arizona.

An early July monsoon rolls through the pinon-juniper, bringing pops of lightning on the hillsides. The grass and shrubs are dry from a month of above average temperatures. Suddenly, smoke is seen rising from an outbuilding at the rural residence where the owners live off-the-grid and outside a fire district.

Should the owners call 911?

This is the dilemma for home owners and land owners in rural Arizona, where fire coverage is determined by fire districts and not the county.

But not every locale has a fire district.

In rural Williams, there are five fire districts — Junipine, Sherwood Forest, Ponderosa, Tusayan and Kaibab West — and property owners inside those districts pay taxes for fire coverage. Between those districts lie hundreds of miles of private property that is outside any district.

So, who fights those fires?

One organization that is not a fire district, yet still responds to calls is High Country Fire and Rescue.

High Country is a non-profit department located near Red Lake. The department pushed but failed to become a district two years ago. However, the department provides all the fire services of a fire district but does so with donations instead of tax dollars.

“We responded to 253 calls last year on a $30,000 per year budget,” said High Country Fire and Rescue Chief Robert Trotter.

High Country covers approximately 300 square miles between Williams and Valle, including Highway 64 and parts of Highway 180.

Although having a much smaller coverage area, Junipine and Sherwood Forest districts assist with some of these calls.

“We both respond outside our districts,” said Sherwood Forest Fire Chief Wayne Marx. “Although we can’t take everybody out of our district. If we left our area uncovered, that would be on us.”

Since High Country is not a fire district, it functions with donations and subscription fees from residents in its call area.

High Country urges residents to pay a $200 dona-tion for coverage, although the department will respond to any call whether a resident has paid or not.

However, for those who have not donated, there is the possibility they will be charged for any fire response.

“We will respond either way, but we give them this card,” Trotter said. “If they haven’t paid we will bill them the nationwide rate of $1,500 per hour.”

Trotter said residents have the right to turn down fire fighters if they show up at their home to fight a fire.

“But no one ever has,” Trotter said.

Trotter said the department is committed to providing coverage for their area and attempts to help those outside their area, but even so there are areas that are left on their own.

“We have to draw the line some place,” Trotter said.

High Country has attempted to become a fire district, but it is a difficult process, said Trotter.

“You would think you could just a have a special election and tell people the pros and cons, but that’s not how it works,” Trotter said.

According to Coconino County, a department must submit an impact statement to the County Board of Supervisors and then a hearing date is set. If approved, the district organizers must circulate petitions. Petitioners have one year from the approval date to collect the minimum number of signatures.

“You have to have 50 percent plus one,” Trotter said. “So I have to have 901 signatures to say yes they want a fire district. Plus I have to have over 50 percet of the value of the property in the area.”

Trotter said the problem is that several of the properties in the area are large and have no interest in supporting a district.

“Some of these land owners live outside the country and have no structures on the property,” Trotter said. “So they aren’t concerned about coverage although it affects the rest of the homes in the area. It would only raise their taxes by $15 per lot.”

High Country Fire responses in 2016 included 175 EMS calls and 41 fire calls. Many of those calls were accidents on Highway 64.

Besides firefighting, High Country has a fully equipped ambulance and several certified EMTs. They are often the first responders to accidents on Highway 64 and in the Red Lake area. They offer support for Guardian and Lifeline ambulances stationed in Williams and Tusayan

“They have only three ambulances for 800 square miles,” Trotter said. “Lifeline has two in Williams and there is one ambulance from Guardian in Tusayan.”

Trotter said it is not unusual for all three ambulances to be called out at the same time.

“If Lifeline gets a call in Seligman, you’re down to one ambulance and they start moving another one up from Prescott,” he said. “If the other ambulance gets called out, you are looking at an hour response for a paramedic.”

Trotter said that in this situation, High Country Fire can be an asset.

“That’s why we have a lot of EMTs and medical direction from Kingman (Hospital),” he said. “We start IVs, we give certain drugs, and we can have you to a hospital in 35 minutes for definitive care.”

EMS coverage for rural Arizona is different than fire coverage. Arizona uses a Certificate of Necessity (CON) system to regulate ground ambulance service to make sure that every place in the state has adequate emergency medical services, including rural areas.

“If someone is hurt out there in no-man’s land, the CONs that Lifeline and Guardian have require them to go,” Trotter said. “The state mandates that they have to be there in a certain amount of time.”

“But fire departments are not under the same mandates,” Trotter said. “If Junipine doesn’t have anybody on call one day and there’s a call for a fire, they aren’t mandated to go. Same thing with Sherwood and same thing with us.”

The founders of High Country Fire were originally volunteers for Junipine Fire Department, which had been providing some fire coverage for those who lived outside their district. When Junipine decided to scale back and only handle calls within their district, those volunteers left to form their own department.

Initially, High Country Fire had one truck and a rescue vehicle that was kept at the volunteers’ homes in Red Lake. In 2013, NextEra’s Perrin Ranch Wind farm donated $500,000 to High Country for construction of a fire station to serve the rural areas along Highway 64.

The department receives no tax monies and is dependent on donations and subscription fees to fund their $30,000 per year budget.

Junipine and Sherwood Forest became fire districts in the late 1980s. Marx said the process was difficult and still requires a lot from the department to remain a district.

“There are a lot of hoops,” Marx said. “We have to file a lot of paperwork and there is training and other requirements.”

Several fire departments have joined with state and federal fire fighters to create a multi-agency approach to emergency incidents.

WFAB is working to make the fire districts more cohesive. Their most recent push was to create a region wide communication system which includes installing a new repeater on Bill Williams Mountain.

Northern Arizona Fire Authority (NAFA) is another group that several of the local fire departments are putting together. NAFA is looking to centralize the administrations and share their needs to help with efficiency.

One area of concern is communication. Marx, Trotter and Junipine Fire Chief J.W. Dyer all said communication is one of the most difficult problems with rural fire response.

“I think most of the departments and districts work very well together,” Marx said. “But the communication pipeline gets messed up.”

Trotter and Marx said dispatches for the departments have gotten delayed by up to 15 minutes because of problems routing the calls.

“Not only can there be a delay,” he said. “But it’s like the old party game where you whisper in someone’s ear, you end up not knowing what you are responding to.”

The departments all agree that is an area they are working on and hope to improve the communication between dispatch centers.