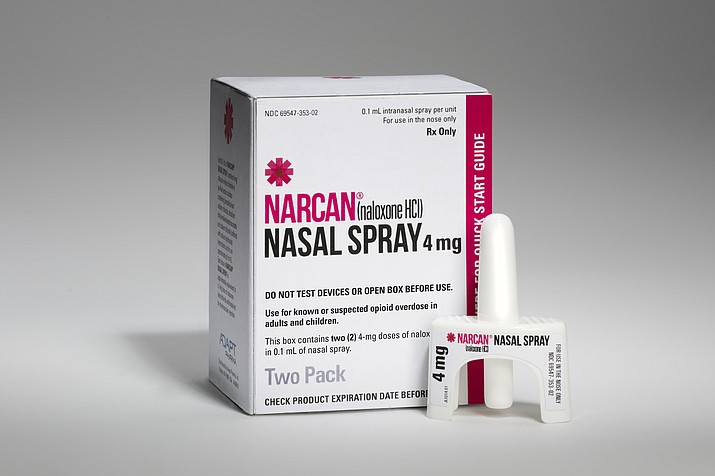 Naloxone hydrochloride, sold under the brand name Narcan, can reverse the effects of an opioid overdose when sprayed into the nostrils.

TUSAYAN, Ariz. — As opioid use in the United States continues to rise exponentially, rural police and fire departments are faced with the reality that an epidemic in a “couldn’t happen here” scenario is indeed knocking at their doorsteps.

President Donald Trump declared the opioid crisis gripping the country a national emergency Aug. 10, which Arizona Governor Doug Ducey declared back in June. Although Arizona hasn’t been at the forefront of the crisis like Ohio, the Arizona Department of Health and Services (ADHS) revealed that 790 Arizonans died of opioid overdoses in 2016 — a number that climbed nearly 75 percent over the past four years.

“As the number of opioid overdoses and deaths increase at an alarming rate, we must take action. It’s time to call this what it is — an emergency,” Ducey said. “I’m declaring a statewide health emergency because we need to know more about the epidemic, including enhanced data that illustrates when and where these overdoses occur so that we can develop real, targeted solutions.”

Both Ducey’s and Trump’s declarations frees up funding to deal with the crisis. While the president’s declaration provides a pathway for states to receive federal disaster relief funding to deal with the escalating crisis, Ducey’s order gives Arizona the ability to coordinate public health efforts between state, local and private-sector partners and allows the state to utilize all of its public health resources, including the distribution of naloxone, a drug that can reverse the effects of a drug overdose. It also creates a provision for enhanced reporting by the ADHS to better understand where and how often opioid overdoses are happening statewide.

According to real-time statistics available from ADHS, there have been 201 suspected opioid overdose deaths as of Aug. 14, with 1,557 suspected overdoses.

What does that mean for small communities like Tusayan and Grand Canyon?

For some, it means increased awareness of the dangers of some prescription drugs like oxycodone or fentanyl — powerful narcotic painkillers — and the closely-related heroin. Last year, up to four suspected deaths occurred in Coconino County in the vicinity of Grand Canyon National Park.

For others, like emergency medical technicians at Tusayan’s fire department and Coconino County deputies, it means additional training in identifying overdoses and the administration of naloxone. Tusayan Fire Chief Greg Brush said the department is looking at additional training to better equip EMS staff to deal with any emergencies that might arise in its jurisdiction.

The use of naloxone, distributed under the brand name Narcan, has been controversial in some areas. The reservations, they say, come from the drug’s costs, as well as the perception that individuals can engage in as much risky behavior as they want.

Richard Jones, sheriff of Ohio’s hard-hit Butler County, said in an interview with NBC he refuses to equip his deputies with naloxone because the cost of using the drug to revive repeat drug offenders is a financial burden to county taxpayers. One dose of Narcan costs $37.50, and sometimes multiple doses are required to revive a person.

“All we’re doing is reviving them, we’re not curing them,” Jones told NBC News. “One person we know has been revived 20 separate times.”

It also puts the deputies at risk, he said, because those who overdose can turn violent once they are revived and realize that police are involved. Jones said he feels paramedics are better equipped to administer the drug.

There has also been some debate about whether school health offices should stock naloxone, with supporters arguing that it will save lives. Opponents, while admitting that it can save lives, have said supplying the drug will indicate to students that they can use drugs on school grounds free of consequences.

Debbie Walsh, the lone negative vote on the Akron, Ohio School Board, said that while cost has been cited as a concern, her bigger concern is the impact on students themselves.

“Having it on hand might be creating an even bigger problem by sending the message to kids: ‘Don’t worry, take drugs. We’ve got Narcan to save you,’” Walsh said. “I am for protecting our students, and I agree that Narcan is a lifesaver. But I think it can also become a crutch.”