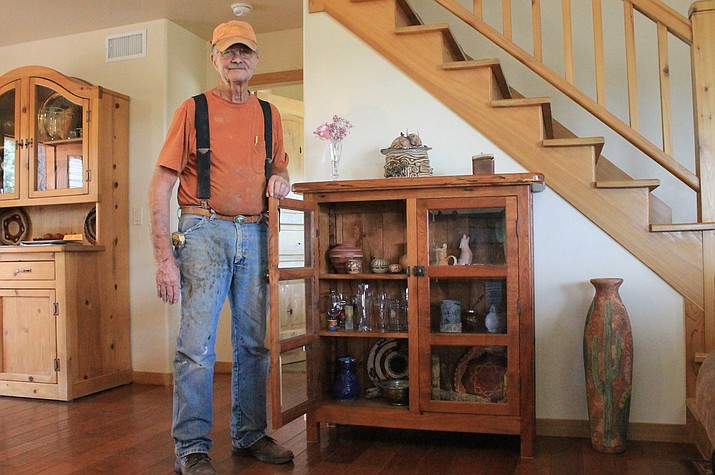 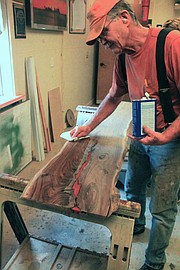 Butch Corrington has always known lumber. As the manager of several lumber yards for over thirty years, Corrington was exposed to all kinds of wood and developed an appreciation for the variations in each type.

Corrington is now known around Williams for his intricately designed mesquite and walnut furniture. Each table, cabinet, bed frame, shelf or other design reflects Corrington’s love and appreciation for the woods he came to know while managing lumber yards in Texas and California.

In Corrington’s early days of woodworking, his handcrafted furniture was made with mostly pine, oak and poplar. Corrington and his wife, Donna, moved to Williams seven years ago after Corrington retired from the lumber business. His first mesquite project was a blanket chest he saw in a woodworking magazine.

Many of items Butch Corrington makes have traditional joinery.

He decided to work on this project and was introduced to a cowboy/preacher in Wickenburg who cut and milled mesquite wood into slabs of rough lumber. However, after several hours of sorting through all the stacks of lumber, Corrington began to feel uncertain as to whether mesquite was the wood of choice. All Corrington could see were knots, splits and blemishes. But, Corrington decided to give it a try, and was surprised as those imperfections added character to the chest.

Since then, Corrington has mostly worked with mesquite with occasional pieces made of walnut or other wood. Currently, he is working on a coffee table made of black walnut with red coral inlay.

Corrington uses traditional joinery such as mortise and tenon, box and dovetail to add distinction to the framework of his furniture. Each piece is unique and he works to make his pieces tight, smooth and precise.

A lamp made by Butch Corrington.

Corrington lived in California and Texas most of his life, but was born and raised in Iowa.

“I was like every boy who grows up in the Midwest, with dreams of either going to the beach or the mountains,” he said. “I’ve been to both.”

When he was 21 he left Iowa to work at Lockheed in California where he worked with Donna’s father and cousin, who introduced him to her. Corrington made aircraft parts and said Lockheed was where he learned to use machine tools.

“Lockheed did a lot of the training in those days,” he said. “I went in on an apprentice program, and within two years was at the top of the machine shop.”

The Corringtons married in California, and eventually headed back to Iowa where they set up a farm.

“I enjoyed farming,” Donna said. “It was a better life for the kids, so much better than the city.”

“I began doing a little wood working then” Corrington said. “I have a piece from 30 years ago.”

Once Corrington retired, he began to study books and videos about wood working.

“I’m pretty much self-taught,” he said. “I spend most of my time doing that.”

In his wood working shop in the garage of his home, Corrington works on custom projects one at a time.

“I’m not in it for the money,” Corrington said. “I just want to make enough money to start my next project.”

Corrington said he likes the uniqueness of mesquite and typically uses an oil-based clear finish that makes the wood have a warm honey tone with red highlights that darken with age.

He uses three common species of mesquite — honey, screwbean and velvet. Velvet is the largest of the mesquites species and grows at elevations below 4,000 feet in desert washes and grasslands.

Corrington said velvet mesquite is a very hard wood that makes exotic material for furniture. He said the wood requires a lot of work to stabilize, but said it is worth the effort for the beautiful results that emerge.

Corrington’s furniture can be found at The Mountain Home Gallery on Route 66 in Williams and many art venues in Prescott. Anyone who is interested in custom project can contact him at (928) 266-5033 or by email at corrington@ymail.com. He also has a website — www.mesquitecustom.com