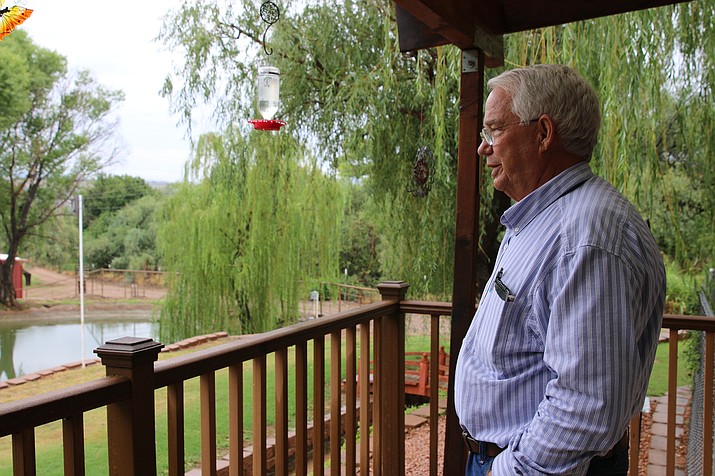 Mike Noble stands on his back porch, overlooking the designated area for RVs bordering his ranch. Noble is concerned about the location of the ranch and the road access.

Arizona State Parks and Trails purchased Rockin’ River Ranch from the Nature Conservancy in 2008. Nearly a decade later, a $4 million budget appropriation is spurring plans to renovate the park and open it to visitors next year.

“The idea was to develop a park that would be accessible and affordable for citizens,” Walter “Skip” Varney, deputy director for Arizona State Parks and Trails, said at an open house in July.

Plans for the 208-acre park include cabins, campgrounds for RVs and tents, a boardwalk along the river and old buildings turned into a store and bed and breakfast. Visitors could ride horses, kayak or canoe down the Verde River and walk along trails when the park opens in December 2018.

But landowners whose property borders the state park worry visitors will clog the only road and cram into parking facilities, leading to serious safety issues for visitors and locals. One rancher resigned in protest from an advisory group of state parks representatives, the local community and the Nature Conservancy.

Park sits too close to home

Ranchers in the area have started a Facebook page to air thoughts about the plans for the park, added to Arizona’s stock of 35 state parks that include Slide Rock and Picacho Peak.

Mike Noble, one of seven ranchers whose property borders the Rockin’ River park, lives behind the designated area for RVs. He’s concerned park travelers will enter his property and disturb his Texas Longhorns.

His cattle are calm around familiar faces but could attack when they feel threatened, Noble said.

“If you look at the land, they have plenty of space to put the RV park,” Noble said. “Why put it right against the private landowners?”

Wayne Colebrank, project manager for Logan Simpson, an environmental consulting group in Phoenix that worked with the state to develop the site, said putting facilities closer to the river increases the risk of flooding.

Varney also said people have a multitude of different interests that the state park team is trying to balance. Some people want RVs. Some want horses. State officials considered adding tubing before rejecting the idea.

Locals packed the July open house, sharing concerns about the impact of visitors and various layouts. One plan called for as few as 20 spaces for RVs, compared to 50 spaces in another plan.

Nearly 60 people listened to the July presentation, compared to about 100 who attended a June open house. Those who commented on the plan focused on what state officials should limit, including access to the park.

One road leads to homeowner worries

Mike Noble and other landowners said Salt Mine Road, an old dirt road that was recently paved, is the only route into Rockin’ River Ranch and nearby homes.

Noble said drivers have no place to pull over or easily turn around in case of an emergency on the winding, two-lane road.

Noble said with heavy traffic on Friday into the park and Sunday evenings as visitors head home, residents would have no way to get to their property if a car or RV broke down on the road.

Steve Ayers, Camp Verde’s economic development director, said at the July open house there are no plans to upgrade Salt Mine Road until the park opens.

“We have people out there with health issues,” Noble said.

Noble and other Salt Mine Road residents created the Facebook group, Protect.SaltMine.Road, where the community can share their concerns on Salt Mine Road construction and the Rockin' River Ranch proposals.

The Facebook group of about 40 includes the ranchers whose land borders the proposed park and other nearby landowners.

Brent Hallock, who represented the Salt Mine Road community on the technical advisory committee for Rockin’ River Ranch, resigned from the committee in protest the day after the July 17 open house.

“I think their priorities are to get it open, get it open, and get it open,” Hallock says in a Facebook post that also touched on communication with park officials, archeology on the ranch, and health concerns.

“I agree that it needs to be open to the public as soon as possible,” Hallock wrote.“But not at the expense of safety and negative impact on the Salt Mine Road community.”

Varney, of Arizona State Parks and Trails, said state officials encourage the public to air concerns at the open houses. They can mail or email their thoughts, including a preference for the three concepts, he said.

The agency also plans to conduct another open house Aug. 16 at Camp Verde Middle School Cafeteria, with the time to be determined.

Varney says the state parks development team and the consulting firm will collect the feedback and weave it into a master plan.“We want to make sure, whether it be through public presentations or information gathering analysis, that we have all the information available and try to develop the best park that we can for the citizens,” Varney said.

“I’ve developed 17 parks, and it’s very exciting,” Varney said. “It’s very sensitive and you’ve got to be real careful as you go through the process.”