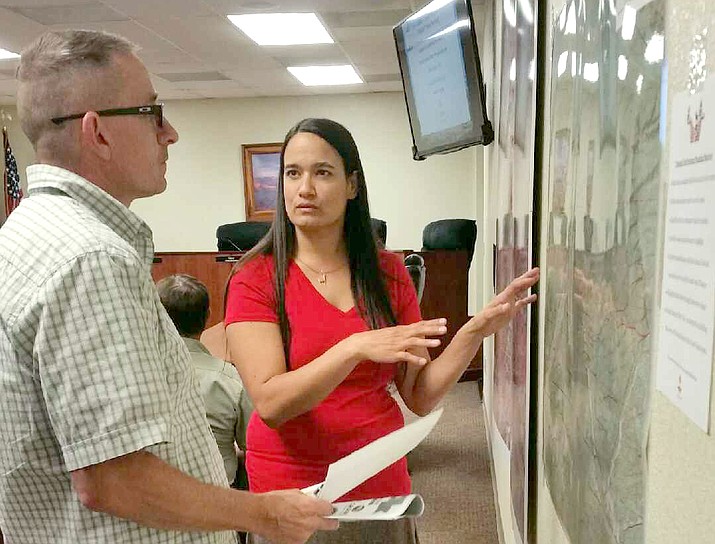 TUSAYAN, Ariz. — As part of its planning process, the town of Tusayan held a public meeting Aug. 3 to gather input from residents on a proposed master plan for a municipal trail system through the town.

Sirena Dufault, a consultant with TrailsInspire, gave a presentation on the objectives and goals of the trail system master plan, as well as the results of surveys provided by residents and visitors prior to the meeting.

Dufault said one of the main objectives of the trail system is to provide safe and sustainable local trails for both residents and visitors.

“After speaking to a number of locals, they’re really not comfortable sending visitors off into the forest,” Dufault said. “The trails aren’t always properly marked.”

Another issue Dufault hopes to address through the trail system is a way for residents to safely commute to and from work, since many don’t have vehicles. She also said every effort will be made to keep the trails off private property, citing past concerns.

“Nobody wants to see a lot of people walking right past their bedroom,” she said. “So we’re trying to identify corridors where we can move people safely, instead of the existing spider web of social trails.”

The plan will also identify areas of natural beauty, provide recreational trails for mountain biking, provide trails of varying difficulty for all experience levels, bring in more traffic from the nearby Arizona Trail and explore the human history of the Grand Canyon area.

Default also discussed the results of a survey that was made available to visitors and residents through Aug. 1. Out of the responses Dufault received, about 76 percent were local residents, with the remaining 24 percent being visitors.

The effort to devise a master trail plan for the town is on its second attempt. Dufault said the first plan was scrapped, since the plan called for trails that crossed private property without properly consulting any property owners.

“The previous planner drew a bunch of lines on a map, and when I took that plan to the property owners, they were all asking me ‘Why do these lines go across my property?’” she said. “So we’re starting over, and we’ve already had a dialogue with property owners as part of the planning process.”

Those who weren’t able to attend the meeting and want to provide input on the developing trail master plan, can submit ideas via email at tusayantrails@gmail.com.