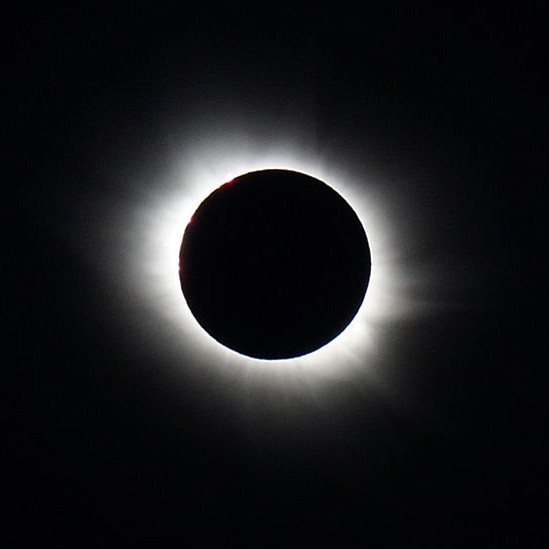 The Great American solar eclipse is set to occur Aug. 21.

Diagram of a solar eclipse.

Solar eclipses are unique celestial events that take place when the sun, moon and Earth are in syzygy, which is when all three bodies lie in a direct line in space.

This can only occur at the time of a new moon, when the moon lies between the sun and Earth, so that the lunar shadow is cast on the Earth. Anyone under the thin Umbra Shadow will observe a total eclipse. Those within the penumbra shadow will view only partial phases. Solar eclipses only occur between two and four times each year because of the angle of the plane of the moon’s orbit around Earth differing from Earth’s orbit around the sun. Since the path of the shadow appears at varying locations on Earth, people usually have to travel to distant locations to observe totality. A total solar eclipse is unique in our solar system since no other planets, except Earth, have eclipses where the apparent size of the sun and the planet’s moon appear of equal size.

Historically, solar eclipses were interpreted by early cultures as portents of doom, or bad omens. Hence predictions of such events by astrologers were considered important. But, being the court astrologer was not necessarily a safe job. About 4,000 years ago, Zhong Kang (reigned 2088-2075 BCE), the fourth king of the Xia Dynasty, beheaded two of his astrologers for failing to predict an eclipse, which had resulted in confusion and panic among the common people. The near total solar eclipse of Aug. 8, 1496, visible from what today is Mexico City, is depicted in Aztec writings and occurred the same year that Emperor Tlacaelel died. This was seen as the foretelling of the coming of Quetzalcoatl, the fair-skinned, bearded, and feathered serpent god who was to one day return from the east. A few years later, when Emperor Montezuma heard about the fair-skinned, bearded individuals arriving in Mexico from the Caribbean, he believed Cortez to be Quetzalcoatl. Through this ruse, Cortez was able to take advantage of Montezuma’s mistake to eventually overthrow the Aztecs. Even today, certain Native American groups will not observe solar eclipses because to them the sun and moon are brother and sister. Hence their coming together infers incest.

Solar eclipses have also made it into fiction. In Mark Twain’s 1889 novel, “A Connecticut Yankee in King Arthur’s Court,” the protagonist, Hank Morgan, a 19th-century resident of Hartford, Connecticut, finds himself transported back some 13 centuries to medieval England. When confronted with an angry mob he conveniently remembers that on June 21, 528, at 12:03 p.m., a total solar eclipse will take place, which allows him to frighten the people and escape.

Because dates, times and locations of early eclipses can now be accurately determined, mention of both solar and lunar eclipses in ancient documents have become valuable resources for historians enabling them to pin-point various historical events. Scientifically, a total solar eclipse provides a rare opportunity to observe the sun’s corona, or outer atmospheric layer, as well as other solar atmospheric features, which are normally not visible because they are much dimmer against the sun’s overall glare. The element Helium (named for Helios the Greek god of the sun) was discovered during the total solar eclipse of Aug. 18, 1868, long before it was found on Earth. The observation of the total solar eclipse of May 29, 1919, helped to confirm Einstein’s theory of general relativity. By comparing the apparent distance between stars in the constellation Taurus, from photographs taken six months apart (with and without the sun between them) the attraction of the sun’s gravity on light photons from stars was confirmed. This observation of the sun between the stars was only possible during a total eclipse, the only time stars are visible in the day time.

The year’s solar eclipse om Aug. 21, is being heralded as the great American eclipse because it only passes over the United States. The last time it did so was in 1918. The path of totality begins in the North Pacific, passes through northern Oregon, central Idaho, over Wyoming, across Nebraska, and through Missouri, Kentucky, Tennessee and South Carolina, finally passing into the North Atlantic.

Viewing the sun during the partial eclipse phases requires special eye protection or indirect viewing methods to protect the eye from being severely damaged. The sun’s disk can be viewed using appropriate filtration to block the harmful part of the sun’s radiation. Note: sunglasses and exposed photographic film are not adequate protection. Only properly designed and certified solar filters should be used for direct viewing of the sun’s disk. The safest way to view the sun’s partial phases can also be done by projecting the image of the sun onto a white piece of paper using a pair of binoculars, a telescope, or a piece of cardboard with a small hole in it (often called a pinhole camera). However, care must be taken to ensure that no one looks at the sun directly. A large white piece of cardboard or sheet placed on the ground under a deciduous tree will also make apparent the multiple projected pinhole solar crescents, as the light passes between the leaves, during the eclipse.

August 21 – the Partial eclipse observation Mountain Standard Times for Williams are below. For Flagstaff times, add one minute.