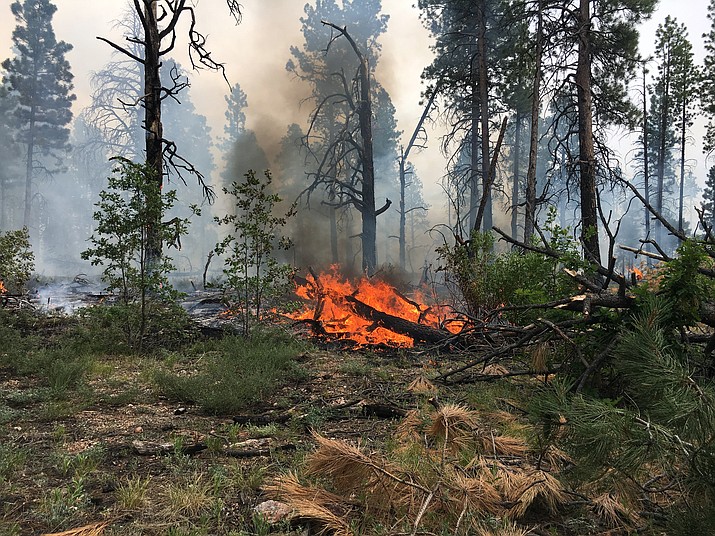 The Pine Hollow Fire on the North Kaibab National Forest was ignited by lightning during monsoon storms July 19. The fire has burned around 500 acres so far.

NORTH RIM, Ariz. — After receiving significant moisture from monsoon rainfall over the past few days, the Pine Hollow wildfire has seen no growth in the last 24 hours.

However, as the weekend approaches, a drying trend is forecasted for the Kaibab Plateau, leading fire managers to anticipate increased smoke activity and sightings.

Last week, firefighters observed an increased in backing and flanking fire behavior along ridgelines. Incident commander Paul Lemmon said this kind of activity indicates the fire is more intense on the ground and less so in the canopy, where the fire may burn hotter and spread more easily.

The Pine Hollow Fire has burned around 1,600 acres so far.

According to Kaibab National Forest spokesman David Hercher, all natural ignitions are evaluated for opportunities to bring resiliency back to the landscape and restore fire-adapted ecosystems throughout the forest. Hercher said fire managers take into consideration many factors when determining what actions to take on a wildfire. Firefighter and public safety is always number one, but other factors include: location, fuels, terrain, current and expected weather conditions, current and expected fire behavior, potential fire spread and smoke impacts.

“The healthier the landscape is here on the Kaibab, the more likely it is to resist insects, disease and high mortality from drought conditions and increase the forest’s survivability when a high-severity wildfire does occur,” said North Kaibab District Ranger Randall Walker.