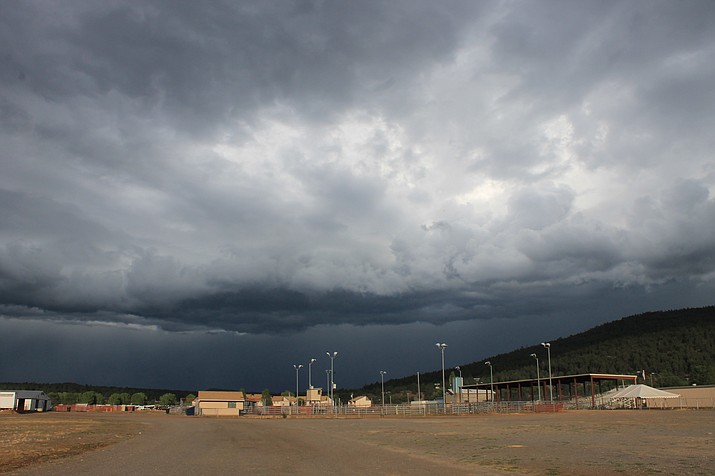 A monsoon storm rolls into Williams mid July. Rain totals for July were above average for most of northern Arizona.

After an unseasonably hot June, monsoon season rolled in with a bang in July.

According to the National Weather Service, most locations in northern Arizona received well above average rainfall for the month, with some locations even doubling the July average.

While this week’s forecast calls for blue skies, monsoon moisture is still predicted for most afternoons.

In July, Prescott topped the field for the most moisture in northern Arizona with 6.18 inches, a 228 percent increase over normal. Prescott recorded the fifth wettest July on record. Bellemont followed with 4.65 inches and Flagstaff with 4.48. Flagstaff was 1.3 inches above average making it the 15th wettest July in history.

Two major flash floods swept through the northern Arizona in July. One occurred near Mayer following the June Goodwin Fire, and the other along Ellison Creek northeast of Payson.

According to the weather service, on July 19, an extremely heavy rain fell over the Goodwin Fire scar and surrounding areas, which produced a large flash flood and debris flow that swept down Big Bug and Grapevine Creeks through the towns of Mayer and Spring Valley. Over two inches of rain was recorded between 4:20 and 5:10 p.m. that day. It is estimated 110 homes near the creek were damaged.

On July 15, a large debris flow and flash flood swept through the Ellison Creek drainage north of Payson. There were 10 fatalities and several injuries to swimmers at the Cold Springs swimming hole in the creek. The weather service estimated that up to two inches of rain fell over the Highline Fire Scar and Ellison Creek draining between 1:15 and 2:15 p.m. that day.