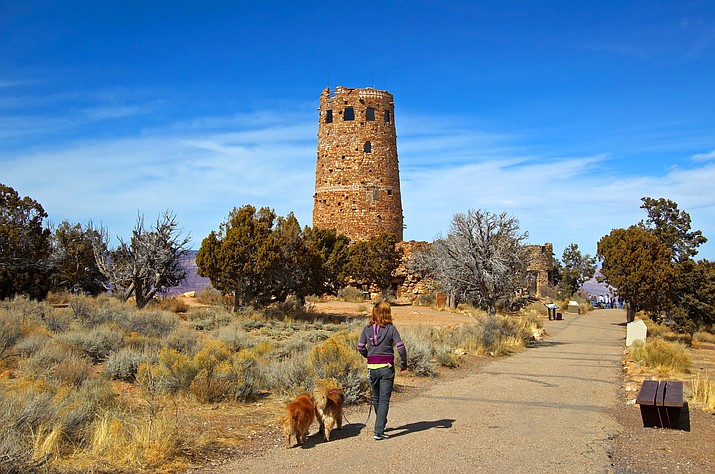 Visitors can explore with their pets at Desert View and other areas on the South Rim of the Grand Canyon.

PHOENIX — Tourists visiting Arizona spent a record $21.2 billion in the state last year — and they would have spent more if gasoline had been more expensive.

That’s the conclusion of a new study done for the Arizona Office of Tourism.

The report also finds that the lion’s share of international visitors to the state continue to come from from Mexico, although tourism from that country actually declined in 2016 by one-half a percent versus 2015. The number of Canadian tourists also dipped slightly, with the nearly 880,000 visitors down by more than five percent.

But Debbie Johnson, the agency’s executive director, says that has nothing to do with Arizona being less attractive. She said it’s a simple question of finance: While the strong U.S. dollar has made purchase of imports cheaper, it makes travel here more expensive.

“That’s obviously a challenge for people,’’ Johnson said. “Any time they’re going spend their money, they want to go somewhere where it’s going to go further, not the opposite.’’

Johnson said so far there’s been no indication that the rhetoric coming out of Washington — and particularly comments about Mexicans by the new president — are harming tourism from that country this year.

She suggested any negative effect has been blunted by the fact that Arizona Gov. Doug Ducey has made an active effort to maintain relations with Mexico and Mexican officials and convince them that Arizona wants a partnership. And Johnson said her organization has an ongoing marketing presence in Mexico.

The strong dollar also has resulted in fewer tourists from some other foreign countries, particularly in Europe.

But there is a big exception: Arizona has become a growing hot spot of sorts for visitors from China.

Last year they amounted to just a fraction of all international visitors, with fewer than 77,000. But that’s a 20 percent increase from 2015.

Johnson credits some of that increase to the national “Brand USA’’ program, financed with donations from private sources and matched with the $14 the federal government collects from each international visitor under the Visa Waiver Program.

But Johnson said Arizona isn’t relying on that alone.

“We’ve had travel, trade representation in China for the past four years,’’ she said. “We’ve focused on it. We know it’s an important market and we know that the Chinese are coming here.’’

And there’s something else.

Agency spokesman Scott Dunn said there appears to be a multiplier effect of sorts.

He said the Chinese are big followers of social media. Dunn said that means when friends or relatives post photos of themselves at a place like the Grand Canyon, it generates an interest in those who see it to come and visit themselves.

“They shop like crazy,’’ he said, noting they’re helping out not just the retailers who sell the merchandise but also the tax rolls of the state and local governments.

All that money from all those tourists, Chinese and otherwise, adds up.

A study done for the agency concludes that 43 million domestic and international travelers spent that record $21.1 billion. That spending, according to the new report, generated $859 million in state taxes and another $893 million for local governments.

Granted, that’s up by just 1 percent over 2015 figures. But that takes into account that fuel prices last year were less than in 2015. Johnson said when that’s factored out, spending on everything else — from hotels and restaurants to recreation and entertainment — actually saw year-over-year revenue growth of at least three percent.

And the overall numbers are nearly 28 percent better than they were in 2009, when tourist spending tanked during the depths of the recession.

Some of that is aimed at domestic targets like Chicago and Seattle, along with a renewed emphasis on attracting visitors from the San Francisco area. But Johnson said the state cannot afford to ignore international tourists, saying that if Arizona can get them, there’s more to be gained as they stay longer.

The essence of the campaign, she said, will be not so much brand ID or logos, but instead wrapped around images of people doing fun things in Arizona.

“We try to show the visitor what they could be doing in Arizona,’’ Johnson said. “If we show a person hiking or someone playing golf, I want them to be able to imagine that they’re in Arizona doing that. If I’m in Chicago and it’s snowing and cold and blustery, I look at a picture of someone playing golf in Arizona, and I’m like, ‘OK, that’s where I’m going to be next week.’’’

Still, there are public relations hurdles to overcome, such as the national publicity Phoenix got last month when it was too hot for aircraft to take off. Johnson, in her best promotional mode, brushes that off.

“I will take a few minutes of a plane not being able to take off than being grounded for days in the snow,’’ she said.