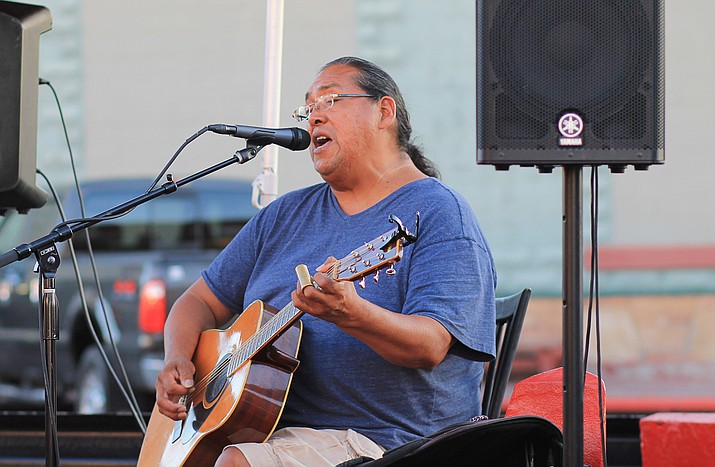 We knew he was good. But we didn’t know he was that good.

The classic rock covers and acoustic blues that filter down Route 66 and up Third Street in Williams always seemed a bit better than average, but no one would have guessed a Grammy nominated musician was in our midst.

Musician Aaron White is a regular fixture on the patio at Cruisers restaurant on Mondays and Tuesdays. Although most people in Williams hear familiar classic acoustic songs from White, his Native American flute melodies are what led to the Grammy nomination.

“My dad worked for GM, that’s how we ended up in San Francisco,” White said.

The White household was filled with music, with sounds ranging from rhythm and blues to Elvis to classic 50s and 60s music.

“My mom played a lot of Aretha Franklin and what they called soul music,” White said. “We played everything.”

White learned guitar and a variety of instruments as a child, but didn’t take formal lessons until he was in college.

“I took theory, composition and stuff like that,” he said.

While in the Army in Hawaii, White moonlighted with other soldiers in a rock band. There, his musical sound began to take shape.

“We just gravitated to music,” he said. “When I got out, I came back to the mainland and I just kept playing.”

White eventually found his way back to the Navajo Reservation and Flagstaff. He said he and his wife yearned for a quieter life for their family outside the big cities.

“Growing up in the city is crazy,” he said. “We always came back to northern Arizona in the summer and visited my grandmother on the reservation.”

White’s music began to expand from rock to a mix of traditional and mainstream sounds. He now plays solo acoustic instrumentals, flute melodies, reggae and acoustic blues rock. He said his music is influenced by the different experiences in his life and the people he has met.

White has been able to support his family through his music ventures. He has worked as a solo artist and with the bands Burning Sky, Skychasers and the Blue Stone Project. He has released nine CDs with Canyon Records, the most recent being “Hand Prints of Our People.” White is currently working on two new CDs, one with Native American flute and the other one vocals and original songs, with his wife, Marilyn.

Through White’s career, he has had the opportunity to play with musicians such as Jackson Browne, Bruce Cockburn, Shawn Colvin and Taj Majal. He often travels and collaborates with John Densmore of The Doors.

He has performed at the Lincoln Center and the Museum of the American Indian in New York City. He has also performed at several corporate functions such as World Scotland Bank, Chase Bank, Teva, the New York Giants Super Bowl party and Porsche.

He said when he was younger, he often toured in Europe and Canada, but now prefers to stay closer to home.

“I was on the road for 18 years with my band, Burning Sky and I just got burned out on it,” he said “I wanted to see my kids grow up. Most musicians I know are divorced two or three times…the road is their mistress.”

In Arizona, White often plays with his band, Blue Stone Project, which includes Gary Rasmussen on guitar and bass, and Ed Michaels on drums. He regularly plays at the Wild Horse Pass Resort in Chandler and other solo gigs in the area.

White became connected with Williams upon the tragic passing of musician Steve Reynolds in 2014.

“We had known each other for 25 years,” White said of his friendship with Reynolds. “He asked me if I would sit in for him while he was going through chemo. The owner liked my playing, which was similar to Steve. I got a call his cancer was worse and eventually he passed away.”

White said he enjoys playing a few days each week in Williams. He said it gives him an opportunity to work on new material in front of a crowd.

“Before Steve, I didn’t know there was live music in Williams,” He said. “But playing in a little gig like this is a lot of fun. I’ll do this and then I’ll go play for 1,500-2,000 people somewhere else. But it’s nice to come back here and do my own thing.”

Another focus for White is sharing the love of Native American flute with others. He said he thinks it’s important to hold on to the tradition of flute playing.

“You’re walking in two worlds,” he said. “You’re walking in a world of tradition and a world of modern society. You have to maintain that balance. But it’s important to hold on to the culture and language. People need to know their identity, where they came from, their roots.”

He recently held a lecture at the Grand Canyon for a school out of Florida.

“We made flutes with about a dozen kids,” he said. “We sat on the rim of the canyon by the Thunderbird and shared the history and I taught them how to play.”

White said the group took a bus out to the lodges and he held a flute performance at sunset.

“The light hit the edge of the canyon and below the rim was dark,” he said. “Just as I was playing, as the sun was going down, a condor flew up over the wall. Everyone went nuts. It was pretty magical.”

White can be heard on Mondays and Tuesdays at Cruisers, and his music can be purchased from most popular retailers including canyonrecords.com and Spotify.