Pinwheels of Hope raising awareness of child abuse in Arizona 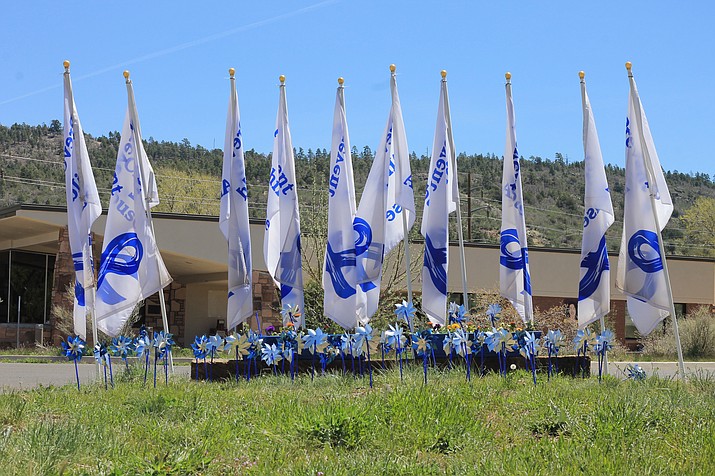 Flags and pinwheels fly and spin in the cool spring breeze at the Williams Health Clinic. The Pinwheel of Hope Field remembers the 87 children who died of child abuse in Arizona last year.

In honor of April being Child Abuse Prevention Awareness Month, North Country HealthCare clinic in Williams planted a Pinwheels of Hope Field to remember the 87 children who died of child abuse last year.

“Each and every pinwheel and flag represents a child who died at the hands of child abuse in Arizona,” said Linda Taranto, family health advocate at the clinic.

According to Taranto, raising awareness of child abuse is key to prevention. She said a goal of the clinic was to bring awareness to the Williams community of the number of children who suffer and die from each year from abuse.

“That’s just way too high of a number,” she said. “That’s what the (pinwheels and flags) are for. To bring awareness to the community of the children who have died and (let people know) there is a problem.”

According to First Things First, a voter-created, statewide organization that funds early education and health programs, 90 percent of a child’s brain development happens by age five. Negative experiences can have lasting impacts to a child’s physical and emotional health, their performance in school and their likelihood to engage in risky behaviors.

Research shows that chronic stress on a young child, often induced by abuse and neglect, can have adverse effects on the body’s nervous system later in life, causing poor responses to normal environmental cues.

North Country HealthCare offers a number of resources for education and prevention for families who need help or know of a child in need of help.

“They can make an appointment to see me and I will go over resources, connect to them to training … there are resources out there for training. There is a problem in Arizona right now with (abuse) and (prevention) starts with taking some of the stress off families,” Taranto said.

More information or to schedule an appointment with Taranto at the Williams clinic is available at (928) 635-4441.

Blue pinwheels give voice to children who have died from abuse
Guest Column: We all have a role to play in ending child abuse; what will be yours?
Around Williams: week of April 8
Child abuse prevention education on tap for Williams, volunteers needed to help coordinate programs
Williams students earn scholarships for child abuse prevention awareness efforts
Contact Us
Submit Questions, Comments, or Story Ideas