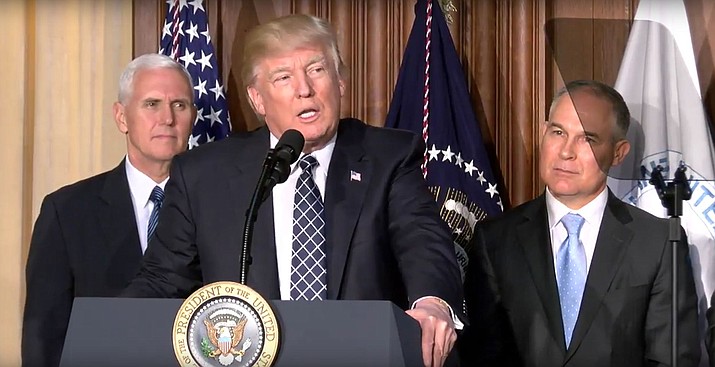 GRAND CANYON, Ariz. — President Donald Trump made good on one of his campaign promises — to donate his entire presidential salary —by handing over his first-quarter salary check to the National Park Service (NPS) April 3.

Interior Secretary Ryan Zinke presented the check for $78,333.32 to Harpers Ferry National Historical Park Superintendent Tyrone Brandyburg at White House press secretary Sean Spicer’s daily press briefing. Spicer told reporters at the briefing that the president “is personally proud to contribute the first quarter of his salary to the important mission of the Park Service.”

Zinke said the funds would go toward maintaining and addressing infrastructure needs at about 25 historic battlefield sites nationwide.

“These historic places tell the story of conflicts that helped shape our country’s history, and they also honor the many men and women who have given their lives in service of this great nation,” Zinke said in a statement. “I’m honored to help the president carry out his love and appreciation for our warriors and land.”

The check, however, represents less than one percent of the $229 million deferred maintenance backlog on national battlefields alone.

Trump, whose net worth is around $3.5 billion, frequently touted his plan to forgo the president’s annual salary of $400,000 on the campaign trail. Because the Constitution stipulates that the president cannot outright refuse a salary, Trump instead said he would donate the entire amount to charity. The NPS was the first entity approved by the White House Counsel to receive funds.

Critics, however, say the amount donated by Trump is the equivalent of pocket change compared to the amount of funding the agency stands to lose if his budget is approved by Congress.

The move comes after Trump proposed a 12 percent, $1.5 billion cut to the Interior Department’s operating budget. It’s not clear yet how much of that will be taken from NPS, which is currently facing a historically-high $12 billion deferred maintenance bill. Trump has said he wants to reduce funding for land acquisition while investing in deferred maintenance projects.

Michael Brune, executive director of the Sierra Club, called the move a publicity stunt, a distraction that falls far short of the amount of money needed to restore America’s parks for future generations.

“America’s parks, and the people and economies they support, need real funding, not a giant fake check,” Brune said in a statement. “Parks are a good investment and we must invest now if we want them to be around for our kids.”

The Center for Western Priorities, a conservation policy organization, also criticized the move.

“You can’t propose $1.6 billion in cuts to our public lands, then pretend a $78,000 donation makes it better,” said Greg Zimmerman, the center’s deputy director. “The White House needs to protect America’s parks and public lands, not pay lip service to them.”

Trump is not the first sitting president to donate his salary. George Washington, who was worth about $500 million in today's dollars, attempted to do so in 1789; however, Congress determined that politicians must be provided a salary, beginning with the Commander in Chief, to prevent potential bribery and corruption in less-wealthy seekers of public office.

Self-made millionaire Herbert Hoover, who made his fortune in mining, and John F. Kennedy, who came from a very wealthy family, both chose to donate their presidential salaries.