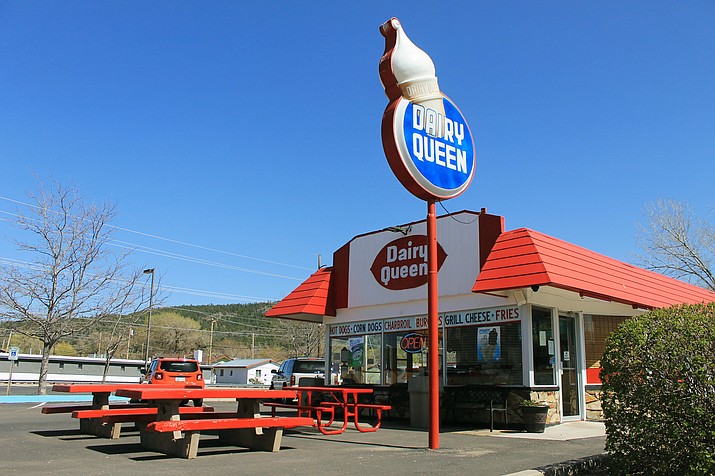 Dairy Queen in Williams has been owned by the Pettit family since 1962.

WILLIAMS, Ariz. — Fruit trees are budding, dormant bulbs are blooming and the Williams Dairy Queen is open. All are signs that spring has sprung in northern Arizona and soon everything will be turning green.

Those who live in Williams count the days when the Williams Dairy Queen opens each year and their reemergence marks the awakening of town every spring.

Celebrating 55 years of business, the Williams Dairy Queen has observed many changes in the landscape including the rise of popularity of Route 66, the emergence of Interstate 40 and the rise of the Grand Canyon Railway.

Since the 1950s, Williams Dairy Queen has been supplying travelers and locals with soft serve ice cream and home cooked burgers on Historic Route 66.

“My mom bought it in 1962 from the original owners,” said current owner Debbie Pettit. “It was originally located on the east end of town where the dog supply store was located.”

Pettit’s mother, Dorothy Payne, operated the store at the east side location for 15 years before constructing a new building in 1977 at the present location near Safeway on the west side of town.

According to Pettit, the building has not changed much over the years.

“We try to make a small change every year, but it pretty much looks the same,” Pettit said.

Many people see the business as classic Route 66 architecture and value the historical significance as evidenced by the hundreds of photos that show up in a Google search.

“Our sign is famous,” Pettit said. “We have people stop and take pictures of it almost daily.”

Pettit said the blue and red Dairy Queen sign is from the original 1950s location and was moved to the present location in 1977.

The curl on top of the soft-serve ice cream is considered a Dairy Queen trademark.

The largest Dairy Queen is in Riyadh, Saudi Arabia, where ice cream is always in season.

The busiest Dairy Queen is in Charlottetown, Prince Edward Island.

Blizzard was introduced in 1985

Several members of the band No Doubt worked at Dairy Queen in the early years of their band.

Original owner jack McCullough called it Dairy Queen because his creation was a queen among dairy products.

The most popular Blizzard is Oreo.

Texas has 600 Dairy Queens, more than any other state.

“We haven’t done much to it,” she said. “We put some new lights in it a few years ago and we paint the pole, that’s about it.”

The Williams Dairy Queen also witnessed significant changes to the landscape when Safeway built a new store on the neighboring lots in the 1980s.

“My mom originally owned an L shaped lot here,” she said about the present location. “Safeway bought that from her and the gas station next to us, but this little piece here is ours.”

Pettit said she tries to keep much of the historical structure the same. She has received some pressure to change the signage, but has received a lot of support to keep things the same.

“Some of our equipment is still original from the 1950s. Our grill is one of them,” she said. “People come back here for that, my mom always just did it her way.”

Pettit said her family owns the franchise rights that extend from Ash Fork to Williams, up to the Grand Canyon and to the edge of Flagstaff.

“I used to dream big and thought of expanding up to the canyon,” she said. “But I’m tired. My kids were born and life passes you by. Who wants to do it now?”

She said she is not sure if anyone in the family will continue the store when she retires.

“I don’t know, they know its hard work,” she said. “It’s great when you have your kids because you can do what you want, but they know how hard it is.”

The Dairy Queen franchise began with a father and son partnership in August of 1938 in Green River, Illinois. They has been experimenting with a soft frozen dairy product that led to 10 stores by 1941. Today, Dairy Queen is one of the largest fast food systems in the world, with more than 6,000 restaurants in the United States, Canada and 18 other countries.