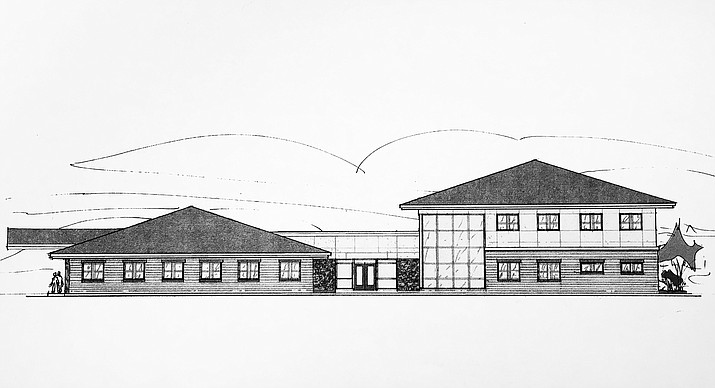 An artists rendition of the purposed new health clinic in Williams.

The city of Williams will be getting a new health clinic thanks to a $6 million grant from Northern Arizona HealthCare Foundation.

The Williams Hospital District Governing Board has been working to find financial backing to replace the existing clinic that was built in the 1950s.

According to George Glen, the hospital board is in the preliminary stages with architectural plans being finalized. The board hopes to begin accepting bids for the new building soon.

The plan is to keep the old clinic open while the new clinic is under construction. The building will be built where the existing parking lot is located and will face east.

The governing board plans to continue their agreement with North Country HealthCare (NCHC) to provide services at the new clinic.

“We are excited to get a new facility to operate out of, it will be wonderful,” said NCHC Chief Operations Officer Marti Neff.

Neff said the Williams Hospital District has sought input from NCHC on the construction and design of the new building.

“It’s going to be a beautiful building,” Neff said. “They asked us to help with the design, which was very nice of them. They said they would like our help since we have to function in it.”

Mary Case, Supervisor at the Williams clinic said NCHC operates in 14 communities in northern Arizona. She said NCHC is a federally qualified community health center with 23 medical offices. She said the organization not only provides medical care for community members but also has educational training programs for students studying to be doctors, family nurse practitioners, nursing students and dentists.

“We train them and mentor them in rural health,” she said.

Williams Hospital District governing board member Katie Glen said a lot of work has gone into finding funding for the new clinic. She said former board president Linda Russell was instrumental in grant writing for the group.

“We have all worked tirelessly to make this happen,” Glen said. “Those of you who have done grants know what that is like. We are very proud of that and very grateful to the Northern Arizona HealthCare Foundation.”

Glen said a needs assessment was done several years ago and it was determined that to modernize the existing structure would cost approximately $9 million, and building a new facility was about $6 million.

“Therefore this was the obvious choice,” she said.

Glen said the board hopes the new clinic will allow health care workers to expand operations and provide more services to the community.

The Williams Hospital District governing board plans to hold an open house event soon at the old clinic to present the plans for the new clinic to the community.

“We have renderings, we have floorplans, we’ve got a lot of information,” Glen said. “It’s a community clinic so we want the community to be on board. That’s what we want is the community’s support.”