In the counselor’s office: Planning for high school and beyond 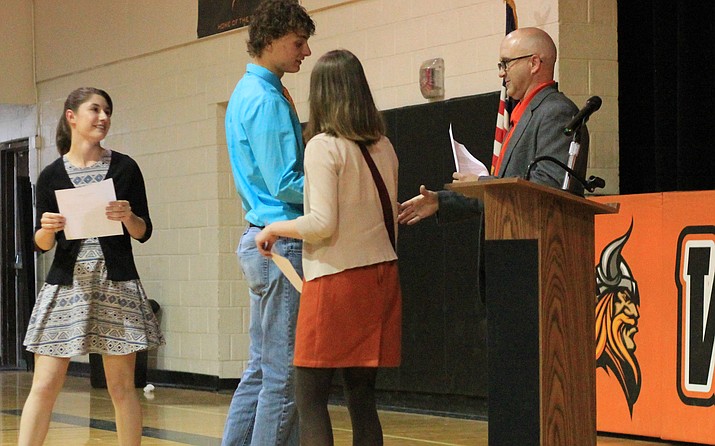 Jim Powers wants to be bothered.

“Give me an hour, give me five minutes, call me, text me, email me ... we need more parents involved with their child’s academics.”

In his second year as the Williams High School (WHS) counselor, Powers is on a mission to meet every parent of every student at the school.

“We need more parental involvement,” Powers said. “I see parents when their kids get Fs, I don’t see them when they’re getting As, Bs or Cs.”

Powers believes the more parents are involved with their student’s academics, the more successful students are in the school.

“I know parent involvement is tough,” he said. “I know people have to work, but this is their kid’s future.”

Powers said one easy way for parent’s to help their students is to utilize PowerSchool to monitor their child’s grades.

WHS recently implemented PowerSchool, a student information system that gives parents easy access to student data via a standard web browser. With login information from the office, parents can stay on top of student progress with online access to grades, attendance information and teacher comments.

Each year, Powers addresses incoming freshmen in a special presentation. He wants them to know that preparation for their college and career aspirations begin the first day of their freshman year.

“I try to let them know that grades matter,” he said.

Powers lays out a four-year plan for the students: Ninth grade should focus on building a good base for grades, 10th grade is taking career preparation classes, 11th grade is looking at future career paths, and 12th grade is applying for colleges, finding scholarships and looking for internships.

“I try to impress upon the kids that their grades mean money,” he said.

Powers tells the students the current average tuition for a 4-year state university.

“Right now it is $82,000 for four years of just tuition and fees,” he said. “That doesn’t include books or living expenses.”

Powers lets students know that their grades make a difference. He tells them how good grades can bring them scholarship money for that tuition. He breaks down the college tuition into terms they can understand.

“I tell them it’s like they are getting paid to go to school,” he said. “I break it down hourly. It’s like $40 per hour (if they receive a scholarship).

Powers said good grades not only open the doors for scholarships for students but also help them develop good study habits. Powers said many high school students manage to graduate without doing much homework, but he tells them college isn’t that way.

“When I went to college they said for every hour of class you need to be doing two hours of studying,” he said. “Now they are saying its three hours of studying. With a full 15 hour load of classes, that’s 60 hours of school, which is more than a full-time job.”

Powers said he wants students to stay organized and have a structured study time each night.

“They need to find a balance between fun, work and academics. It’s easy to choose anything but academics,” he said.

Powers said he knows not all students can maintain good grades and many are not college bound, but he still tries to push each student to achieve more.

“If you are a student who gets Cs, let’s work with that,” he said. “Always strive to do better, there are opportunities out there for that. Just because students don’t get straight As doesn’t mean that they’re not going to be able to go to college.”

Powers said there are many opportunities for higher education that don’t mean attending a four-year university.

“There are so many different types of colleges,” he said. “There are technical schools, community college and trade schools.”

Powers said he wants students to plan ahead and by the time a student is a junior or senior they should have a good idea of what they want to do beyond high school.

“I see a lot of students who would benefit from going to college,” he said.

Power said many families are content with their children just graduating from high school, but he wants to emphasize that there are many opportunities for higher paying jobs with even just two-years of higher education.

“Colleges have a lot of programs set up where you can get training in just two years that will help,” he said.

Powers said Northern Arizona University, Coconino Community College and Yavapai Community College have many options for students. Besides a four-year degree at NAU, CCC and YCC have certificates and two-year programs in fields such as welding, carpentry, computers, fire science, nursing, sustainable building and electricity.

Powers encourages parents and students to come to the high school and meet with him. He said he would like to create dialog with parents about their student’s progress at the high school, and help them plan for their child’s future.

“There are opportunities for life after high school and you don’t have to settle,” he said.

In next week’s edition: Part two of planning for high school and beyond — preparing your student and finding money for college.