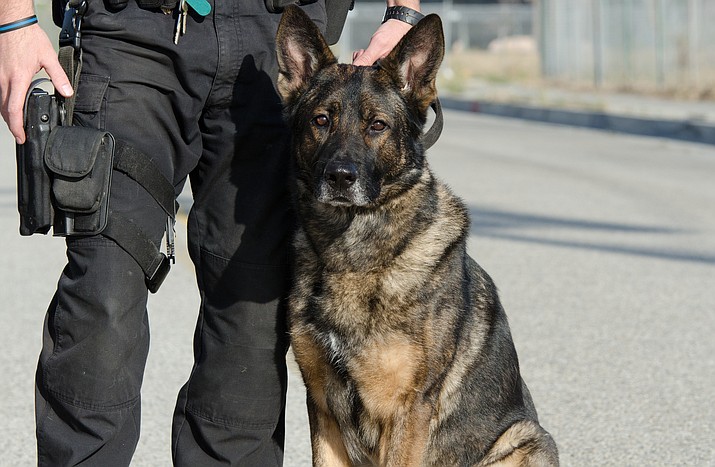 A police dog with his handler.

A K9 police dog earned his keep March 20 when he alerted deputies to drugs in a vehicle near Ash Fork.

On March 20 at about 7:15 AM, a Yavapai County Sheriff’s Office K9 deputy noticed a grey 2016 Nissan Sentra traveling east on Interstate 40 in Ash Fork with both the driver and passenger displaying abnormal concern about the presence of the Sheriff’s vehicle.

After quickly slowing, the Nissan exited the freeway and pulled into a nearby gas station. From a distance, the deputy maintained visual contact as the pair seemingly stalled for time before leaving the gas station.

When the deputy pulled behind the Nissan, the driver suddenly turned into a café parking lot in the 100 block of Park Avenue. Both occupants exited and walked quickly inside the café apparently attempting to avoid interaction with the deputy and disassociate themselves from the vehicle.

Because of the suspicious actions of these individuals, the deputy chose to deploy his police dog, K9 Miley, for what is known as a free air sniff of the vehicle exterior. During the walk around, Miley displayed alert signals to the rear passenger fender area. As a result, deputies went to speak with the two occupants in the café. The driver, later identified as 31-year-old Robert Deleon, attempted to enter the ladies’ bathroom when deputies approached. He was detained along with his passenger, 38-year-old Miguel Patino. Both are from Delano, California. Deleon had two meth pipes in his sock and admitted to a small amount of marijuana in the vehicle.

Based on the K9 alert, deputies conducted a search of the Nissan to locate the source. While checking under the rear seat, deputies noticed tool marks on a gas tank component and became suspicious, as a newer rental vehicle is unlikely to have this type of work done to the fuel system.

When deputies removed the tank component, it exposed 14 one-pound packages of methamphetamine concealed in a false compartment. Numerous recent gas receipts were found, indicating several tank fill-ups to compensate for the reduced tank capacity. Both suspects denied knowledge of the methamphetamine load.

Citizens can contact the Yavapai County Sheriff’s Office with information or questions (928)771-3260 or www.ycsoaz.gov.