In our community: Caldwell serves students and families 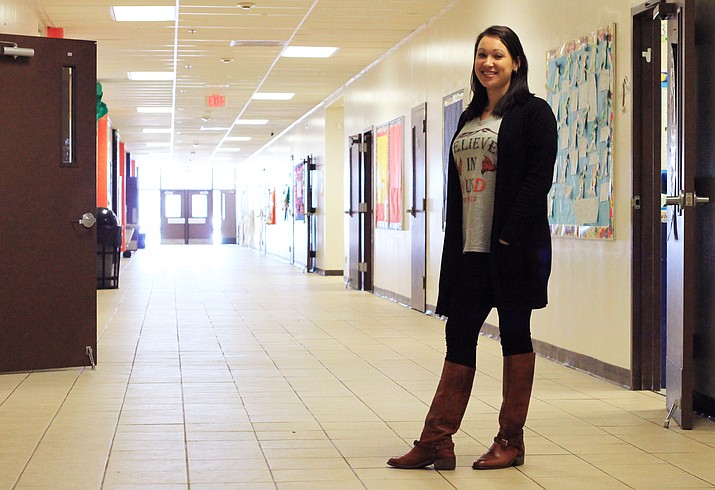 Maya Caldwell is the Director of Student Services at Williams Unified School District.

The academic playing field is not always level at schools across the country, and in Williams where approximately 65 percent of students receive free and reduced-priced lunches, the playing field can be even more challenging.

That is where Student Services Director Maya Caldwell steps in.

Caldwell is finishing her first year in a newly created position at Williams Unified School District and has found the position an important service for Williams students and families.

“I do anything that it takes to support families and students,” Caldwell said about her position.

A large portion of Caldwell’s duties is supporting homeless youth and families. Part of Caldwell’s position is funded by the McKinney-Vento grant.

The McKinney-Vento Education of Homeless Children and Youth Assistance Act is a federal law that ensures enrollment and educational stability for homeless children and youth. The program provides federal funding to states for the purpose of supporting district programs that serve homeless students.

The McKinney-Vento Act defines homeless children as individuals who lack a fixed, regular, and adequate nighttime residence. Those who fall under this definition include children in shared housing due to economic hardship, children living in motels or campgrounds, children in emergency or transitional shelters, or children living in cars, parks, public spaces or abandoned buildings.

“We have 109 students identified as homeless in Williams,” Caldwell said.

Caldwell said she often assists these students with basic needs such as showers, laundry, clothing and school supplies.

“I gave out a lot of shoes and jackets this year,” she said.

Caldwell’s office is at the elementary school, but she also reaches out to unaccompanied youth —students who live on their own —at the high school.

“I mostly meet with them to see how they are doing,” she said. “Once I assess there is an economic need, I can accommodate them and help take the stress off. I want them to graduate so I ask them what I can do to help.”

Caldwell also connects families to services available in Williams such as organizations that provide rent and utilities payment assistance or the food bank.

Caldwell said reaching out to homeless and disadvantaged youth can be a challenge. She said she joined the Coconino County Coalition for Children and Youth (CCC&Y) to help her in the endeavor.

“It’s a small grassroots organization with powerful people representing children throughout the whole county,” she said.

CCC&Y works to ensure people have access to recent statistics, current events, and critical issues impacting children and youth at the local, state and national level.

Caldwell said she appreciates that the group doesn’t just focus on Flagstaff, but also on the rural communities in the county.

Caldwell attends meetings and brainstorms with other members about ways to reach under-served youth in small communities.

“Right after I joined, the group gave us donated gift cards and other supplies to give to our students,” Caldwell said.

“I have 31 kids who are going through CST right now,” she said. “I set up meetings with parents to help come up with a plan for intervention and accommodations.”

According to Williams Elementary-Middle School principal Carissa Morrison, the Student Services Director position was created after the loss of a school counselor position a couple years ago.

She found the year without student service support difficult for the staff and administration, and challenging for the students.

“There was a void when the counseling position was terminated,” she said. “I saw there was a need for more direct student support.”

Morrison said the year before Caldwell was hired, duties were distributed among the staff for homeless youth support, child study team organization and academic support.

“It didn’t work as well,” Morrison said. “Because if you think about it, many students who are struggling academically might also be struggling at home and need all of the support systems.”

Morrison said Caldwell is able to see the whole student along with their families. She is able to provide for their emotional, behavioral and academic needs at the same time.

“She does all this to enrich and improve student’s educational experiences,” Morrison said.