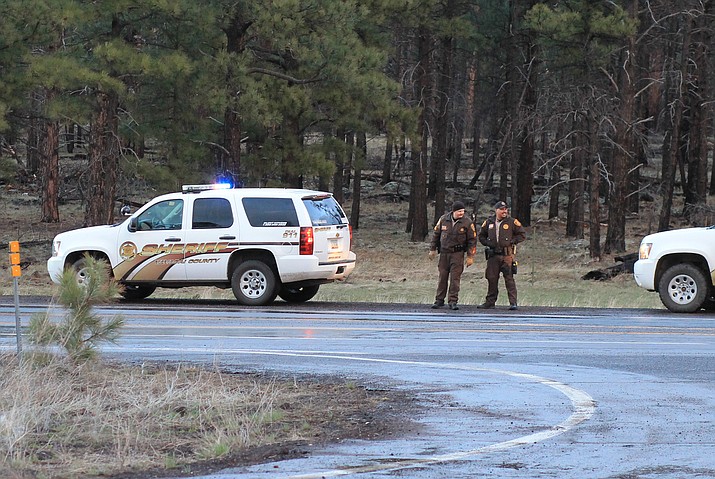 Yavapai County Deputies gather after the arrest of John Freeman March 27. A manhunt ensued after Freeman fled a traffic stop, shot at deputies and ran into the woods east of Williams.

The sedan stolen by John Freeman and Gideon Eads became disabled and crashed just north of Bearizona on State Route 64. 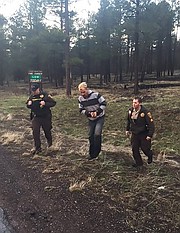 Deputies bring John Freeman out of the woods following his arrest March 27. 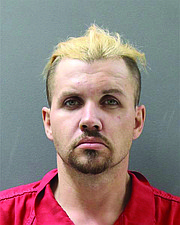 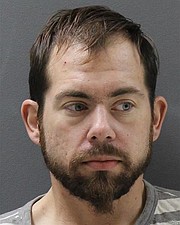 Interagency training paid off March 27, when law enforcement officers from a variety of organizations converged in Williams to search for an armed suspect who fled a traffic stop and shot at deputies.

Officers from Yavapai County Sheriff’s Office (YCSO), Department of Public Safety (DPS), U.S. Forest Service and Williams Police Department (WPD) were on the scene within minutes, although the subject was not captured until evening.

The departments quickly organized an incident command center with leadership from each responding agency.

“When we got the leadership from each agency together, then we had a better handle on who was out there and what everybody was doing,” said Brian Tozer, a lieutenant at Coconino County Sheriff’s Office (CCSO). “We wanted to keep the subject in that specific area, and not run in head first. It’s not like on TV when they all run in and take the bad guy down. When somebody has a firearm and they are shooting at you, you have to think about the safety of the personnel out there as well.”

Tozer said the departments routinely train together and conduct scenarios to become familiar with each other and learn from each other.

“Training and working together makes things a lot easier when it comes to communication because you walk out there and you know people,” Tozer said.

News travelled quickly across social media and through text alerts as the community became aware of the subject who ran into the woods just north of Bearizona.

“It was chaotic at first,” Tozer said. “Setting up containment was our first step.”

Tozer said officers were stationed along Route 66, Interstate 40, State Route 64 and a bordering subdivision to attempt to contain the subject.

According to YCSO, the incident began near Ash Fork on I-40 when a YCSO deputy initiated a traffic stop on a sedan for a moving violation. As the deputy approached the vehicle, the driver, later identified as 31-year-old John Freeman, sped away. A passenger tried to jump out of the moving vehicle and was dragged for several yards before freeing himself.

The sedan continued eastbound on I-40 reaching speeds up to 120 mph. During the pursuit, Freeman fired a handgun out the passenger side window striking a motorhome.

The vehicle engine malfunctioned as the vehicle entered Williams, and Freeman left the freeway at exit 165. Freeman attempted to jump out of the car and was dragged as the car plunged down an embankment and crashed into a tree.

Freeman freed himself, ran into the woods and fired at deputies as he climbed over a wire fence. Rear seat passenger, 30-year old Gideon Eads, climbed out the rear passenger door and began to run, but was caught within minutes.

As some officers set up containment, other officers were dispatched to Bearizona to facilitate a search and evacuation of the 150 visitors and staff at the wildlife park.

“We had to search every vehicle and clear every building and structure at the facility,” Tozer said. “Then we had to clear the ADOT (Arizona Department of Transportation) yard where we set up our command post.”

“SWAT has a different level of training to deal with specific threats,” he said. “They have specialized equipment, whether its drones or robots or other things. They stay within their group as they search and coordinate their efforts.”

Williams Police Department also responded to the incident to work with responding deputies and DPS officers by setting up road blocks and evacuating Bearizona.

Nixon said officers were dispersed throughout the community with various assignments. Road blocks were set up along Route 66 and State Highway 64 and officers initiated the search and evacuation of Bearizona.

Nixon said Bearizona staff quickly brought people together at the gift shop while officers and DPS guarded the perimeter. Visitors were searched and brought out of the park in small groups.

“It’s frustrating because we don’t know if the shooter got into that crowd,” he said. “We tried to handle people carefully, especially with the different cultures you have there.”

As the search for the subject continued, Nixon ordered a lockdown of the local schools.

“Even though it’s a long way from our schools, the guy was on foot and he was armed,” Nixon said. “We got all our guys in to protect our most precious assets, which are out children and our community.”

Nixon said WPD assisted YCSO with the search but spent most of their manpower on protecting the city.

“We had several calls from people thinking they had sighted this guy, but it wasn’t him,” Nixon said. “But that’s what we want. We want them to call, they are the eyes and ears of our community.”

“It is something we trained for; in this particular one we had kids stay in locked rooms but we continued with education,” he said. “We didn’t just hide and turn the lights off.”

Honsinger said he had no problems from the students once a lockdown was initiated.

“The kids did a great job, you think sometimes think that high school kids will battle with you,” he said.

“But they understood the gravity of the situation and stepped up to the challenge. There was no whining or complaining.”

Honsinger said he and Nixon were concerned about how to release the students. The WPD did not want students out in the community and decided to have parents pick them up.

“We had to prepare to release these kids, but we didn’t want them walking home,” he said. “It was a bit chaotic but we didn’t hear any complaints.”

As evening settled in and a cold front moved into the area, Freeman eventually came out of his hiding spot in a culvert just north of the ADOT yard and turned himself into deputies.

“When you aren’t from this area, it doesn’t take long to realize how cold it can get,” Tozer said. “When it starts hailing, you’re out in the open, and you’re wet, people have a tendency to not keep going. It was really good for us and the rest of the community that he was found and we didn’t have to do night operations.”

Freeman was found to have a warrant for drug related charges out of Kingman, Arizona. He also had a previous felony conviction from Oregon for vehicle theft. The sedan driven in the incident was stolen out of Kingman.

Eads was booked for vehicle theft at the Camp Verde Detention Center.

The front seat passenger who was able to escape from the vehicle during the initial traffic stop in Ash Fork was seriously injured but not charged. YCSO reports he had simply hitched a ride with Freeman and Eads.