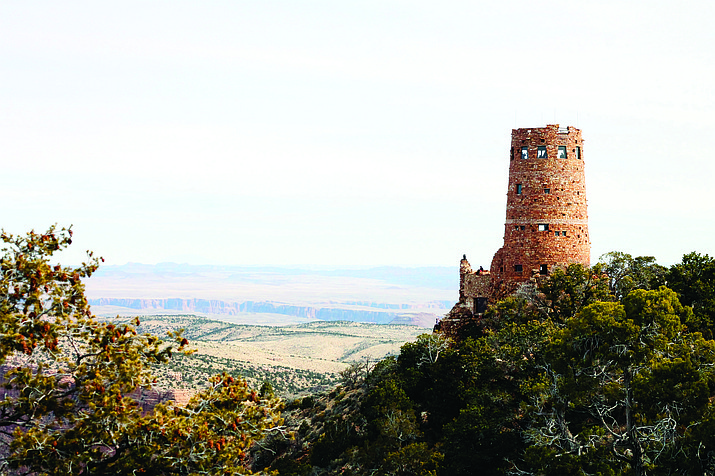 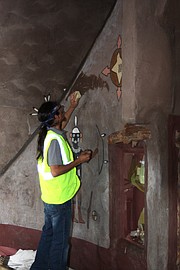 Ed Kabotie, grandson of Hopi artist and mural painter Fred Kabotie, is assisting the Conservation Associates team with the project.

The Conservation Associates team is currently in the process of maintaining the second floor of the Watchtower. The left side of this painting has been cleaned and toned, in contrast to the right side, which still awaits cleaning. 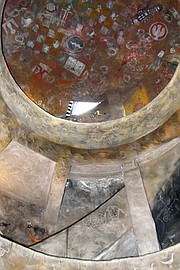 The Desert View Watchtower is home to three floors of tribal murals and paintings,including those on the second floor by Fred Kabotie. Other artists contributed to the third and fourth floors.

Water-soluble salts in cement-based plaster create white stains on the tower walls due to leaks on the upper floors.

This is his history. A direct connection to his family and people.

Looking around, Kabotie explains the significance of some of the figures on the walls. The largest mural, he said, is the story of the first Hopi person to travel down the Colorado River.

“This young man goes down the river, probably about 1,000 years before Major (John Wesley) Powell and he marries among the ancient tribal people of Mexico,” he said. “He then returns to his home up by Navajo Mountain.”

Kabotie went on to explain that his grandfather was using a style of mural that came about in the 16th century.

“Colter modeled the Watchtower on the astronomical observatories of several different Puebloan cultures in the region,” he said. “She coupled it with the Kiva downstairs, reminiscent of the Kivas in the Four Corners area, so my grandfather took inspiration from those two things.”

Like most historical buildings, time and the elements have dulled the sharp black, pink, gold and turquois hues used by his grandfather in 1933. That’s where Angelyn Bass and her team of conservators comes in.

Bass, the project leader, describes the effort in terms of conservation, not restoration — a term often applied to historic wall paintings. The goal of the project, she said, is to maintain the integrity of Kabotie’s original works.

Bass indicated several places around the room where water running down the unsealed plaster walls has caused streaks and staining in both painted and non-painted areas.

Asked about using a sealant on the untreated plaster walls, Bass pointed out that sealing the walls would only trap moisture on the surface, causing more damage in the long run.

“The cement plaster is very durable, but it inherently has soluble salts in it,” she said. “When those salts come through, they cause the white stains you see.”

Team member Beth Gersten, who has an artistic background in mural painting, carefully mixes paint to match the tint of the brown plaster and brushes it on in layers to mimic the tones and textures of the wall. The paint is only being applied on the bare walls, not the murals themselves.

The team of six, including Kabotie, is more than halfway through the process of meticulously cleaning the walls armed only with distilled water, paint brushes and small cosmetic sponges. The room was dusted and vacuumed first in an effort to purge it of nearly a century’s worth of dirt.

“There’s been a build-up of almost 80 years of dirt on the interior,” Bass noted. “It obscures the paintings and it affects the condition of the walls. It’s more of a maintenance and cleaning project than any kind of restoration.”

After the cleaning of the second floor is complete, the team will return next year to work on the upper floors. Bass explained that the water damage becomes worse toward the top of the building, so the project will take a little longer to complete on those floors.

Along with cleaning and maintaining the walls, the project will also survey the building itself. Douglas Porter, an architectural conservator with the School of Engineering at the University of Vermont, is collecting data about external factors that affect the condition of the both the building and the murals.

Porter noted that Colter’s use of cement-based plaster has weathered the exposure very well in contrast to other common building materials at the time, and that Fred Kabotie himself used many oil-based pigments, which will repel water.

“We’re still trying to figure out the building, what can be repaired, and what we have to live with,” he said. “We’re thinking about how we might use this information to create a better environment for the paintings.”

Data from the sensors will be analyzed for future efforts to preserve the structure of the building and manage visitor usage.

“The conservation is not just about the wall paintings,” Bass added. “The room was designed with an experience in mind, and we’re also conserving that experience and feel of the room.”

For Kabotie, who is presently serving as the artist-in-residence at the Museum of Northern Arizona, the experience of working on the project is not only about the art, it’s also about the relationships surrounding and emerging from the iconic structure.

“This was a real thrill to me, to be able to come out here and work on a historic building of my grandfather,” Kabotie said. “It’s very powerful for me. This watchtower to me represents a very different time and a very different relationship. It represents a time when the Canyon had a very interactive relationship with tribes. So many different cultures come to this place every day. The conservation project in some ways is like a revitalization of the relationship between the Canyon and the tribes.”