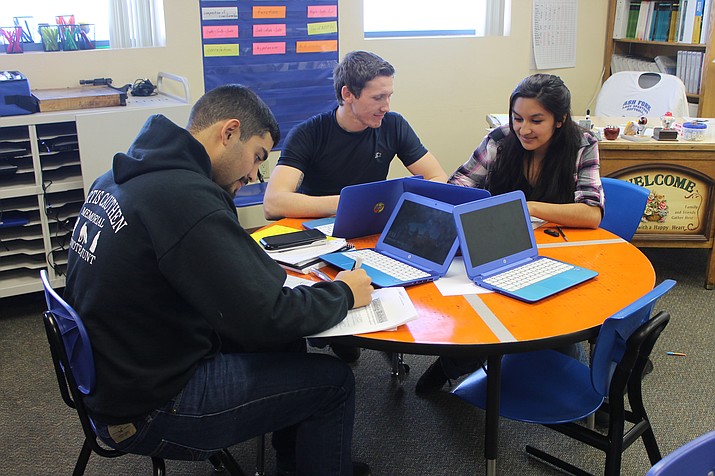 Ash Fork Unified School District math students work on an assignment. The school district received one of the highest passing rates on the AzMerit tests for rural northern Arizona schools. 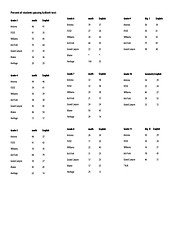 WILLIAMS, Ariz. — The Arizona Department of Education released the final AzMerit statewide assessment for all Arizona schools to the public Sept. 16.

The 2015-2016 AzMerit results showed marked improvement over the first year of testing for many rural schools in the Williams-Grand Canyon area.

Students in grades three through twelve took the tests in April and May of 2016 and results were distributed to schools in July of 2016. The tests assess the Arizona College and Career Ready Standards adopted by the Arizona State Board of Education in 2010 but only include the subjects of math and English-Language Arts (ELA). Of Arizona’s 1.1 million students, 38 percent were proficient in both the math and ELA portions of the AzMerit. Those scores are up from the 34 percent passing rate for ELA and 35 percent passing for math in 2015.

All five local elementary schools showed gains at the third grade level when compared to the 2015 test results. Williams showed the most improvement going from a 24 percent math passing rate in 2015 to a 55 percent passing rate in 2016. Williams also showed tremendous gains in ELA going from 13 percent in 2015 to 45 in 2016. Ash Fork and Maine School third grade students also reported gains.

“Overall, I am very pleased with our school’s performance on AzMerit this past year. We had growth on every single AzMerit test at every single grade level,” said WEMS Principal Carissa Morrison.

The Williams-Grand Canyon area middle schools showed mixed results on the AzMerit test with most scores hovering around the state average. Maine School, Ash Fork, Heritage and Williams were at the top for percent passing although none of the schools matched both the math and ELA percent passing for the state. All three schools surpassed FUSD schools.

“These low passing scores concern us and we have already had some parent meetings with this class,” Staples said. “We’re really trying to change the class culture with that grade…take the steps that are necessary at home and at school. We’re looking for some big growth…”

“I think there were many factors that contributed to this year’s higher scores,” said Morrison. All of our amazing students and staff worked together with a clear goal: academic achievement for all. We knew that our school was better than what last year’s test results indicated and we wanted to prove that to ourselves and to our community.”

Ash Fork High School had the highest percent passing for both math and ELA for ninth, tenth and eleventh graders when compared to other Williams-Grand Canyon area schools. For ELA, 60 percent of Ash Fork high school students passed the test. For math, 44 percent passed. These scores far surpassed the state averages of 31 and 33 and FUSD averages of 31 and 27 respectively.

“I was most pleased with the success at the high school level,” said Staples. "We had huge gains there. We met with teachers and staff over the summer and discussed what we want an Ash Fork graduate to look like. We made some staff changes and the current staff changed their instructional methods. The biggest problem we had was low expectations so this year we focused on mandatory homework, getting our expectations up and teaching at or above the high school level."

“Our freshmen did really well on both the ELA and math tests,” said WUSD Superintendent Rick Honsinger. “The first thing we did was define what curriculum we were using. Next, we owned the previous year’s scores and started breaking them down to find out what we needed to work on.”

Students in grades three through twelve took the AzMerit math and English Language Arts tests in April and May of 2016.

Grand Canyon eleventh graders had the highest percent passing for Algebra II at 46 percent. Ash Fork led the ELA results with 45 percent passing. Williams math and ELA passing rates improved from 2015 but were still significantly lower than the state averages.

“Honestly I think we can improve on each AzMerit test at every grade level,” said Honsinger. “The students are more prepared this year than the students in that same grade level last year, so they are prepared to do better overall.”