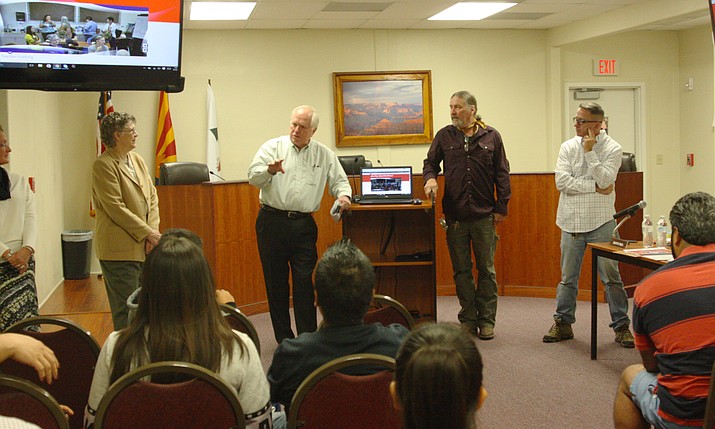 TUSAYAN, Ariz. — For the first time since the town of Tusayan incorporated in 2010, the Grand Canyon School District (GCSD) moved its meeting to Tusayan Town Hall Sept. 14.

In addition to regular school board business on the agenda, school administrators gathered an hour prior to the board meeting to address the Tusayan community’s questions and concerns.

After being asked about the learning structure at GCS, Bria announced that the school had a formal curriculum, Beyond Textbooks, in place and had been successfully re-accredited by AdvancED, a national accreditation organization that had previously placed the school district under review, citing seven areas for improvement.

After completing its evaluation earlier this year, AdvancED approved reaccreditation for the school. Four of the seven areas for improvement were met entirely, leaving only three remaining on-going areas: continuous learning models, continued instructional models of teaching and learning and curriculum.

According to Rowland, one of the biggest challenges to developing curriculum guidelines and keeping them in place is administrative turnover, something he believes he has addressed this year with the promotion of two Grand Canyon School (GCS) employees to administrative roles.

“The biggest hindrance to a continuum of education is turnover,” he said. “The first thing I did when I arrived here was find younger, dedicated individuals who had shown a commitment to the district and were ready to step into administrative roles. The future of our school district lies right here with these young people. No more people coming in and staying for a couple years and moving on.”

Bria, who stepped in as superintendent three years ago, discussed how the district has addressed the issues brought forth by the accreditation team. Among them were a lack of curriculum and a lack of collaboration between staff members, both of which have now been remedied.

“In today’s education models, the big thing is teacher collaboration,” she noted. “Teachers spend all day with students and they don’t often have many other adults to talk to. They need to be able talk to each other to help solve problems in the classroom.”

In order to build a more collaborative environment for teachers following the accreditation review, each teacher now has a collaboration and preparation period during the day to talk about issues that are happening in the classrooms. Core teachers and special subject teachers each meet amongst themselves during these periods, as well as meeting once a week with colleagues separated by age groups.

Bria also addressed questions regarding the district’s placement of students transferring into the school. Because each state is responsible for assigning specific subjects to certain grade levels, some students come into GCS having already learned some material.

“Keep in mind, every state sets their own essential skills — the most important things that should be taught,” she explained. “Each state determines what level a specific subject is taught. Often, students come here and they’ve already had a certain class because it was mandated by their state at a different grade level. It’s our responsibility to make sure that those kids take the other levels because our state requires that those particular classes are taken in order to graduate. We want them to graduate on time.”

According to administrators, the district also has procedures in place for educating and supporting students with special needs, whether they are academic or behavioral in nature. In response to two separate questions, Rommel explained that an Individual Education Plan (IEP) is developed for each student with special needs, along with a Behavioral Intervention Plan (BIP) should one be required.

The IEPs, developed by specialists and school staff along with a child’s parents, are required to be followed by all school personnel in order to ensure that the student and his or her peers remains safe and able to take full advantage of the learning environment.

Along with questions about academics, parents also stated some concerns about the safety of their children in the school.

“The first thing I do every morning is walk the campus,” said Rowland, who came to GCS from a much larger school in Texas. “We try to make ourselves as visible as possible, all of us administrators. I have six rangers on call, and they can be on this campus within minutes.”

In addition to having procedures in place for incidents among students, administration said GCS is also prepared for the possibility of an active shooter entering the campus. During the last year, the school has practiced several lockdown drills.

Shawn Shields, a 13-year veteran of the Arizona Department of Public Safety (DPS), added that his department has been much more involved with the current school administration than in the past.

“We have maps of the school, we have taken rangers and done active shooter training inside the school,” he said. “The rangers, the DPS, the county — we all train together. We will lock the school down, we will sweep it and we will get your kids out.”

Andrew Aldaz, who worked 30 years for the school district before retiring in 2011, addressed the need for more communication and relationship-building between GCS and the other towns served by the district.

“It’s really important for the school to start coming out here. More parents need to know what’s going on at the school,” he said. “A lot of them didn’t even know that we weren’t accredited. Some of them don’t know what accreditation is. This is why we need them to come to us. I’ve been working with Mr. Rowland on bridging the gap between the school and the communities of Tusayan and Valle.”