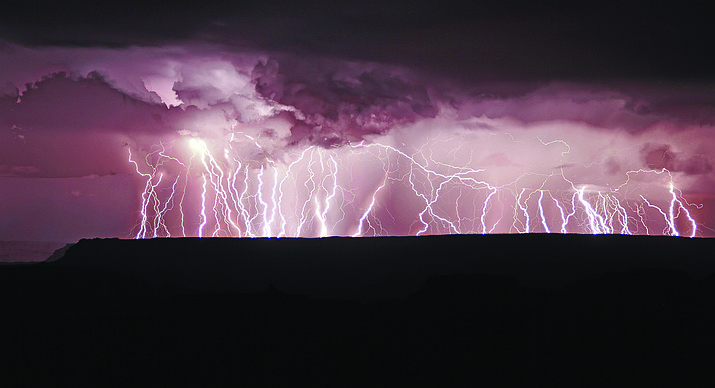 GRAND CANYON, Ariz. — August was cooler and wetter than normal for most of northern Arizona, with several locations among the wettest Augusts on record.

According to data collected from the National Weather Service in Bellemont, Williams recorded 4.8 inches of rain in August as compared to the norm of 3.41, which put it at the 21st wettest month on record, however, many areas in northern Arizona produced record setting precipitation.

A thunderstorm laden August doubled the normal amount of precipitation to Flagstaff and elevated the area’s monsoon season into one for the record books. Flagstaff recorded its fourth wettest August to date with 6.34 inches of precipitation 204 percent of the norm of 3.11 inches. The record for August is 8.77 inches which was set in 1904.

“I would say the majority of northern Arizona was above normal for August,” said National Weather Service Bellemont Forecaster Megan Schwitzer.

Schwitzer said precipitation can vary dramatically from one location to another during monsoon season. She said some areas were near or below normal but on the whole most places were above average.

“It really depends on when we get the monsoon circulation and how the moisture flows into Arizona,” Schwitzer said. “As long as we don’t have anything to disrupt that then we’ll continue to see thunderstorm activity just about every day.”

Schwitzer said the area did not receive as much precipitation in July because of low pressure systems that flowed through the western United States that disrupted the monsoon flow.

“It’s very different than the winter time when we have frontal systems affecting the precipitation,” Schwitzer said. “It’s all driven by pockets of heating, so daytime heating drives instability in the atmosphere so we end up with scattered popcorn type thunderstorms every and wherever those occur we see the severe rain.”

Flagstaff also had record setting rainfall for two days in August. Flagstaff Pulliam Airport recorded 1.41 inches Aug. 26, which broke the 1984 record of 0.98 inches. On Aug. 27, 0.94 inches of rain fell at Flagstaff Airport, breaking the record of 0.9 inches in 2007.

Flash flooding was also reported Aug. 4 in the Paria Canyon area near Lee’s Ferry with water levels in excess of five feet between 11 p.m. and 7 a.m. Aug. 5.