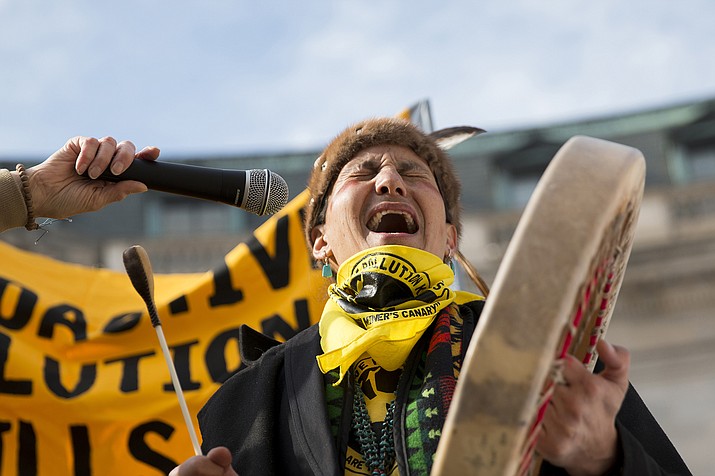 Klee Benally of the Navajo Nation, at a February protest outside the Environmental Protection Agency in Washington. There are an estimated 500 sites on the Navajo Nation contaminated with uranium, some of the thousands in the West. (Photo by Danika Worthington/Cronkite News).

Klee Benally of the Navajo Nation, at a February protest outside the Environmental Protection Agency in Washington. There are an estimated 500 sites on the Navajo Nation contaminated with uranium, some of the thousands in the West.

WASHINGTON —Federal officials took the first step Sept. 2 toward a planned $1 billion cleanup of abandoned uranium mines in and around the Navajo Nation, seeking bids to assess the problem and begin planning the project.

The Environmental Protection Agency expects to use about $85 million for the planning, part of a nearly $1 billion settlement with Kerr-McGee Corp., later Tronox Inc., which operated mines in Arizona and New Mexico.

“This is only one element of a much larger project since 2008,” said Clancy Tenley, the EPA official who is directing the cleanup program in the Navajo Nation. “EPA and five other agencies have invested more than $100 million in cleaning up and assessing abandoned mines on the Navajo Nation.”

EPA on Aug. 31 put out a request for proposals to start planning the cleanup of about 50 former Kerr-McGee mines, the latest step in a years-long effort by tribal and federal officials to clean up more than 500 abandoned mines in the region.

These areas in northeastern Arizona and parts of New Mexico and Utah are peppered with abandoned mines as well as sites filled with mining waste, some with potentially dangerous levels of gamma radiation.

“Although there are 523 mines, over the last several years we’ve worked together with the Navajo Nation to find the worst ones,” Tenley said. “We’ve prioritized these.”

That resulted in a list of 46 mines that are close to homes and have high levels of radiation or are close to water sources. Nine of those sites have already been cleaned up, Tenley said.

The EPA has agreements with 30 companies responsible for the mines, and the Justice Department is funding the assessment and cleanup of the additional 16, Tenley said.

Those are just a fraction of the more than 15,000 mines known to have “uranium occurrence” in 14 Western states. About 75 percent of those are on federal and tribal lands, according to the EPA.

Navajo Nation officials did not return calls seeking comment on the issue, but one tribal environment activist called the problem the result of U.S. policy that “legitimized stealing my land … through mining.”

“The United States created this law saying anyone can mine on public land through this patent system, which gave them permission to stake a claim,” said Leona Morgan, the activist. “If they can prove there could be minerals, then they could mine.”

She was referring to the General Mining Act of 1872, which let settlers mine for specific hard minerals, including uranium, on land managed by federal agencies such as the U.S. Forest Service or the Bureau of Land Management.

Uranium mining in the region grew during the Cold War. Though extraction was banned on the Navajo Nation in 2005, thousands of residents are still dealing with long-term health affects, according to the Southwest Research and Information Center, a nonprofit group that works on the issue.

The EPA plans two workshops before contractors start to develop any assessment proposals. The first was set for Sept. 12 at the Twin Arrows Navajo Casino Resort near Flagstaff and a second is planned Sept. 15 in Crownpoint, New Mexico.

The agency is also looking to hear from firms interested in the work of cleaning the sites, after the initial assessment.

“We’re strategically targeting the places where we can make the biggest difference,” Tenley said. “The work will go on for years. This is a big project.”