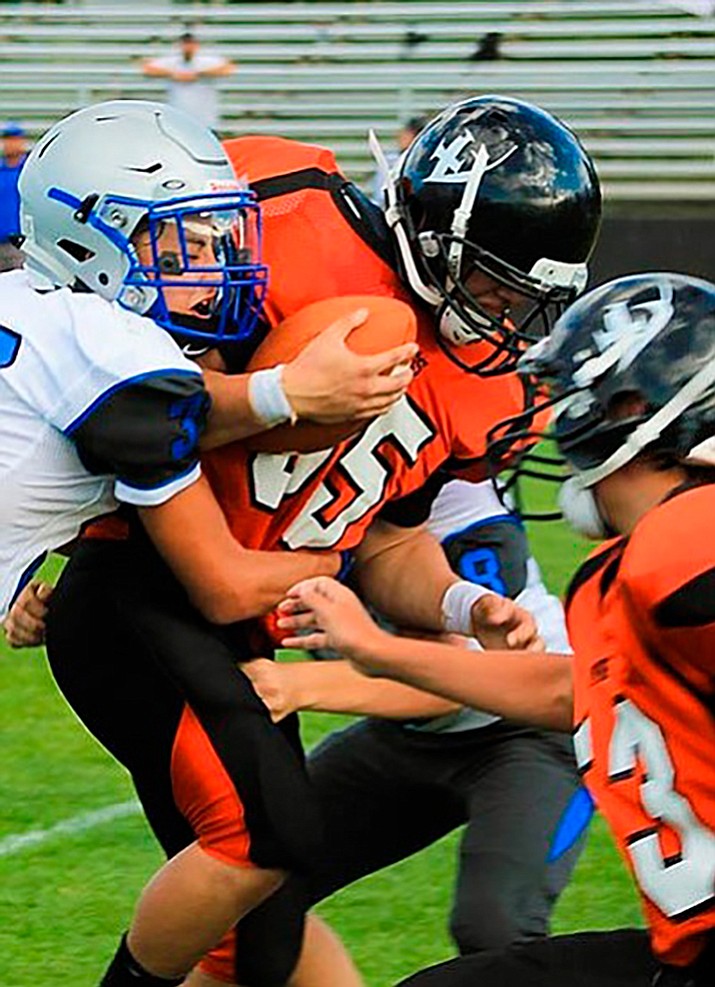 Dorian Ayala breaks through a tackle during the JV game with Bagdad Aug. 30. Wendy Howell/WGCN

The game was the first game of the second season the school has played 8-man football.

"The kids know the offense being in their second year, and you can tell when they were out on the football field they knew what was going on," said Vikings head coach Jeff Brownlee. "Our offense really clicked for us."

Brownlee said despite the lopsided score the Lobos played a tough game. He said the team was composed of some big players who were very physical.

"One of our big concerns as a football team is playing in the heat," Brownlee said. "I think at kickoff time it was about 87 (degrees)."

Brownlee said the team usually practices at temperatures around 70 degrees and heading south early in the season is always tough for the team.

"What hurt us today was that we had two early fumbles, so we didn't jump out to a quick start like I thought we would," Brownlee said. "Those hurt. You have to eliminate those mistakes of turning the ball over."

Despite the turnovers, the Vikings were first on the scoreboard with a 15-yard run by Martin Soria in the first quarter with a follow-up 2-point conversation by Daniel Lopez to move the score 8-0.

The Vikings came out in the third to score again with a 33-yard pass from Soria to Ortiz who followed up with a three-yard pass for the conversion points to bring the Vikings up 36-0.

Entering the fourth quarter, freshman Chance Pearson completed a 16-yard run to bring the team up 42-0.

The Lobos finally got on the scoreboard in the fourth quarter with a 30-yard touchdown pass to bring the final score 42-6.

Brownlee said overall he was pleased with the play of the team.

"Our kids played well through the heat," he said. "We did have some fatigue and dehydration issues but we have such depth we were about to get some starters some rest, hydrated and sent back in."

He said last year the team typically had eight to 10 penalties a game and during the game with Hayden the team only had three penalties.

He said he was also pleased with the team's offense. Brownlee noted the strong play by Soria.

"Martin was a double threat either to pass or run," Brownlee said. "His game really opened up and this is what we expect from this offense."

Brownlee said he is hoping to capitalize on both running and throwing from Soria. Soria ran for 131 yards and threw for 244 yards during the game.

"You can't ask for anything better out of quarterback than that," he said.

Brownlee said the defense did very well which was apparent by the low scoring by the Lobos.

"We held them scoreless until the very last play of the game," Brownlee said. "I was hoping we were going to hold them to zero but they got on in at the very end on the last play."

"He had a very good defensive game," Brownlee said. "All are solid linebackers for us and they flow and move to the ball very well."

Brownlee said the win motivated the team and the coaches hope the momentum of the game will carry them to the game with Bagdad Sept. 2.

"Bagdad is number one in the state," he said. "They've blown out two teams this season. We feel that we match up with them really well and we're excited to go down and play them."

The Vikings face Bagdad Sept. 2 in Bagdad and face Rough Rock for their first home game Sept. 8 at 7 p.m.