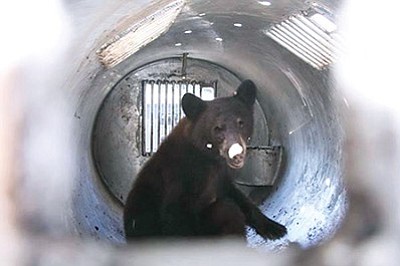 Captured by Arizona Game and Fish after she was found foraging trash cans and following hikers, ‘Lemmon’ is the newest addition at the drive through wildlife park. Photo/AZGFD

WILLIAMS, Ariz. - With an increase in human population and city limits, there's a high chance of having an encounter with wild animals.

On Aug. 26, the Arizona Game and Fish Department AZGFD) captured a black bear on Mt. Lemmon in Tucson that was posing a public safety risk. The bear had lost its fear of people and was sighted on Mt. Lemmon eight times since May.  The bear reportedly followed hikers, tried to get into homes, was spotted salvaging through trash cans and had no fear of humans. In cases like this, usually the bear would be euthanized.

After capturing the young female, Game and Fish transported her to Bearizona Wildlife Park in Williams.

Bearizona's newest addition, named "Lemmon" after Mt. Lemmon in Tucson, will stay in mandatory quarantine for 30 days before being released into the cub exhibit.

"We are fortunate to have found a new home for her," said Raul Vega, region 5 supervisor for AZGFD. "That rarely is possible with common species like black bears. So this story has a happy ending, but it could have gone another way. Young bears that seem dangerous grow up to be large bears that are aggressive."

Dave O'Connell, lead animal trainer at Bearizona, said when the situation is right, Bearizona works with Game and Fish to take in wild bears.

"Rescue bears are from lots of different areas,"O'Connell said. "We have bears from Pinetop, Prescott, Tucson and California even. Most of our bears at Bearizona are rescue."

In the past, Bearizona allowed its captive bears to breed, however, in the last year the park began implementing birth control methods in its bear population.

"This past year we enacted a birth control plan for all of our bears. Cubby and Rizzo, our current cubs, will very likely be the last bear cubs born at the Park. We do this so we are able to rescue bears out of the wild when possible. Unfortunately we won't be able to rescue every bear in need, but we are moving in a direction to rescue when the situation works for all parties involved," said Sean Casey, Bearizona's owner.

According to O'Connell, the park takes in rescue bears because of the opportunity it allows for public education on safely interacting with wildlife and the effects litter and other trash have on wild animals.

"One of the reasons for having Lemmon (at Bearizona) is that we can now educate the public about what to do when there is a bear in your neighborhood," he said. "People can see first-hand that it is important that we reduce, reuse, recycle - clean up our world, because with human populations growing we're starting to move into where bears live. We are not just taking bears out of the wild to house them and show them off. It's important to educate the public about what's going on."

O'Connell said Lemmon was healthy when she arrived at Bearizona Aug. 27.

"She is plenty healthy," he said. "She's a young bear. A little over a year old, probably around 100 pounds - so she's a smaller bear. We're hoping to fit her in with some of our younger bears we have here at Bearizona and (we'll) let her grow up with them."

When wild bears arrive at Bearizona they are not handled immediately. They are closely monitored during the 30 day quarantine, with everything from their feces to their daily behaviors tracked.

"The most important thing we do when we first get our animals is we learn as much as we can about them," O'Connell said. "What their favorite foods are and things that will help us work with Lemmon throughout the rest of her life."

After a month in quarantine, Bearizona staff will introduce her to the bears she will eventually live with.

"Coming from a wild place or out in the wild to captivity is a big change to an animal," O'Connell said. "We want to make sure it's as smooth as we can make it."

Over 60 percent of bears at Bearizona are rescue bears.