More than meets the eye: the heart of volunteers and partners
Grand Canyon High School senior, Kyla Pearce, takes a close look at what it means to volunteer during two week trip to Costa Rica 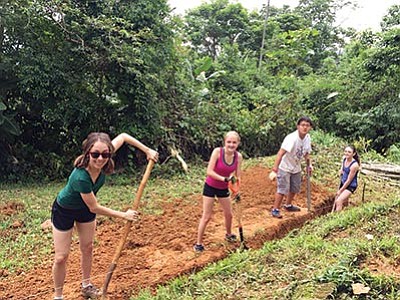 Kyla Pearce (center) and fellow volunteers dig a trench for bathroom piping in the village of La Alfombra in Costa Rica. Photo/courtesy of Kyla Pearce

GRAND CANYON, Ariz. - In a country where the majority of people live comfortably in the middle class, we quite often become so accustomed to our own cultural norms that we become ignorant of the rest of the world.

While this can be an issue when it comes to our intercultural education and global awareness, it can also be used as a foundation for inspiring young people to leave the country and become global citizens.

I was presented with such an opportunity this summer through Walking Tree Travel, a company who leads high school groups in countries around the world on service trips, learning adventures and leadership challenges. My destination was Costa Rica, where I would spend fifteen unforgettable days staying in a host village, carrying out a group service project and learning about the vibrant Costa Rican culture.

During our time in Costa Rica we stayed on a family-run organic farm, hiked to a breathtaking waterfall and explored the jungle that makes up Parque Nacional Manuel Antonio. We spent the majority of our time in La Alfombra, a small village nestled high in the mountains.

In our host village, which had around 300 residents, we were placed with host families and spent the week immersing ourselves in the country's culture. During the day, our group would gather at the local church where we worked to construct a handicap accessible restroom. While the work was tiring, it was made fun through songs, games and jokes. In the evenings, we would retire to our host homes, where we would pass time communicating with our Spanish-speaking families, playing games, eating delicious food, watching native dances and enjoying muddy games of soccer.

By the end of the week, we were rewarded with a finished (and working) restroom. It was incredible to look back on what we had achieved in only eight days.

The end of our time in La Alfombra also brought the sorrow of leaving the people we had come to call family. This sadness, however, was also a wonderful reminder of the relationships we had formed with our families and many friends. Even though they had never met us before and did not speak our language, they opened their homes, and their hearts, to us with love and understanding.

Allie, one of my fellow travelers, said "we were able to laugh with her [our host mother]. Even without being able to speak, we were able to connect." And although we were leaving, each and every one of us knew we had built relationships that would last a lifetime and had experiences that would change the very basis of who we were.

As we reached our final days in country, we had the opportunity to reflect on our experiences. One thing that stuck out to me the most, was how much Costa Ricans value family.

"I couldn't tell if someone had known another person for ten years or if they'd just met," said Coco, another fellow traveler on the trip.

Every person we met was not only kind, but genuinely wanted us to be happy in their home. We compared this to our own country, where, as stated by our leader Suzie, "it takes time, dedication, and work to create relationships."

We were also amazed by the Costa Rican way of life.

"We live in a very materialistic society," said Allie Smith. "What we value most is materialism. They don't have that here. They have those things that bring them together like soccer and family."

One thing that also impacted me was something my host mother said to me when we were first brought to her home.

"Es una casa pobre, pero es llena de amor," she said, which means, "It is a poor house, but it is full of love."

This alone gave me a new perspective on life as a whole and changed the way I view the world. Each and every traveler, including myself, came out of the experience with a broader understanding of culture and what it means to be a global citizen.

"The more I travel, the more I realize we are 99 percent the same and the differences between us are so small," our trip leader said, "We realize how similar people really are."

I encourage every young person to step outside their comfort zone and create an opportunity to travel and see the world. For it is you and your experiences, just like mine this summer, that will create the global citizens who will lead us into our future.