Out of the past: Arabians at Hat Ranch 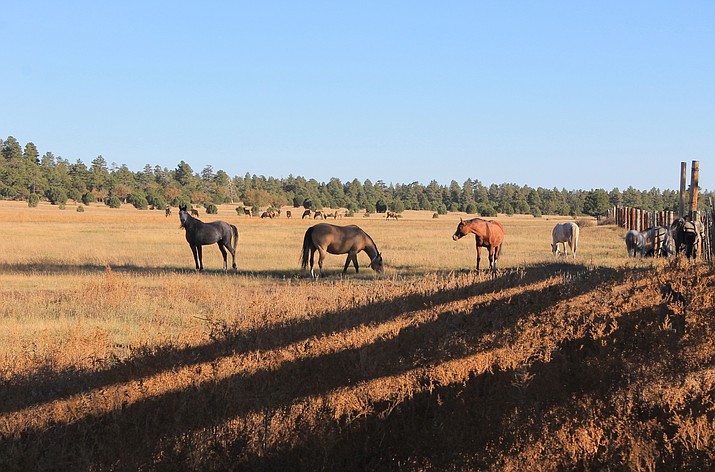 A herd of Arabian horses grazes at Hat Ranch Oct. 23 while a herd of Elk share the same pasture in the distance.

WILLIAMS, Ariz. — A herd of 30 Arabian horses graze in an expansive pasture behind the ranch. In the distance is a herd of elk, heads down and at peace, as if sharing pastureland with an intricately bred lineage of horses from the middle east is commonplace.

When Isabella Greenway passed away in 1953, the Quarter Circle Double X Ranch passed on to her son, Jack Greenway. Few politicians, dignitaries or presidential hopefuls came to the ranch anymore and eventually Jack put the ranch up for sale.

Bazy started breeding Arabian horses in the late 1930s and founded the Al-Marah Arabian Horse Farm in Tucson, Arizona in 1942. The daughter of a U.S. congresswoman and a U.S. Senator, Bazy McCormick grew up in Illinois in a family interested in the women’s suffrage movement, ranching, and newspapers. Her ancestors attained prominence and fortune starting with the invention of the McCormick Reaper, the machine that revolutionized agriculture and established the modern grain trade.

Bazy’s father died when she was very young and when her mother remarried the family moved to the Southwest. Bazy’s life changed forever when her mother purchased a little grey mare after watching a polo match in Roswell, New Mexico. Bazy’s mother, Ruth Hanna McCormick noticed the strength and stamina in the horse and asked the coach to sell her the horse to keep Bazy company. 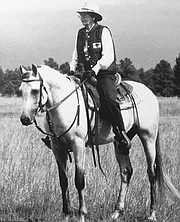 Bazy Tankersley rides one of her beloved Arabian horses through the pastures of Hat Ranch in the early 1990s.

“I never even tired Little Joe,” said Bazy to biographer Mary Jane Parkinson in her book … And Ride Away Singing. “Through her I came to appreciate many qualities of the Arabian breed and as we cantered the dusty roads of Albuquerque, I made a vow to myself to someday own not just one Arabian, but a whole field of Arabians.”

With Little Joe, Bazy realized what the relationship with a horse could be.

“Those early years, from ages ten to 12, were solitary years for me,” she said in her biography. “She (Little Joe) was the first horse in my acquaintance who would actually trot up to the gate when she saw me coming, always eager to go on a ride and not looking for her dinner.”

While at boarding school she concentrated on improving her riding skills with a Thoroughbred horse she was given.

She spent the end of 1930s devouring as much information as she could find about Arabians and breeding horses. Bazy made her first purchased of an Arabian in 1940 and brought it to her mother’s ranch in southern Colorado and began her path to breeding Arabians.

Bazy married Peter Miller shortly after and they purchased a 40-acre ranch on River Road in Tucson and brought Bazy’s Arabians. They decided to name their Arabian breeding operation Al-Marah which in Arabic means “a garden-like oasis” which is what Bazy thought the lush green irrigated Tucson ranch looked like. 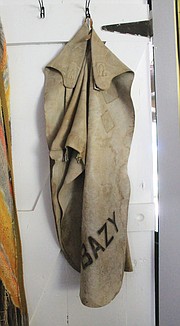 The chaps of Bazy Tankersley are one of many items left at Hat Ranch for visitors to explore.

Bazy and Peter returned to Bazy’s mother’s ranch in Colorado to work the cattle operation after her mother died and they discovered how tough the Arabians were when they began using them for ranch work. She found they adapted quickly to being mountain horses.

After the war ended, she, Peter and their two children moved to Illinois to work in the newspaper business with other family members. Peter began looking to buy his own newspaper and in 1950 Bazy took on a new job as editor of the Washington Times-Herald. “My uncle just assumed that anyone with McCormick blood could run a newspaper,” she said.

The time in Illinois was difficult as she and her uncle parted ways and her marriage dissolved at the same time.

She then married Garvin Tankersley and had two more children. They purchased three farms in Montgomery County, Maryland where her Al-Marah operation grew to become the largest Arabian farm in the United States by 1957.

From her college studies she believed that with a small breeding program, she didn’t need to own a stallion. But as she grew her own breeding business she realized she wanted a field full of Arabians that showed uniformity so she purchase her first stallion Indraff from a North Manchester farm.

By the end of the 1950s, Bazy had bred about 250 Arabians and had become the largest private breeder of Arabian horses.

Around 1970, Bazy and her family returned to the Tucson desert which she loved. After the sale of the Maryland property she realized she needed a place to escape the heat of the Tucson summers. She began searching in northern Arizona and found the historic 2,400-acre ranch near Williams that belonged to Jack Greenway whose mother was Isabella.

Bazy purchased the property, renamed it Hat Ranch and ranched 112,000 acres of public land for many years. However, she felt that the overpopulation of elk was impacting the cattle and discontinued the lease in the early 1990s.

She thought Hat Ranch was a good place for young stock to grow up. She believed the mountain grass was excellent for maturing horses.

“They just run out on the range and live like horses,” she said.

Bazy said the younger horses thrived at the ranch and were easier to break. She said they were friendlier and were not exposed to as many diseases as the horses in the city. They brought the horses back to Tucson in the winter.

As Bazy began spending more time at Hat Ranch, she opened up her doors to conservationists and held “think tank” type of workshops at the facility for the Arabian Horse Association. She also became interested in straw bale house construction and hosted politicians, conservation leaders and academics to discuss environmental and conservation issues.

On Feb. 5, 2013 Tankersley died from Parkinson’s disease. She had downsized her ranch from 350 horses to about 150 before her death. Her son, Mark Miller took most of the remaining stock and moved the ranch to Claremont, Florida.

In a 2014 article in Modern Arabian Horse magazine, he said continuing the tradition of breeding exceptional Arabian horses is both a privilege and an obligation.

Vintage quilts are found throughout the rustic ranch.

“This herd doesn’t just represent 70-some years of Al-Marah history. It is the core herd of the Arabian horse, first gathered in the desert by Abbas Pasha 200 years ago,” he said.

Miller plans to continue in the tradition of his mother in raising exceptional Arabians by breeding them to be companion, work and family horses, not just horses to look at.

The Tucson Al-Marah Ranch was donated to the University of Arizona’s College of Agriculture as a working ranch. The Hat Ranch was given to the Grand Canyon Trust to prevent further development and to conserve the ranch in its traditional ways.

Bazy’s longtime employee, Jerry Hamilton continues to manage the Hat Ranch for Miller as a home for young horses bred by Al-Marah. While a portion of the ranch is being operated as a guest ranch to share the experience of a working horse ranch with visitors.

According to biographer Parkinson, at heart Bazy was an architect and practical rancher who wanted her horses as sound and serviceable as any structure she may design and be able to work cattle so well that they show up traditional cowboy mounts.