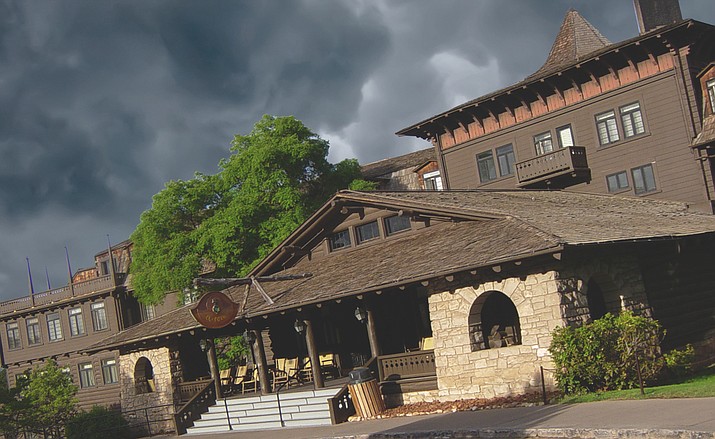 The El Tovar Hotel, opened in 1905, is reported home to several other-worldly guests.

GRAND CANYON, Ariz. — The El Tovar Hotel sits perched atop a bluff just 20 feet from the South Rim. It was a pinnacle of luxury in the midst of an unforgiving wilderness when it opened in 1905, and has seen hundreds of thousands of visitors in the century since.

Did some of them check in permanently?

Old hotels have long been the subjects of slumber party stories and ghost hunting expeditions, and the El Tovar Hotel is no exception. Guest and staff experiences alike have shaped the historic property into one of the Grand Canyon’s most intriguing destinations.

Employees and guests alike have noted strange occurrences at the hotel over the decades – a painting that followers the viewer wherever they go, a phantom wandering down the front stairs and across the property before disappearing, and a friendly, well-dressed gentleman welcoming guests to a holiday celebration on the third floor.

Exiting the building through the front doors and heading slightly left across the circle drive to a small stand of vegetation will reward explorers with one of the hotel’s signature mysteries: a small, flat gravestone engraved simply “Pirl A. Ward: 1879-1934.”

Speculation about who Pirl was varies. Stories handed down through word of mouth indicated that Pirl was a cowboy passing through the area. Other stories identify her as one of the famous “Harvey girls,” hostesses unique to Fred Harvey’s hotels, who lived, worked and died on the property. Whoever he or she is, visitors and staff members at El Tovar have reported seeing a black, caped figure leave the hotel’s front stairs, hover near the grave, then wander off behind Hopi House before disappearing.

Another well-known specter is that of an older gentleman said to be Fred Harvey himself. Although Harvey died in 1901, four years before the hotel opened to the public, many visitors have reported being invited to the hotel’s annual holiday celebration on the third floor.

Guests have also reported unique experiences themselves, such as that of a couple visiting from New Jersey. Mark Griffith said his wife experienced a presence in their room – one who pulled on her clothing in the middle of the night. Another couple, visiting from Los Angeles, walked past their television to see the face of an old man with a gray beard peering back at them.

While being one of the most easily accessible haunted locations in the Grand Canyon, El Tovar is not the only location to spook visitors. Maricopa Point and Phantom Ranch each have stories of workers continuing their labor long after their last shift.

Those up for a rigorous hike can travel to the isolated canyon between Temple and Chuar Buttes, the sight of a deadly 1956 mid-air collison and subsequent crashes of two airplanes high above. Hikers have reported eerie lights and ghostly figures in the vicinity of the aptly-named Crash Canyon since the accident that claimed the lives of all 128 passengers and crew.