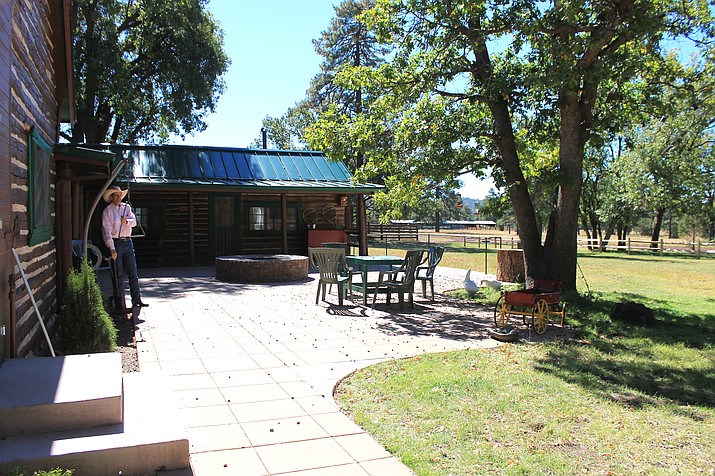 The Historic Hat Ranch in Williams has a rich history. Arizona’s first U.S. congresswoman Isabella Greenway and well-known Arabian horse breeder Ruth “Bazy” Tankersley owned the ranch at different times trhoughout its history. Above: John Moore rings the triangle as one of the new proprietors of the ranch.

WILLIAMS Ariz. — The road winds in and out of thin stands of Ponderosa Pines and showy yellow oak trees across a landscape dotted with grazing cattle and rusty barb-wire fences. Ahead lies the ranch, unassuming in most ways, sprawling across the landscape with commanding views of Bill Williams Mountain to the east and the rolling grasslands and pinyon-juniper forests to the west.

Many residents of Williams are unaware of the beautiful ranch that lies within a stone’s throw of their town, and fewer yet know of the rich history that lies between the walls and among the rafters of the rustic ranch.

Now run under a conservation trust, the ranch is being operated as a bed and breakfast but has stayed true to its fascinating past. Now known as Hat Ranch, the ranch was built in the early 1900s and has also been called Quarter Circle Double X Ranch and the Greenway Ranch, as it passed through the hands of two remarkable women, Isabella Greenway and Ruth “Bazy” Tankersley.

Many Arizonans know of Greenway as the first U.S. congresswoman from Arizona and close friend of Eleanor Roosevelt. But Isabella was also a charismatic business woman and philanthropist and played numerous roles in the development of Arizona during the Great Depression, which included restoring the economy, developing the copper industry and creating jobs for veterans.

Isabella Greenway during her tenure as a U.S. Representative.

Greenway was born in Boone County, Kentucky, but spent much of her youth in rural North Dakota, where her family became close to Theodore Roosevelt. Although already rising in politics in Washington, Roosevelt had come to North Dakota for adventure and befriended Greenway’s father Til Selmes, who was doing the same. The Selmes family divided their time between St. Paul and North Dakota and often went on treks in the Badlands with Roosevelt.

According to the book “Isabella Greenway: An Enterprising Woman,” by Kristie Miller, Roosevelt admired the Selmes family for their dedication to the frontier lifestyle and their similar intellectual interests.

Following her father’s death, Isabella moved to New York to live with her uncle Frank Cutcheon and attend the elite Miss Chapin’s School, where she was introduced to Theodore Roosevelt’s niece, Eleanor Roosevelt. Eleanor was a year older but struck up a friendship with Isabella and they spent summers going back and forth to from the Roosevelt home and her uncle’s farm on Long Island.

Eleanor and Isabella stayed close following their schooling and both became engaged in 1903. Eleanor fell for her distant cousin Franklin Delano Roosevelt in 1903, while Isabella grew close to one of Theodore Roosevelt’s Roughriders, Bob Ferguson. Both married in 1905 with Isabella being a bridesmaid at Eleanor’s wedding.

Isabella’s marriage to Bob was difficult as he spent the majority of it sick with tuberculosis, which likely developed during his time in Cuba with the Roughriders. The couple had two children, and in 1910 the family moved to Silver City, NM where Bob hoped to recover.

Isabella’s foray into politics began shortly after the family’s arrival in Silver City. During that time, Franklin Roosevelt was elected to the New York State legislature and Theodore Roosevelt was making his second run at the White House. Bob, along with family friend and fellow Roughrider John Greenway, encouraged Isabella to get involved with the campaign. Despite losing the bid, Isabella enjoyed her time touring with Roosevelt and she became hooked on politics.

Many photos and books from Isabella Greenway’s life are scattered around the ranch.

After the United States declared war on Germany in 1917, Isabella’s first official position was to head the Women’s Land Army for the State of New Mexico, where she organized women to do farm work for men who were called to the battlefields. She then was asked to chair the Land Service Committee to increase food production and was selected to the State Labor and Reconstruction Board.

Bob died in 1922 and Isabella married John Greenway, a prominent figure in Arizona politics at the time. They moved to Ajo, where he operated a copper mine. They had one child, but their marriage was short-lived when Greenway died following gallstone surgery in 1926.

With Isabella’s experiences and connections, many said she should carry on Greenway’s work. She began spending more time in Tucson and wanted to do more work to help veterans. She founded a furniture factory called the Arizona Hut to provide productive employment for veterans.

With the Arizona Hut going strong, Isabella decided to purchase a ranch in northern Arizona in 1927. She was looking for relief from the harsh southern summers and a business opportunity for her son, Bob. She found the Quarter Circle Double X Ranch six miles west of the town of Williams.

Many discouraged her from making the purchase, but Isabella began spending summers at her new ranch as the cattle operation took off.

With a home still in Tucson, she stay involved with politics and made a name for herself by serving on several charity boards, working on fundraisers and becoming a trustee of Tucson desert sanitarium.

In 1928 she was named the Arizona Democratic National Committeewoman. Some thought her selection was honorary, a tribute to late husband, but she proved a hard worker.

She travelled the state speaking out for Democratic presidential candidate Al Smith. Miller stated in her book that Isabella was popular and she proved to the state that women were interested in partisan activity. Despite her efforts the state, as well as the rest of the country, went with Republican Herbert Hoover.

Franklin D. Roosevelt and several U.S. Senators and Representives meet at the Quarter Circle Double X Ranch in Williams during Roosevelt’s campaign for president in Sept. 1932.

In 1932, Franklin Roosevelt openly declared his candidacy and Eleanor asked if Isabella would take charge of Franklin’s campaign in Arizona. During a whistle-stop tour of seventeen western states, Franklin Roosevelt stopped to visit Williams at the request of Isabella and stayed at her Quarter Circle Double X Ranch. The stop-off created tremendous excitement. Isabella housed more than one hundred guests for a lunch at the ranch with many more staying on overnight.

The Prescott Evening Courier’s September 26, 1932 edition was covered in headlines about the campaign stop. The newspaper stated that over 60,000 residents lined the streets to hear Roosevelt speak on his first stop in Phoenix. Roosevelt then appeared at Wickenburg, Glendale, Skull Valley, Prescott, Ash Fork and Williams.

Long before sunrise, ranchers, lumbermen and townsfolk for a hundred miles around began arriving at the Quarter Circle Double X Ranch. According to the Sept. 30, 1932 edition of the Williams News, an estimated 1,000 people were on the train platform to greet Roosevelt when he arrived in Williams.

Cars had been run up on the platform to receive the guest for the special train, and a gang plank was laid from the observation car in which the governor rode to a waiting car. The paper stated “Mr. Roosevelt looked the picture of health and vigor despite his inform limb and made his way down the gang plank unaided.” Several motion picture crews and a small army of newspaper reporters rode on the train and six special telegraphic key boards had been installed at the Western Union telegraph station for their use.

At the ranch, Roosevelt met with several Arizona politicians, including Arizona congressman Lewis L. Douglas, Governor George Hunt, and U.S. Senator Carl Hayden, who introduced him to over 3,000 waiting supporters the following day at the ranch.

The effects of the Great Depression motivated Isabella to take more action in Arizona. She resigned as the National Committeewoman upon hearing of Arizona’s pending vacancy in the U.S. House of Representatives. Isabella represented Arizona at Roosevelt’s inauguration and declared her intent to run for the House. Greenway swept to victory and was sworn in as Arizona’s sole U.S. Representative on Jan. 3, 1934. She served until 1937.

During her years in politics, she was instrumental in obtaining protection for the U.S. copper industry from foreign interests, whose low prices had forced the shutdown of some American mines. She worked to secure public health benefits for transient families, fought cutbacks in veterans’ benefits, and, with the aid of New Deal funds, saw that homes were found for destitute families in Phoenix, Mesa and Casa Grande.

By 1936 Isabella was worn out and decided not to go for a third congressional term in favor of going home to Tucson. She married Harry 0. King in 1939, and the couple made their home in New York City, returning to Tucson for occasional visits with her children. During one of those visits in 1953, Isabella Greenway King died on December 18 at the age of 67.

Quarter Circle Double X Ranch was kept in the family and run by Jack Greenway for many years. During that time, many politicians and friends of the family stayed at the ranch, including former President George. W. Bush when he was a young student at Yale. Bush’s father, George H.W. Bush, had been a classmate and friend of Jack Greenway, and asked the Greenways if the younger Bush could stay on the ranch for a summer.

As reported in his book “First Son,” Bill Minutaglio said Bush stayed at the ranch during the summer of 1963 to build fences and work for the ranch foreman. He shared a small room in one of the ranch’s two cottages with Martha Greenway’s son, Peter Neumann, who said he and Bush spent most evenings enjoying an old-fashioned atmosphere in front of the fireplace but would occasionally go into Williams where they “hung around and raised hell. We went to a movie, hung around, tried to get served illegally in the local bar, whatever.”

See part two of the Historic Hat Ranch and the story of Bazy Tankersley in next week’s edition of the Williams News.