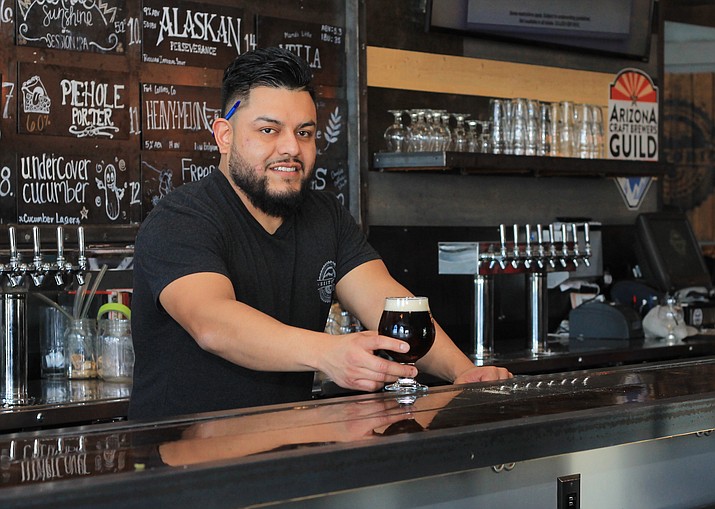 Bartender Luis Alvarado serves up a beer at the Historic Brewing Co. in Williams. The tavern was the only brewery in Arizona to bring home an award at the Great American Beer Festival in Denver Oct. 6 - 8.

The 2016 competition winners were selected by an international panel of 264 expert judges from the record number of 7,227 entries, plus 88 Pro-Am entries, received from 1,752 U.S. breweries. The top three winners in the competition’s 96 beer-style categories were announced October 8 at the awards ceremony held at the Colorado Convention Center in Denver, Colorado.

The Avant-Chard is one of the first beers in HBC’s Barrel-to-Bottle Series that began a little over one year ago when brewer Kristen Ewer from the well-respected Dogfish Head Brewery in Delaware joined the Historic lineup. The award-winning beer was the brainchild of both Ewer and brewer Zack Stoll, a talent that has been with the company since its infancy. The Barrel-to-Bottle Series is focused on highly specialized, small batch, barrel-aged beers and is one of the first of its kind in Arizona.

Historic Brewing Company, a family-owned and operated craft brewery based in Flagstaff, opened in the Fall of 2013. They now have three remote taproom locations throughout Northern Arizona called Historic Barrel + Bottle House (Flagstaff, Williams, and Sedona). Their mission is to make the highest quality products, provide unparalleled customer experience and craft disruptive history of the beer industry alongside its consumers.

In 2015, there were four winners from Arizona: BJ’s Beaver Street in Flagstaff and Brewhouse in Chandler took home gold medals, while Tucson’s Barrio Brewing and Huss Brewing in Tempe won bronze medals.

During the festival there were 780 breweries in the festival hall. They served 3,800 beers and had approximately 60,000 people attending.

There were 96 style categories judged, plus a Pro-Am competition. 286 total medals were awarded by 264 judges from 12 countries. The average number of competition beers submitted for each category was 75. The category with highest number of entries was American-Style India Pale Ale with 312.