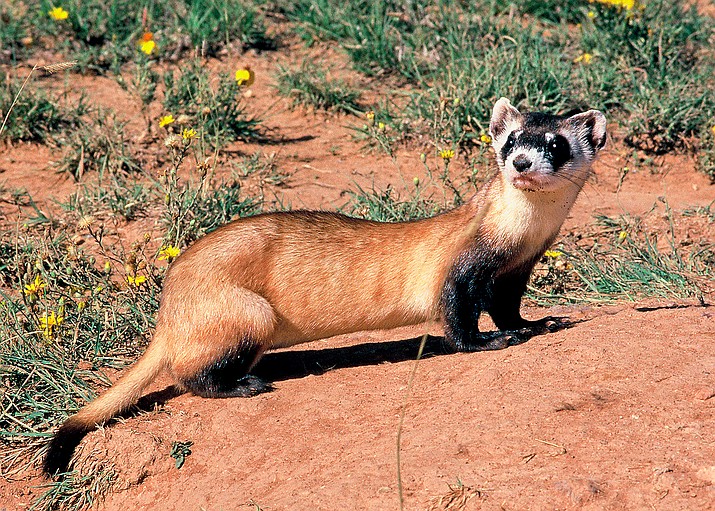 A Black-footed ferret responds to researchers. The species was thought to be extinct until a small colony of ferrets was discovered in Wyoming in 1981.

SELIGMAN, Ariz. — Arizona’s endangered black-footed ferret population celebrated the 20th anniversary of its reintroduction to Arizona with the release of more animals into a new privately-owned reintroduction area. Through a new Safe Harbor Agreement, the Double O Ranch outside of Seligman yesterday became the third reintroduction site in Arizona.

“This release was made possible by a Safe Harbor Agreement, a newer conservation option that aims to enlist the help of non-federal landowners to conserve species. We hope our new partnership with the Double O Ranch will lead to the establishment of Arizona’s third population and contribute to national recovery goals,” said Jennifer Cordova, the Arizona Game and Fish Department’s black-footed ferret program supervisor.

The species was thought to be extinct until a small colony of ferrets was discovered in Wyoming in 1981. Disease outbreaks reduced this population to about 18 individuals, which were captured to begin a captive breeding program to save the species. Before reintroduction, the last black-footed ferret in Arizona was found in 1931 in an area between Williams and Flagstaff.

The descendants of the original 18 ferrets have now been introduced into reintroduction sites across the west, including the Aubrey Valley outside of Seligman, Ariz. In 2008, Aubrey Valley was declared a successful reintroduction site by the U.S. Fish and Wildlife Service as the population had become self-sustaining and no longer required augmentation.

Today, biologists estimate there are a minimum of 800 to 1,000 individual ferrets living in the wild.

While they resemble domestic pet ferrets, black-footed ferrets are a different species and are the only ferret native to North America. They can grow to be up to two-feet long and can weigh up to three pounds. One ferret can give birth to three to five kits each year.