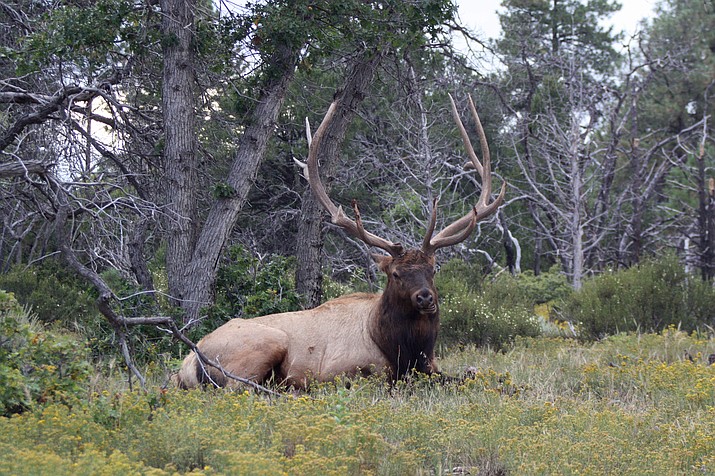 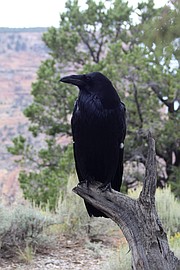 Ravens are drawn to areas where visitors have food.

GRAND CANYON, Ariz. — Miles of the multi-colored canyon walls stretching as far as the eye can see are easily the most sought-after views at Grand Canyon National Park (GCNP), followed closely by sightings nearly as ubiquitous — wildlife.

Elk, deer and mountain lions roam freely across the lands in and around the park, along with their less-majestic-but-cute counterparts like squirrels, lizards and chipmunks. While these creatures make for great photo opportunities, it’s important to remember that wild animals can still be dangerous.

“The number one danger here at the park is aggression in the elk and deer,” said Greg Holm, wildlife program manager for the park. “They aren’t always aggressive, but when visitors get really close to them, there’s potential for a bad situation.”

Fall is rutting, or mating, season for elks. Bull elks will attempt to mate with females during this time, as well as protect their mates and territory from other male elks in the area. This can cause the bull elks to become extremely aggressive. Guests wanting to photograph the animals may cause them to attack, or they may get caught in a natural interaction between two bull elks.

Holm said that that visitors are advised to stay back at least 100 feet from the elks, and to never approach or feed them.

Groups of congregating elk can also pose an indirect danger to visitors as well: traffic jams.

The urge to stop a vehicle in the middle of the road or pull off to the side to photograph the animals can block roadways for upwards of 30 minutes, Holm said, although he pointed out that he has not experienced any bad traffic accidents due to the jams.

“It creates a very unsafe situation,” he said. “Both for the people and the animals.”

According to Holm, collision with vehicles is the biggest threat to the park’s larger wildlife. Visitors leaving the park just after sunset or arriving in the early morning hours before dawn aren’t always able to see the animals step out in front of their vehicles, he said.

“Visitors from other parts of the country and other parts of the world may not be expecting elk or deer to run across the road,” he explained. “And when it begins to get dark, it can be really difficult to see them near the road.”

Aggression in the larger animals may pose a big threat to curious guests, but the park’s smaller, fluffier residents can be even more dangerous in certain situations. Grand Canyon rock squirrels are abundant in the park, especially around the Bright Angel Trail area, where they can scavenge food from trash cans and visitors eating as they hike the trail.

Guests are cautioned never to feed the squirrels or chipmunks and to pick up all garbage, even biodegradable items like apple cores and orange peels. While feeding a squirrel a few potato chips and encouraging it to come closer might seem harmless, Holm pointed out that, like rats, they can also be infested with fleas that carry plague. They, and other small mammals, can also carry the potentially deadly rabies and hantavirus.

Though fleas that carry bubonic plague are very rare, they have been found in northern Arizona, and the park monitors the situation by trapping squirrels and testing any fleas found for the bacteria that causes the plague. GCNP also recommends all pets wear a flea collar or be treated with preventive medicine while at the park.

Holm noted that GCNP has never had a case of bubonic plague.

While the potential for contracting the plague is extremely rare, being bitten while feeding or attempting to touch the animals isn’t. Dozens of visitors are treated at the Grand Canyon clinic every season for animal bites.

“People feeding the squirrels is an ongoing problem,” Holm said. “It’s dangerous for them and for the guests. There’s always a potential for that interaction.”

Squirrels can also chew through or destroy unattended packs searching for food, even when there are people nearby.

Feeding also poses a danger to the animals themselves.

Animals who rely on guests for food can become obese from consuming foods that are not part of their natural diet, like chips, sweets, and french fries. They can also become very aggressive and attack people to take food. Because the animals lose all fear of people, they often must be euthanized to prevent injuries according to GCNP.

The larger problem, however, lies with a growing inability to forage or store enough food to survive the winter. The Grand Canyon is a seasonal destination, and while the park does see visitors during the frigid and snowy winter months, there are not nearly enough to sustain animals who can no longer fend for themselves.