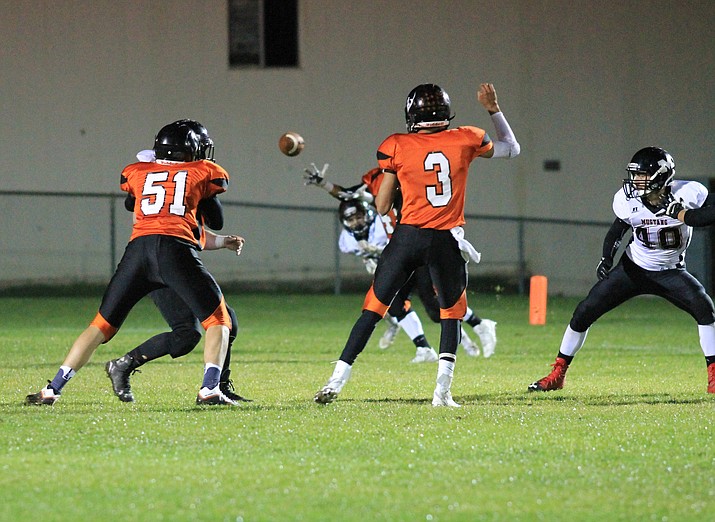 WILLIAMS, Ariz. — The Williams Vikings lengthened their win streak to five with a 36-20 homecoming win against Mogollon Sept. 30.

The Vikings were eager to face the Mustangs who beat them twice and eliminated their playoff hopes in 2015.

“We went into the game feeling we had the better football team,” said head coach Jeff Brownlee.

The Vikings got on the board quickly in the first quarter with a five-yard touchdown run by Tyler Smith who then turned around on the next Viking possession and scored on a 50-yard run.

Brownlee was pleased with the Vikings offense, which included several long sustained drives.

The team had 11 first downs with Martin Soria adding to the offensive attack with 11 carries for 118 yards.

“Between Martin and Tyler we had a great ground attack that day,” Brownlee said.

Smith continued the onslaught into the second quarter with two touchdown runs — one for two-yards and one for six-yards.

Brownlee said his main concern with the Vikings play was the lack of two-point conversions or extra-points.

With a comfortable 24-0 lead coming in after the half, the Vikings were suprised with an offensive attack by the Mustangs.

An injury to the Vikings middle linebacker and good field position gave the Mogollon team an opportunity to move the ball into Viking territory quickly.

“They scored within 15 seconds of the start of the second half,” Brownlee said of the Mustangs first touchdown, a 50-yard run.

The Mustangs then again surprised the Vikings with a 65-yard touchdown run before the Vikings defense slowed the assault.

The Vikings countered the touchdowns with a 20-yard Soria touchdown run to end the quarter still in the lead 30-12.

Vikings quarterback Martin Soria heads downfield for a first down during the game with Mogollon.

“It made us nervous but it was good to see the kids handle adversity like that,” Brownlee said.

The Vikings pulled in a touchdown in the fourth quarter with a screen pass from Soria to Smith for a 20-yard run bringing the score 36-12.

However, the Mustangs did not give up and scored one more touchdown at the end of the fourth quarter which was not enough as the Vikings held on to win 36-20.

“It was closer than what us coaches were comfortable with, but it was a solid win,” Brownlee said.

Brownlee said the win was important for the Vikings.

“This team beat us twice last year,” he said. “The boys really wanted this.”

Brownlee praised the Williams community for the large turnout and support at the game.

“I really appreciate the band and cheerleading too,” Brownlee said. 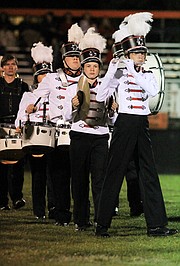 The Vikings marching band takes the field during the homecoming game.

Brownlee said if the Vikings win the next two games they should stay at number three and get a bye in the first round of the state playoffs. The Vikings will then host a game in the second round.

The Vikings hit the road to face Greyhills Oct. 7 and then return home for their final regular season game Oct. 14.