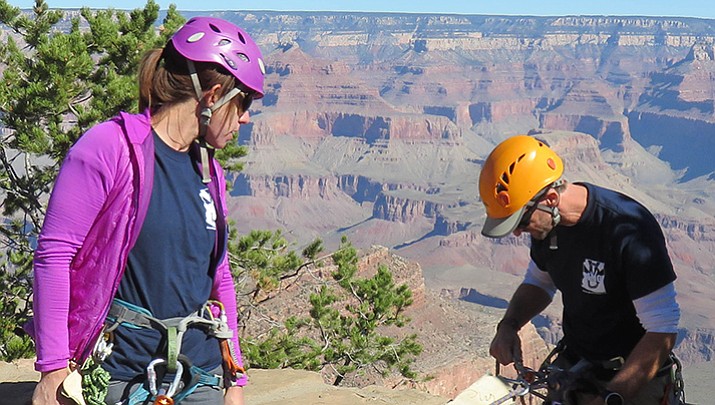 Laura and John Carr secure their rappelling equipment as John prepares to descend over the rim just beneath the El Tovar Hotel.

AMC members Danny Gonzalez and Stephanie Furniss cross check their rappelling equipment as she prepares to belay him over the rim at Pipe Creek Vista.

The Arizona Mountaineering Club, based out of Phoenix, routinely tackles Canyon clean-up projects in inaccessible areas and assists preventive search and rescue teams.

GRAND CANYON, Ariz. — The Grand Canyon sees more than five million visitors per year — it also sees its fair share of litter and trash from those visitors. Most of the time, it’s as simple as a hat blowing off, a cell phone being dropped by accident, or trash blowing out of one of the receptacles on the rim.

That’s where the Arizona Mountaineering Club (AMC) comes in.

The group, based out of Phoenix, makes a few trips a year to the Canyon to tackle a task that few are eager to take on: dangling from a rope over the side of the Rim to pick up trash and debris lodged in otherwise inaccessible places.

More than 40 individuals, from ages five to 63, gathered to clean up different points around the South Rim on Sept. 24.

John Gray, who has led the clean-up project for the last six years, said the AMC has been doing the project for more than 20 years, and coordinates with regional search and rescue groups to put their talents to use.

“We have coordinated this as kind of a group effort where we can give back to the state,” he said. “We have a special and unique skill set where we can get to places that would otherwise be very dangerous to clean up and beautify the area. We love doing it because we’re able to provide a community service.”

The group focuses on areas that have the most impact for visitors, such as Mather Point, Hermit’s Rest, Pipe Creek Vista, and the busy areas around the Bright Angel Trail.

“These are areas that, if you’re just standing at the railing, you can look down and see all kinds of trash,” he explained. “Paper, plastic bags, cigarette butts, hats — it’s all very visible.”

Alongside the trash you would expect to see, like water bottles, tissues, and the odd hats and pieces of clothing, Gray noted that the group also finds a variety of other objects, including cell phones, orange road cones and even a picnic table thrown over the edge.

This year, the group was able to return a cell phone, in working condition, to a visitor who had dropped it over the edge as she was taking photos. Other items included a pacifier, a stuffed dinosaur, a professional photographer’s monopod, umbrellas, an extensive collection of hats and one extremely weathered beverage can with a pull-tab design retired in the 1980s.

The group also goes beyond just picking up common trash and oddities. Gray said the group also uses a small detector to sift through the dirt to collect the coins people have thrown over the rim near Mather and Yavapai Points. The group then returns the coins to the National Park Service for display. Throughout the course of the project, the group generally collects around half of a five-gallon bucket full of coins from all over the world.

John Furniss, who has participated in the project for around five years, noted that more environmental awareness and park initiatives, such as no longer selling plastic water bottles, have lessened the amount of garbage and debris over the years.

“The amount has gone down considerably, especially in the last three years,” he said. “We noticed a huge drop off from one year to the next when the NPS decided to cover all of the trash cans. That cut down considerably on all the trash that blew out of the cans and over the edge.”

Furniss also said that, along with the opportunity to promote social awareness and make a contribution to the Grand Canyon, there are some pretty great perks.

“To set up anchors on the edge of the Grand Canyon (with NPS approval, of course) and rappel over the edge to pick up trash is an amazing opportunity,” he said. “Also, the interaction with the public is just phenomenal, it’s truly an international experience.”

“We’re giving back to the community, but it’s also a lot of fun,” he said. “The Grand Canyon is a beautiful place to be in. Where else are you going to be, where you can just sit there on a rope and enjoy the Canyon from a perspective that nobody else gets to see?”