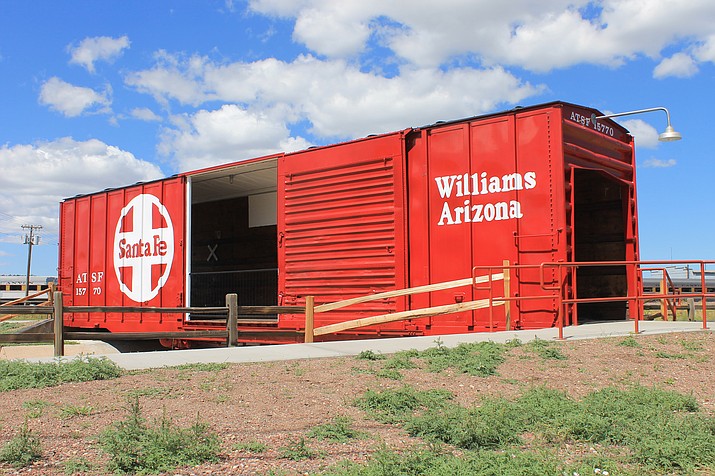 The Arizona State Railroad Museum group has contributed several vintage railroad cars and other items to the city of Williams.

The museum recently worked with the city on refurbishing and installing a boxcar bridge on Railroad Ave.

Museum president Al Richmond and Steve Nielson of FDSG spoke to the Williams City Council about plans for the Arizona State Railroad Museum at their Sept. 22 meeting. Nielson discussed what the group does and how they hope to help the railroad museum.

Nielson said the group is under contract now with the museum to find low cost financing and creative fundraising methods to bring the project to fruition. The plan to do this with collaborative means and take the profit motive out of it. They plan to use a nonprofit foundation as the owner- borrower which gives them access to low cost financing for the museum.

“We don’t use expensive capital, there is no ownership,” Nielson said. “We just bring to bear the resources necessary to build a project like this at the lowest possible cost.

Nielson said the group is working with the architect, a construction company and the James Megellas Foundation. The group hopes that with stakeholder and community support, the foundation will secure the funds and work can soon begin on the proposed museum.

The group intends to put the museum on 25 acres near the Grand Canyon Railway spur off of Rodeo Road and within sight of I-40. The plan has been modified from the original design to include a small railroad operation that circles the 25-acre site. It will also have a children’s interactive railroad program, the museum, an amphitheater and workforce housing.

Nielson estimates the cost between $23 and 25 million dollars. He said FDSG is working to outline a revenue stream to encourage investors but is looking to begin construction in 2017. He said they would like to open the museum in the spring of 2018.

Following the presentation by FDSG, Richmond approached the council to request a waiver of building fees for the museum. He said the railroad museum organization has already contributed positively to the city with the installation of the gateway arches, the railroad park, and the railcar bridge. Richmond said the fees for the museum are $52,944. The council discussed the fees with Richmond and decided to approve the waiver.

Despite the disbanding of the Chamber of Commerce, Carol Glassburn and the Williams Clean and Beautiful committee will continue to provide volunteer services to the community. The group plans to file for 501c3 non-profit status. The city will continue to maintain the blue highway signs and the funds collected from the businesses for the advertisement will become a budget line item for future events within the city, and not limited to the use by any one organization.

Chief of Police Herman Nixon explained the CodeRED emergency notification system and how it could work for the city. He said the county would prorate $7,000 for the first year, and after that, the annual cost would be $10,000. Mayor John Moore pointed out that it is just a matter of time when the city will need of a service like CodeRED. City Manager Skylor Miller said the proposal is being reviewed by the city’s legal team right now.

A canvass of votes for the primary election held August 30 was taken and the council adopted the results with Frank McNelly and Jim Wurgler retaining their council seats while John Moore retained his position as mayor. Dawn Trapp and George Otero, who are running for the final council seat, will move to the general election in November.

Councilmembers approved a contract with Chad Thomas for airport coordinator services. Thomas will be operating an aircraft maintenance business in the large airport hangar and has agreed to provide airport services as outlined. Thomas will oversee certain duties at the airport in return for a $500 per month lease with the city for the use of the hangar.

Skylor Miller approached the council about switching internet service providers. He said the city of Williams currently utilizes multiple vendors to supply internet connectivity to city facilities. He said the speed and cost of the services vary and there have been many complaints about the quality.

With Miller’s recommendation, the council approved switching the entire city to Hospitality Wireless, a branch of the city’s current IT professionals. Miller said the switch will not cost the city any additional money but will provide better service at higher speeds.