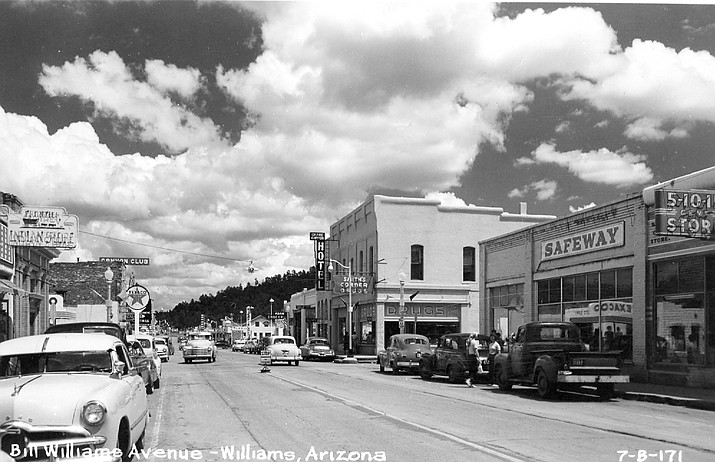 Williams was a popular stop-over during the 60 years Route 66 passed through the town. The above photo shows the downtown area in the 1940s.

WILLIAMS, Ariz. — In several respects, the automobile was one of the most significant inventions of the twentieth century, but often overlooked and equally significant is the development of the roads those automobiles traveled upon.

Route 66 was not the first cross-country road nor is it the oldest road, but the highway has lodged itself into the imagination of travelers and became one of the best known and most identified roads in the world.

It was a highway created by the demands of a rapidly changing America. For some, it represents freedom of the road, to others a path to a better life. Route 66 celebrates its ninetieth birthday this month and despite being made obsolete obsolete by Interstate 40 in the 1980s, it remains a beloved icon and memory for many who traveled its path.

Route 66 was created in 1926 when the Bureau of Roads launched the nation’s first Federal highway system. It cobbled together and linked local, state and national roads. The U.S. Highway Association actively promoted the road and it quickly became popular as the shortest, most scenic route from Chicago to Los Angeles.

Many of the sections of Route 66 began as wagon roads and Native American trade routes from the Great Plains to coastal California. Several of these sections were natural routes across easy terrain and many were near water sources. Route 66 in northern Arizona utilized the Beale Road and the National Old Trails Highway in many sections.

Edward F. Beale, a retired Navy lieutenant, was chosen to chart a road across the southwest to open the area following the end of the Mexican-American War in 1848. Early railroad engineers also followed the Beale Road and towns and settlements soon grew up along the tracks and roads were created to link those towns’ main streets.

Despite the Beale Road, between 1863 and 1912, Arizona did not have much of a road system. As the automobile became popular in the early 1920s, road-building became important and a boom in road construction occurred throughout the state.

The Federal Aid Road Act, passed in 1916, gave money for The National Old Trails Highway across northern Arizona, which became part of the nation’s first system of Federal highways, eventually becoming part of U.S. Route 66 in 1926. Most of the 400 miles of the Old Trails Highway was not paved. 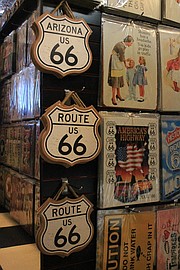 The Federal Highway Act of 1921 mapped and provided signage to existing roads and during that time Highways Association President Cyrus Avery pushed for a road through Tulsa, Oklahoma that would originate in Chicago.

Most highways prior to Route 66 went east-west or north-south. Route 66 would be a diagonal route that linked several rural communities in the Midwest to Chicago. It became an important route for the trucking industry despite not being completely paved until the mid-1930s.

During the Great Depression (1929-1939), Route 66 became a popular route for thousands of hopeful Midwesterners trying to find their way to California to seek a better life.

The plight of those stuck in the Great Depression was immortalized in John Steinbeck’s “The Grapes of Wrath” in 1939. Many connected the plight of the people with the road itself.

Steinbeck’s referral to Route 66 as the “Mother Road” stuck and helped symbolize the route as the road to opportunity.

In 1926, only 800 miles of designed Route 66 were paved. In the late 1930s, many unemployed youth found jobs as laborers on road gangs, and as a result of this monumental effort, the entire route was reported as continuously paved in 1938.

The completion of the paving was significant to the nation’s war effort during World War II. The country needed improved highways for rapid mobilization. The War Department utilized the west as a military training ground due to its wide-open isolation and dry weather.

The federal government put together $70 billion in capital projects in California, which created thousands of jobs in many entirely new industries. The resulting mass migration moved 1 million people from the northeast to California, Oregon and Washington between 1940 and 1943. The population increased almost 40 percent in those states.

The economy improved near the end of the war and Americans began to take more vacations by automobile. Route 66 held many scenic wonders nearby, with Arizona offering attractions such as the Grand Canyon and Petrified Forest.

Following the war, soldiers, sailors, and other military men who had experienced California, Arizona, New Mexico, Oklahoma, and Texas during military training abandoned the harsh winters of the northeast for the sunny west. Route 66 facilitated their relocation.

One such former soldier was Robert William Troup, Jr., who traveled Route 66 following the war and penned the now famous tune “Get Your Kicks on Route 66,” which became a catch phrase for countless motorists who traveled the route between Chicago and the Pacific Coast.

Just as the New Deal provided employment on the road at the end of the Great Depression, numerous tourist courts, garages, gas stations and diners popped up and spurred economic growth after the road’s completion. The demands of this new tourism gave rise to competition among owners who used neon signs, gimmicks and over the top antics to draw travelers to their facilities.

Visitors to Northern Arizona can still experience the charm of the Route 66 era at diners and hotels in Williams, including Goldie’s Diner in downtown Williams.

Travel increased following the war as rationing and travel restrictions were lifted. Automobile ownership grew dramatically over the next 10 years.

Tourist facilities evolved during this time with many travelers staying in motels. Motels evolved from auto camps. Auto camps developed as town residents roped off areas travelers could stay for the night. The owners would provide water, wood, toilets, showers and laundry facilities for the travelers.

Eventually, auto camps and cabin camps became motor courts where all the rooms were under a single roof. Motor courts offered additional amenities, such as adjoining restaurants, souvenir shops, and swimming pools.

Many other townspeople thrived with the development of service stations. Most buildings were unique but often associated with a gasoline company. Many expanded to include multiple pumps, service bays and tire repair.

During the 1960s, Route 66 was further immortalized with the television series, “Route 66,” starring Martin Milner and George Maharis. The show helped bring Americans back to the route looking for new adventure.

Postwar travel and the revival of the automobile industry took its toll on the condition of Route 66. In the mid-1950’s, support grew for a safer more reliable interstate system. It was further fueled by Dwight D. Eisenhower, who witnessed the strategic value of Germany’s Autobahn.

Congress responded to the president by passing the Federal Aid Highway Act of 1956, which underwrote the cost of a national interstate system.

Due to this passage, nearly all segments of original Route 66 were bypassed in 1970 by a modern four-lane highway.

The crumbling and outdated remains of Route 66 completely fell out of the federal interstate system in October 1984, when the final section of the route was bypassed by Interstate 40 in Williams, Arizona.

Route 66 was largely abandoned following the completion of the interstate system, although several stretches are still in use today. Several grassroots organizations spurred a resurgence of nostalgia for the old road and an effort is being made now to preserve what remains of the road and businesses of historic Route 66.

Dozens of cities along the old route have also found a niche by recreating what life was like on old Route 66.

Williams is one of those cities. Several retail stores, motels and restaurants cater to those seeking to rekindle their romance with the road.

Those seeking to experience Route 66 firsthand can find several sections of the road in the area. Pittman Valley to Parks has a portion of Route 66 that is well maintained and used regularly by local residents.

Several unmaintained road segments are located in the Ash Fork area. One section of Route 66 lies just north of I-40 and another lies southwest of Ash Fork. West of Ash Fork travelers can drive maintained Route 66 through Seligman, Peach Springs and end in Kingman.

Travelers can also drive Route 66 through the Williams Historic Business District and Urban Route 66 in downtown Williams, which were added to the National Register of Historic Places in 1984 and 1989, respectively.

Out of the past: the last 58 years of education in Williams (part 3 of 3)
Historic road goes through Williams, Seligman
Bill would put Route 66 under care of National Park Service
Route 66 Historic Trail bill garners support in Senate
Editorial: Preserving Route 66 is a good investment for the future
Event Calendar